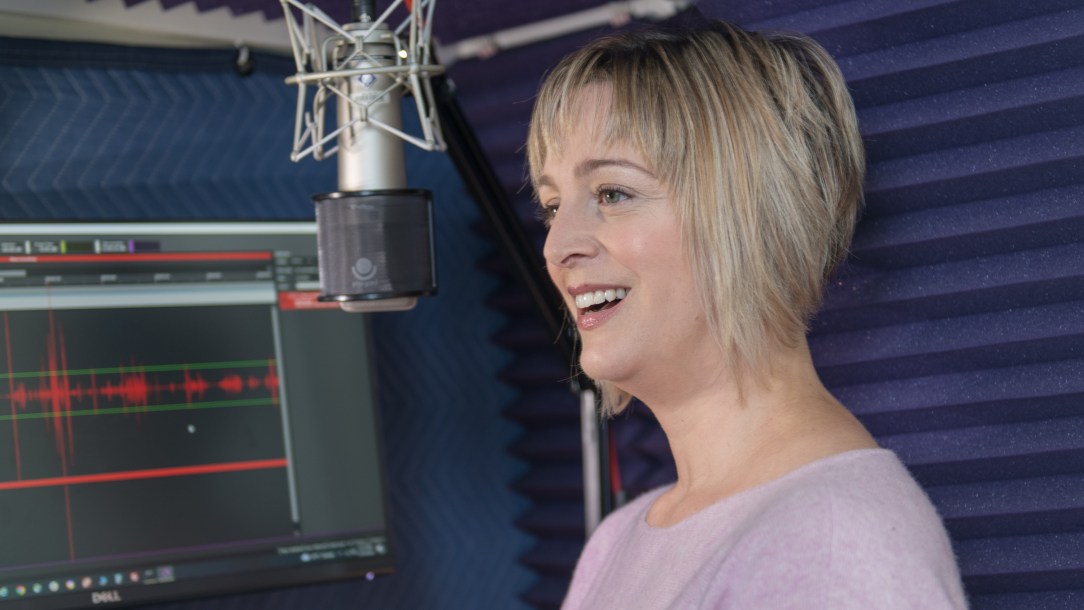 Support for NPR is brought to you by a Mills alum! Jessica Webner Hansen ’96 loans her dulcet tones to voiceovers and coaching.

Jessica Webner Hansen ’96 may not be a household name, but millions of people hear her on NPR every week.

While Jessica Webner Hansen ’96 has a long, accomplished background in acting, it’s her voice that landed her in the recent film Tár, starring Cate Blanchett. And she owes that opportunity to the fact that every week, some 26 million people hear Hansen’s smooth, resonant voice via her job as NPR’s funding credits announcer.

If you regularly tune into your local public radio station, you’ve undoubtedly heard Hansen list the sponsors of familiar shows such as Fresh Air and All Things Considered. Her long, winding road—from professional voice actor, coach (including to NPR’s team), and actress to co-founder of DC’s Lean & Hungry Theater—wasn’t the career trajectory she initially expected, but one that was perhaps tailor-made for her. After graduating from Mills, she moved to Washington, DC to live near her father. “He took me to an acting conservatory, which led to some acting classes,” she says. “A few years later, I moved to Minneapolis and a series of jobs, acting in community theater [productions] at night.”

A friend suggested Hansen consider a master’s degree in acting, which she then pursued at Brandeis University near Boston, graduating in 2005. It’s the combination of her experience at both schools that prepared her for her career, Hansen says. “Grad school was rigorous and demanding, but it was my time at Mills that prepared me to transition to adulthood,” she says. “I felt nurtured and challenged by professors, who were interested in me becoming my best version of myself.”

With this solid foundation, Hansen had the confidence needed to perform on stages across the country, as well as on television. Her credits include guest-starring roles on NBC’s Parks & Recreation and HBO’s Veep, as well as parts in independent films and commercials.

It was Hansen’s voice, however, that led her to NPR. “Through Lean & Hungry Theater, we created audio versions of Shakespeare and other classics on school reading lists,” she explains. “I worked with WAMU, the local NPR station, to air a show, and one thing led to another.”

Hansen began a six-month contract voicing funding credits for NPR’s podcasts and online presence some eight years ago, and after that, her role kept expanding. “I never considered this as a career, but when the opportunity came up, I discovered that I loved working with the people of NPR,” she says.

Like many fields, Hansen’s changed with the onset of the pandemic. “All my work was suddenly online,” she says, “and that led me to be creative about how to coach people to use their voices.”

With that evolution, Hansen decided to move to part-time with NPR, allowing her to focus more on voice coaching and voiceovers. She works with entrepreneurs, executives, students, and more, helping them expand their voices for podcasts, live events, interviews, or any professional speaking. Underneath it all, she credits her time at Mills. “My time there was magical,” she says.