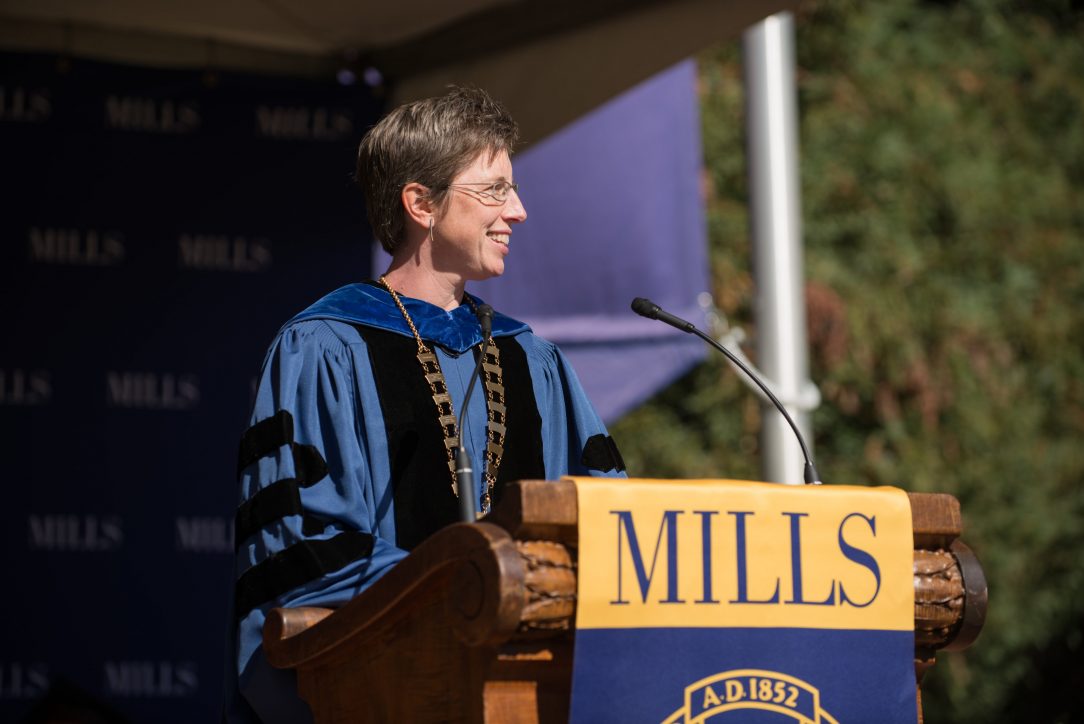 Why the world needs Mills

On the event of her inauguration, the 14th president of Mills College reflects on the adaptability that has marked the College throughout its history and observes how Mills graduates make positive change in society.

Alumnae, faculty, students, and friends of the College, including representatives from 34 other universities, gathered for Convocation on September 23 to witness the inauguration of Beth Hillman as the 14th president of Mills College. This article is adapted from her address that day.

The world needs Mills because Mills has evolved, adapting to the changing world around us. There have been many iterations of Mills College. We’ve adapted to meet the demands of each moment in our history. Far from being a constant, Mills has been a variable.

Mills has literally turned things around more than once. Lisser Hall, built as a Greek Revival building, was converted to Spanish colonial style by architect Walter Ratcliff and reversed—so it now faces the opposite direction from its original design, which was oriented toward Wetmore Gate, the College’s primary entrance at the time.

Other Mills buildings have also been inverted: The Vera M. Long Building for the Social Sciences used to face not toward the center of our current campus, but backward, evident in the gorgeous, tiled entrance that is now a little-traveled back door. The Mills College Art Museum was also turned around because of our changing cityscape and campus, as the Oakland streetcar that once dropped patrons at the door stopped running and our campus grew behind the former back of the museum.

Growth as well as turnarounds have characterized Mills, which at its start awarded only a handful of high school—not college—diplomas each year. Over the past 12 months alone, more than 500 students earned bachelor’s, master’s, and doctoral degrees from Mills. In 1852, when the seminary that became Mills was first established, there were fewer than 93,000 Californians, perhaps 1,500 of whom lived in Oakland—a far cry from the thriving, complicated state of 39 million and city of 400,000 that surrounds us today.

When Mills Seminary was officially incorporated as Mills College in 1885, we reported, among other assets: 4,000 volumes in the library, 22 pianos, three of them grand, 400 framed pictures and 600 unframed pictures, and five horses and 10 cows. Today, we have more than 262,000 volumes in our library; 54 pianos, 23 of them grand; a collection of more than 11,000 works of art; and no horses and no cows.

Today, more than half our students are persons of color, our faculty nearly one third. In terms of racial and ethnic diversity, Mills today looks a lot like California. We fit right into a state and region that have led the way in recognizing civil rights and human dignity by being a place where our students—nearly half of whom identify as LGBTQ or other when asked about their sexual orientation and gender identity—can be, and find, themselves.

It’s not only the color and number of Mills students that have changed. It’s also their ways of life. In 1885, Mills’ summer vacation was only nine weeks long, just enough “to allow all the pupils to return to their homes.” Those early Mills students were young, unmarried, and childless. They were well-versed in Greek and Latin classics prior to admission, attended to their studies full-time, and did not expect to undertake paid work.

Today, most of our students not only expect to work for pay after graduation, they work during their years at Mills, both to cover their expenses and to build bridges to rewarding careers. Last summer, Mills itself employed 138 students who worked an average of eleven weeks each; many others spent the entire summer working in paid and unpaid positions.

And today, Mills has won top honors as a best-value college in a crowded landscape of higher education options in the United States. We’ve become a place where an extraordinary education— whether in modern dance or data science, biology or music, sociology or business—is affordable and accessible to an inclusive community of thinkers, artists, and innovators. Second, the world needs us because our students change themselves, and then the world.

All of the students who have come to Mills, now and in the past, grow and learn and change, often profoundly. Mills is not a place for those satisfied with who they are and what they know. Those who want to find a new path or a more fully realized self are the students who belong at Mills.

Our students change through their interaction with our faculty, who themselves set the bar high for adaptability to a changing world. Mills faculty in the natural sciences have found new projects, and developed new areas of expertise, to pursue research alongside their students. Mills’ English department includes scholars whose work in the digital humanities applies the newest of data analysis methods to well-traveled texts. And all of our faculty seek to teach in ways that meet the intense engagement that Mills students bring to their studies, whether in studio arts or public policy or psychology.

Mills students and graduates have forged remarkable lives that defy easy categorization. I cannot do justice to the rich tapestry of the many thousands of Mills alumnae and alumni, but I can share the stories of three—separated by years, but unified by this College—to give you a sense of their achievements and impact:

Emma Wixon, who graduated in the class of 1876, was sent to Mills by her father, a doctor whose fortune was made and lost mining in the Nevada territory, after her mother had died. A musical prodigy who had entertained miners with her singing as a child, Emma’s talent and charisma captured the attention of Susan Mills, co-founder and fourth president of Mills College, who arranged for Emma to study in Europe. Known worldwide as “Emma Nevada,” she sang before kings and queens, eventually returning in 1902 to perform before a packed house in the just-opened Lisser Hall.

Born and raised in Beijing, Patsy Chen Peng ’51, MA ’53, endured the hardships of World War II in China, where her boldness and language facility won her a position as an English secretary to a Chinese general supporting the United States’ 14th Air Force. Soon after, Patsy accepted a US presidential scholarship to Mills, where she found her reading assignments nearly too much to bear at first. With the help of a supportive dean of students, she reduced her course load and persevered, earning bachelor’s and master’s degrees in education and child development that were a springboard to her later work as a teacher, fundraiser, organizer, artist—and benefactor of the current Chinese language program at Mills.

And finally, Bonnie Hill ’75 studied education and went on to a dazzling career as an executive in business and government. A graduate of McClymonds High School in Oakland, she worked full time while studying at Mills and caring for her husband and young daughter. After graduating, she was appointed assistant dean of student services and interim director of ethnic studies at Mills. She later became the first African American woman to direct the federal Office of Consumer Affairs, vice president of the Times Mirror company and CEO of the Times Mirror foundation, dean of the school of commerce at the University of Virginia, and board member of several Fortune 500 companies.

Finally, the world needs Mills because our world could benefit from some change. Education is one of the answers to virtually every imaginable problem. We need more education, and more transformation in our educational institutions, to deal with issues as tough and complex as climate change, racial and gender violence, infectious disease, and religious intolerance.

We also need better education to deal with a more concrete, specific problem that’s close to home for Mills and others institutions committed to gender justice. At a college dedicated to women-centered education and supported by the contributions of so many women, the unequal pay of women and men is especially troubling.

It is widely known that women are paid less than men doing similar work, and this is true across virtually every demographic. Even when we control for variables like region, work experience, race, occupation, and industry, the fact that workers are women correlates to lower pay.

Women in the United States who work full time are paid 79 cents for every dollar paid to men who work full time. For Latinas, the figure is 55 cents. For African American women, 60. The income of transgender women falls by an average of one-third after they transition. Lesbians earn less than men; young women earn less than young men; older women earn less than older men. When large numbers of women move into a field previously occupied by men, wages drop. What helps? Education. It changes the score. It rebalances the scales. What we do at Mills helps every one of those demographic groups. My faith in Mills, and in the power of education to remake ourselves and our world, is the reason that I belong at Mills. I’ve been lucky enough to change many times. I’ve been an orbital analyst and a saxophone player, an air force officer and a history professor, an advocate and expert witness for ending discrimination based on sexual orientation and gender identity— and an academic administrator. I find transformation in self and surroundings both exciting and inevitable.

Yet many aspects of me have stayed the same. I’m still a twin, and my sister Jean Marie still pushes me and keeps me honest. I’m still a younger sister to my brothers, still a mother, and still in love with my brave, generous, powerful wife, Trish.

Likewise, notwithstanding all the change I’ve trumpeted, some things have stayed the same at Mills. Despite its origins as a seminary, Mills was always an “undenominational” institution, unwilling to limit its community to one set of Christian beliefs at the start, and now open to persons of any, or no, tradition of faith. Mary Atkins, who taught and served as principal at Mills during the 1850s and ’60s, hoped her students would be “useful, progressive, [and] intelligent,” a hope that many of us here today share. For all the change in Mills’ physical space, Helen Lefkowitz Horowitz, a historian of women’s colleges, described the design of Mills as governed by “hope rather than fear.” That expansiveness, that hope, remains today.

Aurelia Henry Reinhardt, a transformative president of Mills, spoke in Palo Alto in 1941 about the future of women in the university. She said that we “must cease to apologize for the possession of intellect or talent” and opt instead to “come of age … unself-consciously.” Mills will always be coming of age, and so will our students. I look forward to seeing that happen, unapologetically and with tremendous hope for the future.