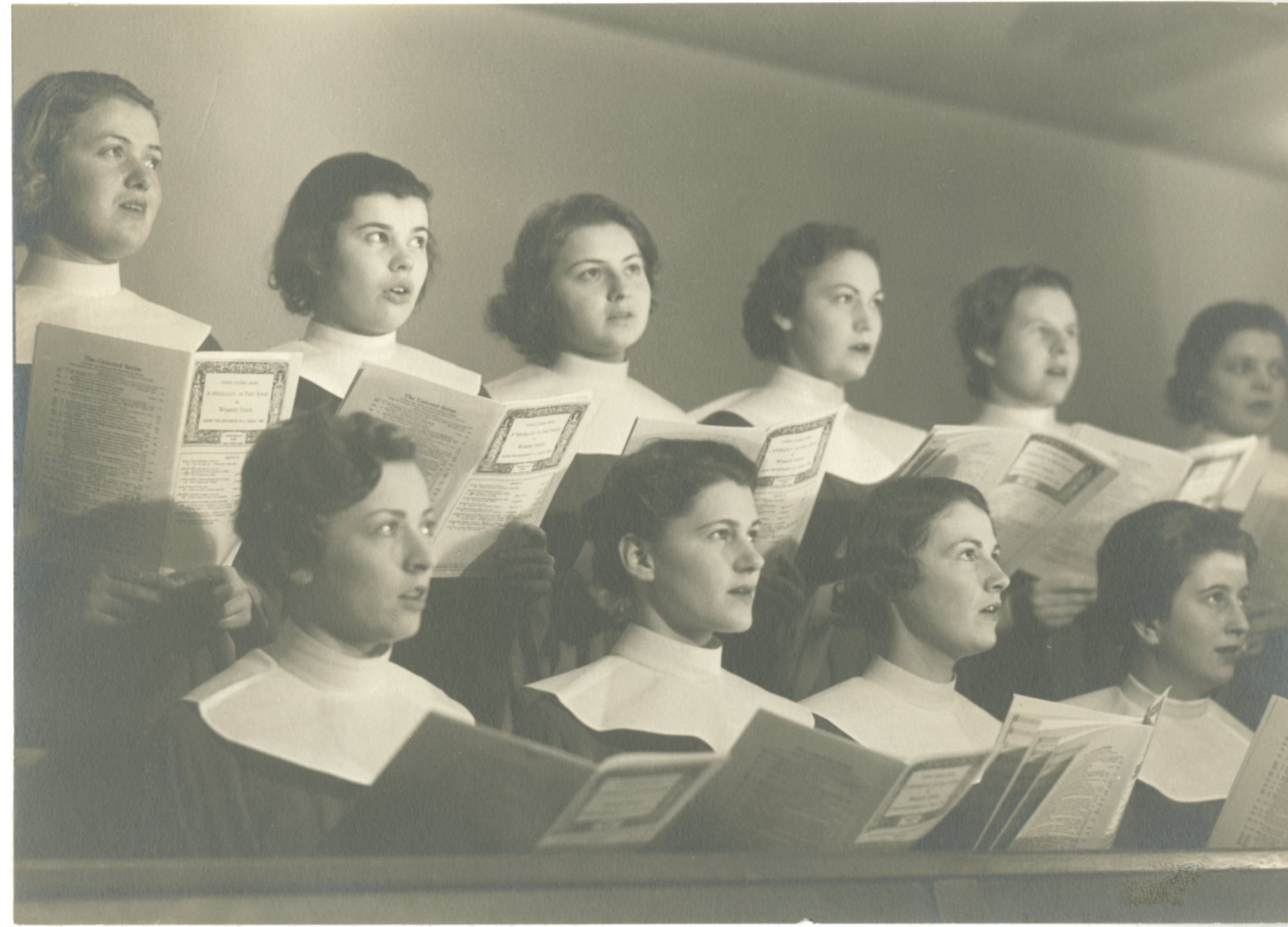 Voices of our sisters

Music binds people together as a community, whether around a campfire, in religious services, or in any other setting. The 1925 Song Book provides a glimpse into the traditions and sentiments of Mills Girls nearly a century ago.

Music has always played a pivotal role in the life of Mills College and its students. Since the institution’s founding in 1852 as the Young Ladies’ Seminary in Benicia, California, music was regarded as a fundamental part of the formation of a young lady and was a respected and prestigious area of academic study. Since Mills was established as a nonsectarian school conducted on Christian principles, a college choir performed at chapel services and other functions as a matter of course. Music also permeated the less official side of student life, particularly in the first half of the twentieth century, and lyrics from those songs provide a window on the traditions and practices that gave Mills its unique character.

In 1925, a student committee compiled a set of songs important to the culture of the campus, one of seven song books that have been published throughout the history of the College. The 1925 Song Book contains popular tunes of the day, as well as others written or adapted by students specifically to build identity of their classes, mark ceremonious events, and just for fun. From dining in Mills Hall to taking leisurely excursions down the “Ave” (as Seminary Avenue was colloquially referred to), the songs paint a picture of daily life of the Mills Girl of that decade. The compilation features songs that declare love and dedication to the College, such as “Hail Thee Mills” and the College hymn, “Fires of Wisdom,” penned by Fanny Rouse Carpenter, a graduate of the Class of 1873. The number of songs for each specific class—from the first-year student declaration “We’re Here Mills College” to “The Wail of the Junior Lass” to “It’s a Long Way to Senior Standing”—show that class affiliation, and affinity between classes, was a strong sentiment. The “Sister Class Songs” appear to be meant for groups of students to sing to each other at initiation and other events throughout the year. From “’26 to ’24, an even number class song”:

The two short years we’ve been with you

And in our hearts we mem’ries keep

Of gladness and of cheer

For you must know our love is deep

Many songs depict bygone aspects of Mills culture and traditions long past. “Circling the Oval,” with lyrics by Catherine Easterling ’24 and music by Marian Handy ’23, describes the traditional lantern ceremony:

Run for the oval Mills girls all.

There by our stately old Mills Hall,

For ev’ry student a link in the chain,

Singing together they’re marching a long

Each link well-wrought joins firm with the next

Circ’ling the oval with fellowship strong.

The lanterns winding down the hill

Twinkling against the shadows dim,

Light the procession of the year

The oval where Seniors sing farewell.

The way this tradition used to be conducted contrasts drastically with the present practice. We can infer from these lyrics (and the yearbook photo above) that the procession ran down the hill to El Campanil. Today, the custom has been rekindled— but it happens before sundown, and consists of the seniors walking with lanterns to the pond outside the Music Building.

Evidence from other songs in the 1925 Song Book, coupled with yearbook descriptions, indicate that Christmas festivities at Mills were likewise much different than they are today. “The Boar’s Head,” a centuries-old English carol with part-Latin lyrics, apparently accompanied a pre-holiday feast, pictured at left. A handful of colleges in England and the United States still sing this song as part of their winter traditions, but Mills is not one of them.

Other songs reflect timeless aspects of life on campus. The bells of El Campanil, which ring every quarter-hour to this day, appear in several entries, such as “Those Old Mills Days,” which dreamily sings of

…the happiest moments of my life,

You can hear those voices sing,

You can hear those old chimes ring.

This is one of the few aspects of life that the Mills student of today experiences just as the Mills Girl of a century ago did, although the students of yesterday would have known each bell by name: Prudence, Long-Suffering, and Peace, to name a few. And “Springtime on the Campus” combines a love for the beauty of Mills with an allegiance that many students—and alumnae—surely still feel:

Oh the lake is rippling softly,

And the sun-dusk’d poppies sway,

‘Till the wind lulls in the evening,

And the colors fade away.

And we need no spoken vow,

Not all student songs are formal or sentimental. In fact, many must have been sung informally, in leisure time—perhaps after hours, well out of earshot of teachers and deans. “Don’t Bother” expresses sentiments familiar to students everywhere, particularly before early Monday classes: Ding, dong, ding says the rising bell

Sleep all day the nurse will bring a tray

Never make a bed or pick up your clothes,

Your roommate will love you don’t you suppose?

Further verses cheerily warn against “spending all you have” and not letting the “China boys rattle you” (which likely refers to table servers who flirted with the students).

Since the College’s beginnings, music has been an integral part of Mills’ vision and culture. Harmonies echo through the halls of what has grown into a fine liberal arts college, helping to carry the College’s artistic heritage through to the present. In the third stanza of “Fires of Wisdom,” added by Kathy Bennion Barrett ’64 to Carpenter’s original lyrics, the voices of students singing “for generations still” support the hymn’s concluding statement of faith that Mills–and the songs of its students—will endure far into the future:

Although the earth may tremble

These halls will ring and fill

With voices of our sisters

This story was adapted from de la Torre’s senior thesis paper, “How Music Shaped the Mills Campus Culture in the Early to Mid-Twentieth Century (1916–1946).”