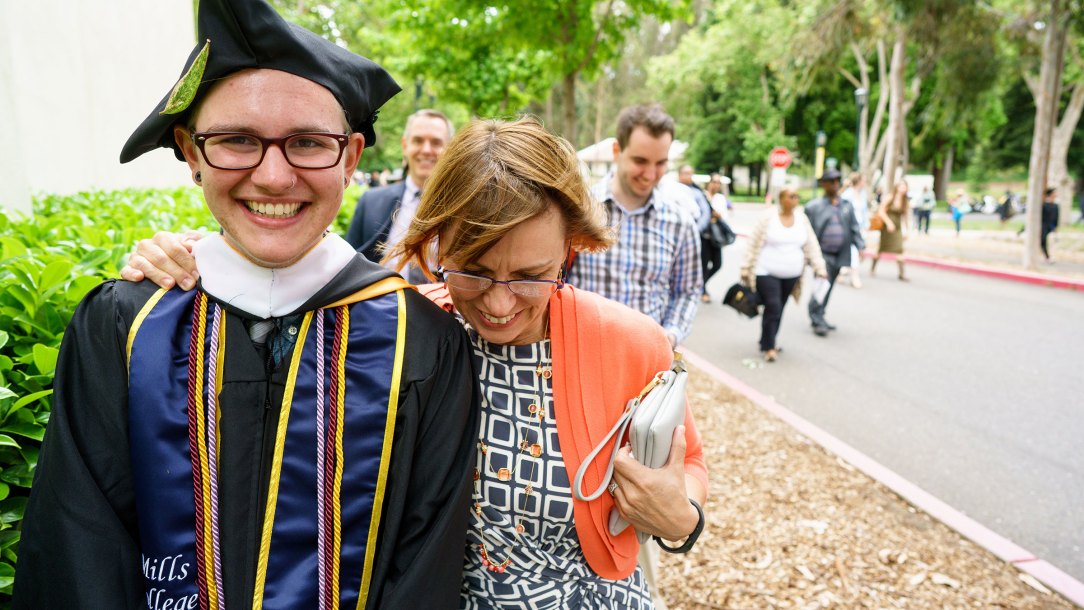 The final installment in our Transitions series goes back just eight years to the formation and introduction of the Mills transgender admissions policy.

As Mills College currently faces a major change, the Quarterly takes a look at some of the other transitions the College has experienced over the course of its esteemed 170-year history. This is the final story in a series of three.

Mills College stands today on top of a long history of including the traditionally excluded. Its very existence came from a commitment on the part of Cyrus and Susan Mills to provide a college education for women at a time when their options were few. Building on that, during President Aurelia Reinhardt’s tenure, she reached out to young women from China and Japan and encouraged them to attend Mills; during WWII, she opened the gates to European Jewish refugees. Over time, Mills expanded further and welcomed “resumers” (students aged 23 and older), and it became a haven for women of color and first-generation college students. To support an increasingly diverse population, Mills was one of the first institutions to offer ethnic studies (in 1969) and, more recently, a queer studies minor.

In keeping with that legacy of inclusivity, Mills again took the lead in 2014 as the first women’s college to implement a formal admissions policy for transgender women. Until then, trans women applicants were admitted on a case-by-case basis, but according to Brian O’Rourke, then vice president for admissions management, the College needed to make it official. “The purpose of this policy is that we didn’t want students to feel excluded in the application process,” he told the San Francisco Chronicle in 2014. “Having a written policy should make the application process easier.”

At the time, women’s colleges around the country were actively discussing transgender inclusion. The issue hit national media in 2013 when transgender student Calliope Wong applied to Smith and was rejected because one of her documents listed her as male. Eloise Stiglitz, vice president of student life and dean of students at the College from 2013 to 2015, says there was an uproar on the Mills campus after the Smith incident. “If we were to be a school to support and educate women-identified people, then we should be admitting trans students,” Stiglitz says.

Almost in anticipation of this national discussion, in 2011 President Alecia DeCoudreaux requested that a committee study and issue a report on inclusion for transgender and gender-fluid students. Composed of faculty, staff, and two students, the committee made recommendations on how to improve the admissions and recruitment of trans women students, as well as on classroom experience, restrooms, housing, athletics, and public safety.

As a nonbinary student voice on campus, Sonj Basha ’15 was asked to join the committee. They came to Mills as a resumer/transfer student, attracted to the College for its commitment to social justice. “[Mills] felt like a traditional structure with a radical undertone,” they explain. Basha, founder and creative director of the embodiment project *UNlearning & LIBeration, says that the committee’s work ended up impacting the institution, setting an example for the work that other colleges could do. Following Mills’ announcement of its transgender policy, Mount Holyoke, Bryn Mawr, Simmons, and Scripps implemented similar policies, prompting a slew of national coverage on the role of women’s colleges.

The other student on the committee, Quintin (Crownover) Bailey ’16 (above) says that the text of the report was written by faculty and staff, while the students were asked to comment and make recommendations. “The student body was ahead of the College as an institution in terms of welcoming, accepting, [and] holding space for trans folks,” says Bailey.

Bailey, who now holds a PsyD in clinical psychology and works as a therapist, says the staffers on the committee had good intentions, but there was a lot of pushback from the Admissions Office, which didn’t agree with marketing the College as a “historically women’s college” rather than just a women’s college. “There were disagreements on how that would impact messaging to potential students, and that somehow, it would weaken the purpose of the College,” Bailey notes.

Susan Stryker, a prominent trans woman scholar and the Barbara Lee Distinguished Chair in Women’s Leadership for 2020–22, says the policy was a smart move in these challenging times for liberal arts colleges, where there is competition across higher education for fewer and fewer students. “I think marketing Mills as a place that is especially welcoming to trans and nonbinary students takes nothing from cisgender students and alums,” she remarks.

According to Stiglitz, however, who also worked on the committee, some alums were unhappy about the policy. They felt that, as a women’s college, “admitting trans women and men was veering off our mission.” Upon the policy’s release, the Quarterly received several letters in support of the policy, though the Office of Alumnae Relations did record a handful of complaints as well. O’Rourke expressed a different opinion: On the KQED radio program Forum in 2014, he told show host Michael Krasny, “Women’s colleges were founded and exist in order to question traditional gender identity and gender stereotypes.”

In 2014, The Campanil summarized the 387-word policy as follows: The new policy states that the College admits self-identified women and students who are assigned to female sex at birth and identify as transgender or genderfluid. Students who have legally changed their sex to male will not be considered for admission; however, students who transition to male after coming to Mills will be allowed to stay until they graduate.

One such trans man was Bailey, who was a high-profile student at Mills and president of the ASMC. He says the culture on campus at the time was really “uplifting and exciting” for him, and for the first time, he was popular and well-liked. Bailey chose Mills because he knew the College to be an inclusive space for queer women. Having questioned issues of gender in high school, he thought, “If I’m a woman, I’ll be able to figure out what type of woman I am at Mills.” He was right: Mills offered him the support and space to discover that he was “in fact, not a woman.” He transitioned while still a student.

Looking at the campus from another direction was trans woman Erin Armstrong ’16, MPP/MBA ’18. “It was an exciting time to be a visible transgender leader at Mills,” she says. “There were a ton of people who identified as nonbinary, queer, or questioning, because college is a great place to explore who you really are as a person.” Armstrong, who had lived as a woman for 10 years before coming to Mills, says she was one of three trans women at Mills when she transferred from Berkeley City College. In 2014, O’Rourke confirmed that of the approximately 1,000 undergraduates at Mills, three to five were transgender or identified as something other than what they were assigned at birth.

Armstrong had hoped that she could blend in on campus, but she transferred just after the announcement of the formalized transgender policy. “When I arrived on campus that fall, it felt like there were a lot of eyes on me,” she says. “Like everyone was looking for the trans woman.” That was the opposite of what Armstrong expected, but as a trans advocate and activist, she jumped into the discussion. She soon looked for clubs to join and found that although there were many gay/lesbian clubs, there was nothing that had a “trans or gender non-conforming component.” Armstrong then received the suggestion that she might want to revive the Gender Splendor Club. She did, and the club went on to sponsor the annual Transgender Day of Remembrance and Transgender Week of Visibility.

Chicora Martin, vice president of student life and dean of students since 2015, relays that more recent students have said they feel that Mills has provided a safe space for them to express themselves. “The Mills community often provides students and employees the first place they could go about their education or occupation without having to explain their right to exist and be valued,” Martin says.

“My friends all agreed [with the policy]. It was a very ‘duh’ moment in our world, and it was a powerful reaffirmation of our identity as a women’s college,” says Tess Fillbeck-Bates Smith ’15, a cisgender woman. An athlete and musician while at Mills, she says she thinks the policy was an important step for women’s colleges. As one of the panelists on that 2014 episode of Forum with Michael Krasny, she said that she supported the policy and felt that her education would be enriched. “Because when we have people who can feel free to express who they are, they can be stronger in everything they do,” she said then. But Smith now also recognizes that not all students were supportive: “There was a small group of students who did not agree. They had real lived experiences and reasons, and it was tough for them,” she says.

Some of the trans/nonbinary students at Mills, recent grads, and older alums have told Stryker that they feel there’s still a lot of “transphobia, prejudice, ignorance, and passive-aggressiveness” regarding non-cisgender women being in the undergrad programs. However, she also hears from other trans and nonbinary students that they felt affirmed in their identities. “There’s a lot of variation in experiences,” Stryker says.

In the years since the policy was enacted, the recorded numbers of students who self-identify as transgender slowly rose to a high of nine in the 2020-21 school year, before dropping down to five in the academic year that just ended. Stiglitz says that the policy was very much about admissions and “ways to attract more students,” though a large influx of trans students didn’t happen. That might be down to how it’s worded: “The policy is confusing and vague in the way it was written,” explains Bailey. “Transness is such a nuanced and diverse identity. Really, no two trans people are alike, so it’s hard to write a policy that’s inclusive of all that.”