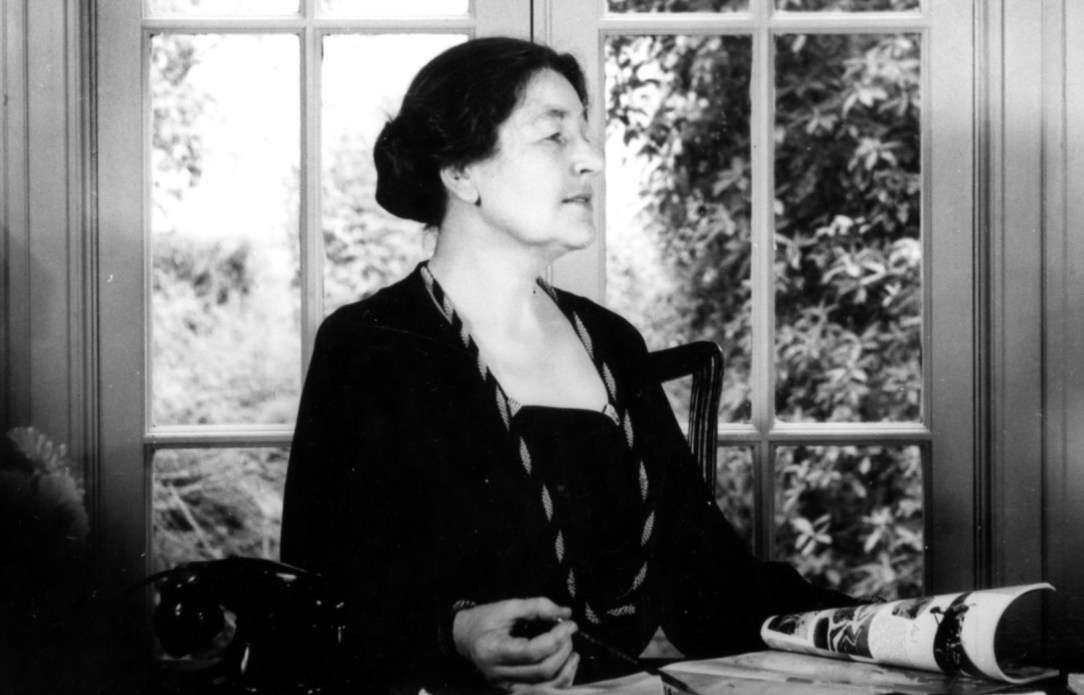 A recounting of the Aurelia Henry Reinhardt era at Mills, which saw the first men admitted as graduate students.

As Mills currently faces a major change, the Quarterly takes a look at some of the other transitions the College has experienced over the course of its esteemed 170-year history. This is the second story in a series of three.

In the spring of 1916, a tall, commanding woman—with upswept dark hair and two young sons in tow—arrived on campus. Aurelia Henry Reinhardt was ready to take her place as the sixth president of Mills College. Although some trustees feared her lack of experience, it soon became clear that Reinhardt possessed an unrelenting force that would guide Mills through a series of transitions and lift the College to admirable heights.

When the 39-year-old widow accepted Mills’ offer, according to the 1961 biography Aurelia Henry Reinhardt: Portrait of a Whole Woman by George Hedley (who served as College chaplain and professor of economics from 1940 to 1965), she called a good friend of hers: “My dear,” she said, “it will interest you to learn that I have accepted the presidency of Mills College; which is, as you know, a moribund institution.”

Indeed, the College was not thriving. It had been four years since Mills had shifted from a seminary to a college, but after a period of increased enrollment, numbers were declining. Rosalind Keep said in a 1931 article for the Pacific Coast Review, “Mills College–The Pioneer Woman’s College of the West,” that the 1916 trustees “felt that a new leader, free from associations with the old regime, was needed to meet the administrative, educational, and financial challenges of a new era.” Although Seminary cofounder Susan Mills died in 1912, her old-fashioned style lingered, like another ghost haunting the corridors of Mills Hall. Students complained that they were being treated as “school girls” and not the “college women” that they were.

Reinhardt got right to work, meeting with students and addressing their complaints. A member of the Class of 1917 said: “Naturally she didn’t approve of all our requests for more power and more freedom, but she was understanding and showed a sincere interest in what we were thinking, and we adored her.” Just before her arrival, the trustees and faculty had approved the founding of the Associated Students of Mills College (ASMC), an organization that still exists today to give students a voice on campus issues. Reinhardt herself was in full support of the ASMC.

In her first year, enrollment jumped from 153 students to 212, and by 1920 it was up to 432. With the exception of several years during the Great Depression, the student population continued to grow under her reign. “What was the secret? There were many,” Hedley wrote. “Among them a vital curriculum, a strong faculty, attractive buildings, [and] adequate equipment.” Additionally, Reinhardt, with a PhD from Yale and years of publicspeaking experience, traveled extensively all around the country and abroad, meeting young women over cups of tea and spreading the good news of Mills.

The increase in enrollment was welcomed, but it also created an urgent problem—space. Although there was plenty of room on campus, there were only 11 buildings, and they were bursting with students, faculty, and necessary “academic equipment” such as musical instruments. Upon arrival, Reinhardt set her sights on the first of several residential halls. Olney Hall was completed in 1917, and two more followed. Even so, while Ethel Moore Hall was under construction in the 1920-21 academic year, the College rented out all the rooms of a local hotel to house 60 of its students.

Funds were always an issue, and as buildings went up, a series of capital campaigns began. In a 1920 College fundraising pamphlet, Reinhardt made her argument: “Unless Mills can get sufficient funds to meet successfully the imperative demands made by the new set of conditions, she must not only stop growing, but must begin immediately a process of retrenchment, which means stagnation and failure.”

On August 26, 1920, the Mills College Weekly ran a bombshell headline: “Graduate School Now at Mills.” The front page article explained that, for the first time, the College was offering advanced study for master of arts degrees, as well as teacher’s certificates. (Speaking of space concerns, Toyon Lodge was soon constructed to house graduate students.) “This addition to our academic development is a most significant one,” the article stated. “And one that goes very far toward providing the recognition of the growing value of Mills, and it is a tremendous satisfaction to any one connected with the institution in any way.”

Just after World War I, California urgently needed teachers. Mills responded, developing a School of Education that provided a five-year course leading to a master of arts degree or a state teaching certificate. (Reinhardt had enrolled eight students in the program before the trustees had officially approved it.) Hedley stated in his book that Katherine Simon, Class of 1920, received the first graduate degree a year later, with 50 earning the MA within 10 years.

Bryn Mawr was the first women’s college to offer graduate-level education, with a PhD in social work available for enrollment starting in 1912. That program was opened to men in 1931. Although the graduate programs at Mills were not limited to just women, the first men didn’t show up until 1935; according to Hedley, Howard Cooper received the first MA granted to a Mills man in 1936, followed by the second male grad two years later. What might have been something controversial turned out to be a non-issue, at least according to archived documents. There was no discussion about it in the trustee meetings, nor in any of the student publications. Perhaps men weren’t noticed in those early days because they were slow to arrive, small in numbers, and didn’t live on campus. But offering graduate degrees did further raise the College’s profile of Mills, and would eventually attract renowned faculty and even more students. Once the men were noticed by the 1940s, there were some unhappy rumblings, but they didn’t last. In a 2001 interview with the Quarterly, the late composer Pete Rugolo, MA ’41, commented on his campus experience: “To me it was great. At first the other students were so upset. But later on they got to know me and it was fine.”

The music school was a draw for men in the 1940s most certainly because of composer Darius Milhaud, who left Nazi-occupied France during World War II and arrived on campus at Reinhardt’s invitation. Professor Emeritus Bert Gordon credits Milhaud and others with making a big impact: “Mills attracted, for a small college, a reasonable number of artists and intellectuals, who were fleeing Nazi Europe. It really was the heyday of the arts programs at Mills because of these people,” he said in an interview. Later, the College purchased the Ming Quong Home (renamed Alderwood Hall and now hosting the Julia Morgan School for Girls) for graduate housing after Toyon Lodge was repurposed.

In addition to bringing in international faculty, the College was keen to recruit students from a variety of backgrounds. In her 1945 autobiography, Fifth Chinese Daughter, Jade Snow Wong (aka Connie Wong Ong ’42) describes how, after completing her associate’s degree at City College of San Francisco, she met with Reinhardt, who arranged a scholarship and campus job for Wong: “Dr. Reinhardt refused to believe that money could be a final obstacle,” she wrote.

Wong, who later became an accomplished ceramicist, was at first hesitant to go to Mills because of her perception of this “fashionable private women’s college” being out of her reach, but she said she never regretted her decision. At Mills, Wong studied economics and lived on campus where she met other Asian students, including Sun Yat-sen, the granddaughter of the founder of the Republic of China, and a young woman with ties to the Japanese royal family. (Of course, Wong was also on campus at the same time as several Japanese American students, who were later imprisoned in internment camps during World War II.)

Other students of color arrived a few years later. Frances Dunham Catlett, MA ’47, said in her 2003 oral history (from the Oakland Living History Program and the senior thesis of Angelle Pryor ’03) that she didn’t remember any other Black students on campus. In fact, Catlett, at the time a young mother of two children, was the first Black student to earn a graduate degree from Mills. “I had been at [the University of Chicago]. I had been at Boston University, so I had no particular feelings about being a Black person at Mills,” she said, noting her previous experiences at predominantly white institutions. Catlett went on to earn another graduate degree from the University of California in social work, and many years later, she became a celebrated painter. She called Mills a “garden of Eden” and she said, after having experienced the loss of her second husband, “I just felt that Mills was a beautiful place, and it was calming on me.”

“If you want to point to any one individual who made Mills what it became, that would be Aurelia Reinhardt,” says Gordon, who taught a class on Mills history during his tenure. By the time of Reinhardt’s retirement in 1943, Mills was unrecognizable from when she first stepped on campus. The College blossomed in the 27 years under her reign: Enrollment increased, the campus expanded from 11 buildings to 28 (including the Art Museum and the Music Building), and the community became more cosmopolitan, welcoming students and faculty from around the world. Because of the times (two world wars, the Great Depression) and Reinhardt’s vision, the College was in a constant state of transition. Sometimes taking little steps, more often making big leaps, but always with an eye on what was happening in the world outside our campus.

In addition to the sources mentioned, Fourscore and Ten Years: A History of Mills College by Rosalind Keep provided information for this piece. Thank you to Janice Braun, director of F.W. Library and special collections curator; Rebecca Leung, archives and manuscript librarian; the library staff; Professor Bert Gordon; and the Oakland History Center.