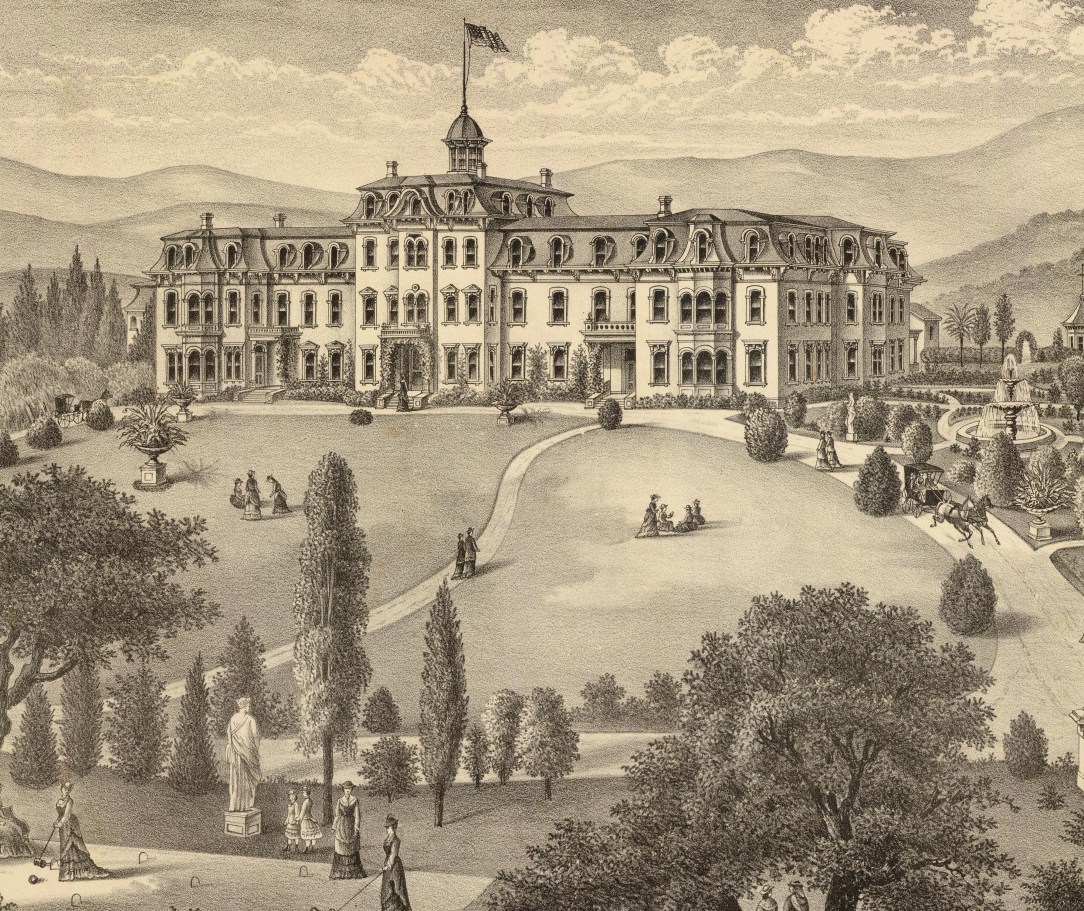 Transitions: From Benicia to Oakland, From Seminary to College

In the first in a series of three stories, we look at Mills’ origins and the changes that helped make it what it is today.

As Mills College currently faces a major change, the Quarterly takes a look at some of the other transitions the College has experienced over the course of its esteemed 170-year history. This is the first story in a series of three.

On a summer day in 1865, Cyrus Mills and his wife, Susan, fresh from missionary work abroad, traveled to San Francisco with the intent of buying a school. With state universities still just beginning, private academies and seminaries were popping up all over California. These institutions were often founded by evangelical groups and modeled after well-established schools on the East Coast, offering basic education as well as music and art.

When Cyrus and Susan arrived, they were presented with a possible sale by Mary Atkins, whom they had met the year before while she was passing through Hawaii on her way to China. Atkins was the first individual head of the Young Ladies’ Seminary, founded by Protestant men in 1852 and located in Benicia, the Solano County town that served as the capital of California from 1853–1854. From its earliest days, the Seminary attracted an array of young women from the Mother Lode region in the Sierra foothills as well as Sacramento, Stockton, and San Francisco. Enrollment ebbed and flowed, rising to as many as 149, all housed in one building. Students took “preparatory” classes such as geography, US history, and English composition. In her 1946 book Fourscore and Ten Years: A History of Mills College, Rosalind Keep wrote: “The seminary curriculum was a forerunner of today’s junior college requirements.”

Eager to sell, Atkins anxiously courted the Mills couple, who bought Young Ladies’ Seminary for $5,000 and took it over at the start of 1866, thus beginning their lofty plans for something much bigger than a seminary. Such plans necessitated a larger site, and Cyrus almost immediately began looking across the Carquinez Strait into Contra Costa County and beyond. The couple first purchased seven and a half acres near what later became Lake Merritt, but quickly determined it was too close to the “village of Oakland,” according to Elias Olan James in his 1953 book, The Story of Cyrus and Susan Mills.

Cyrus wanted space, and a 25-acre tract with two streams running through it along the old San Leandro Road kept drawing the couple’s attention. Groundbreaking took place in June 1870, and at graduation in Benicia the next year, he announced the next school year would begin two months later at the new site 30 miles south.

It was a warm day in late July 1871 when students from the Young Ladies Seminary, along with teachers and staff, took the arduous journey by two trains from Benicia to Oakland. Once at the Seminary Park Railroad Station (near the modern-day neighborhood of Melrose), some students rode in carriages, but others walked under the blazing sun, their long skirts dragging along dusty roads as they took in a vast open landscape, not the crowded city of today. After a long three miles, the caravan crossed over the entrance bridge onto the brand-new campus, and the young women let out a “ladylike” cheer when they first glimpsed their new home. Dubbed an “imposing structure” by the local press, the state-of-the art building could accommodate 200 students and offered high ceilings, wide stairways, and sunny rooms—which included gas and sinks with running water! At the time this impressive construction, eventually to be named Mills Hall, was considered the “finest for school purposes this side of the Rocky Mountains.”

Addie Justina Mason, Class of 1876, recounted their arrival in her Mills remembrances: “I can still smell the tar weed of the surrounding fields and hillsides. That lovely sunny day of the opening of Mills Seminary, we all came chattering in through the middle front door. Mrs. Mills came out to greet us, though she was a very busy woman, for many mothers accompanied their offspring and […] beds and meals had to be prepared for them.”

The move from Benicia to what was then called Seminary Park, Brooklyn (five miles from Oakland), was a major transition. Students, teachers, and staff were going from a house-turned-school in a bustling village to a spacious mansion, topped with a bright blue cupola, in the middle of nowhere. Perhaps there were a few reservations; Seminary student (and future Mills College President) Luella Clay Carson said of the move, “There is always something to regret when leaving the old.”

Any regrets soon faded when the excitement of new opportunities set in. Lizzie Trask Miller from the Class of 1873 later wrote: “Can you realize what the change in location meant to us? What it meant for us to be where we could walk about at will, instead of promenading the village streets in stately columns, two by two? To be transported from the limits of the circumscribed town to God’s great, beautiful out-of-doors, to the freedom and joy of the hills?”

Space was what Cyrus and Susan desired for their students. They envisioned a campus full of trees with plenty of opportunity for outdoor exercise and exploration—a campus as a “remote retreat” with few distractions.

The move was complete, the students were settling into their spacious rooms, and Cyrus Mills was looking ahead. It was always the couple’s goal to transition from a two-year seminary to a four-year college for women—one that would thrive long into the future. In the 1872 Seminary catalog, Cyrus wrote, “Few of our female seminaries, however excellent, have any principle of perpetual life, but change with the proprietors, or die with the founders.”

Although to the students Cyrus may have seemed old and aloof, he was in fact a savvy businessman. Cyrus understood that the future College was going to need support in the form of an endowment. To that end, in 1877 the school was incorporated as Mills Seminary-College, and the Millses deeded to the College trustees some of their accumulated land and all of the campus buildings, which at the time numbered around a half dozen. The Seminary was no longer their private property, but they were still running it, with Cyrus as president.

Susan saw to the daily operations and Cyrus continued to secure the finances, which included buying land all around the campus. However, in 1884, he unexpectedly died from complications after surgery. Just one year later, Mills Seminary-College reincorporated under the name Mills College with Homer Sprague as president. Another building, College Hall, was constructed on the meadow (where NSB is now) to house students.

(Oddly enough, Cyrus never intended to name the College after himself; he preferred “Alderwood,” the name of the building where the Julia Morgan School for Girls now resides. But one blueprint that still carried the Mills name was shown to a newspaper reporter, and the rest is history.)

The first-year curriculum for the College, influenced by men’s universities on the East Coast, included Latin and Greek authors, hygiene, mathematics, Roman and Greek history, and Shakespeare. Bible study and speech were required all four years. Most importantly, young women had the opportunity to earn a bachelor’s degree.

“At first we were much excited over the fact that we were a college. Women’s colleges were not then a fact so well accepted as now. Then the hall was built. I believe only five girls moved over and thus disappeared from our daily thoughts,” Mason later wrote.

Those five students formed the Class of 1889, which was not enough to keep the College going as enrollment struggled. However, two-year seminary enrollment remained strong, bringing in much-needed money. “Mills had for nearly half a century left its mark on the community as Mills Seminary. The public was slow to recognize its collegiate organization,” Keep wrote.

So, the Seminary and the College coexisted for a time.

Susan Mills, president since 1890, was fully behind the College, but she was happy to keep the Seminary going. The money, of course, was strong motivation, but having taught the lower grades for most of her career, she felt an obligation to younger students. “More and still more friends wanted their daughters to be with Mrs. Mills… and how could she refuse?” James wrote. But the trustees and faculty felt that the Seminary was holding the College back. Finally, the trustees voted to “eliminate all preparatory work.”

“It was the adoption of this clear-cut policy that marks the successful initiation of the [C]ollege,” Keep wrote. The last Seminary class graduated in 1912, and Susan died in December of that year at age 86 (after retiring in 1909). Fifty-six women were admitted the next semester, and the College saw a steady increase in enrollment the following years.

One long transition from Young Ladies Seminary to Mills College, and the Cyrus and Susan Mills era, had come to an end. But there were more transitions ahead.

In addition to the sources mentioned above, Celebrating the Cultural Landscape Heritage of Mills College (2008) by Vonn Marie May and Robert Sabbatini with Karen Fiene provided information for this piece. Thank you to Archives and Manuscript Librarian Rebecca Leung and Senior Director of Facilities, Compliance, and Sustainability Karen Fiene.