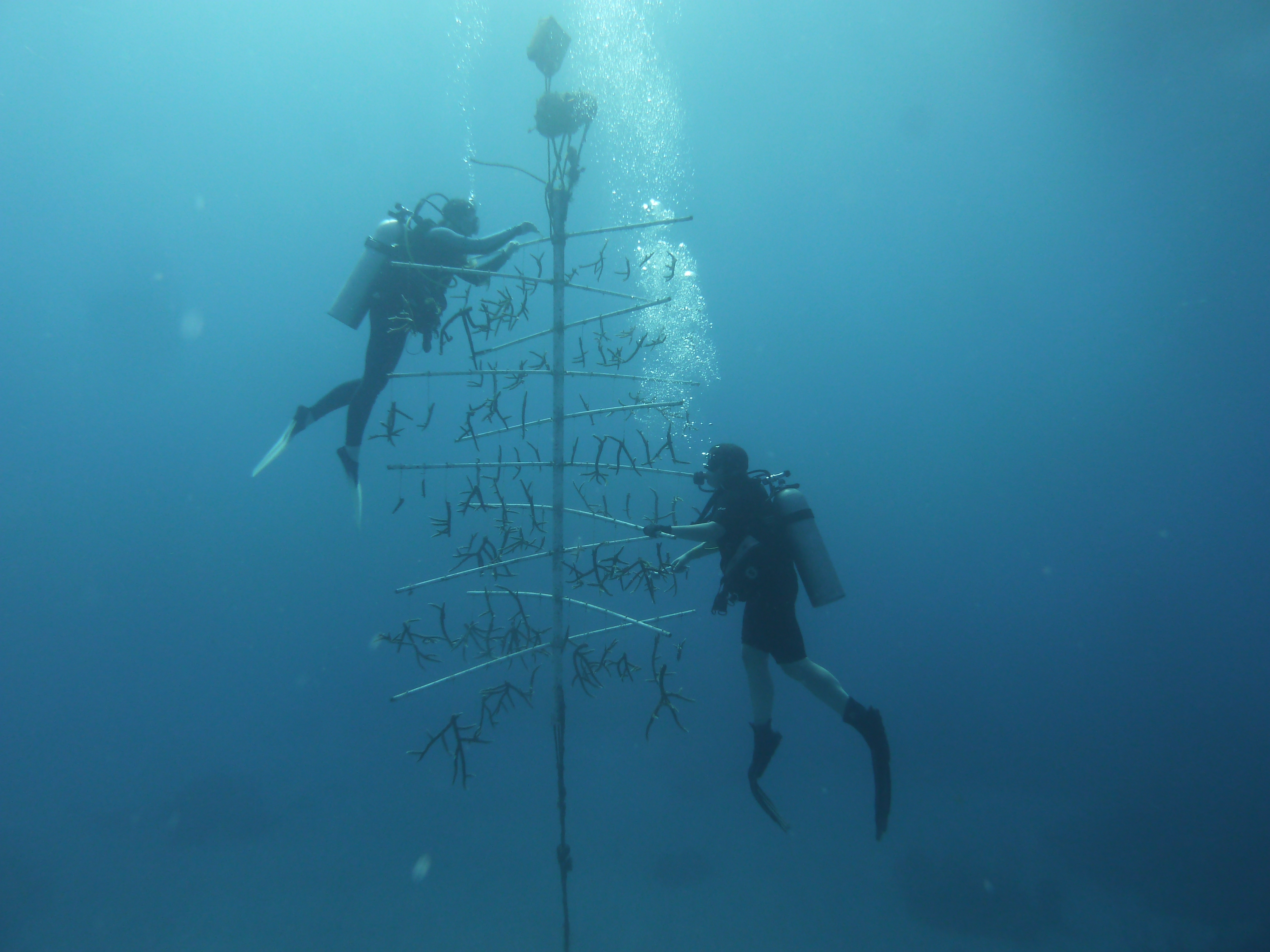 In a cloud forest on the western slope of the Andes, in the Mindo Valley of Ecuador, 11 Mills students planted wild avocado seedlings. Taken from an area so thick with young plants that few could survive, these small trees were being moved to a restoration area, once deforested for agriculture. “The soil here is so nutrient-rich, it’s easier for new plants to grow and to bring back what was lost. The birds are coming back, the insects are coming back to this ecosystem,” says Alora Stickley, a sophomore biology major.

More than twelve hundred miles away, in Central America, Mills students in scuba gear were 40 feet underwater, carefully scrubbing algae off supports in an undersea garden of threatened elkhorn and staghorn coral fragments. If allowed to grow, the algae blocks sunlight needed for the pieces of coral to develop. “Part of the reason that coral are dying out is because the fish that eat the algae are being overfished,” says Jamie Ziolkowski, a junior majoring in sociology. When the coral fragments grow large enough, they too will be transplanted. The most disease- and heat-resistant specimens will go to zones where coral reefs protect shores from incoming swells.

These students were investigating biodiversity first-hand, working to restore reefs and cloud forest, and learning about ways ecotourism is used to protect threatened flora and fauna as they participated in two “alternative spring break” projects offered in the middle of the spring 2018 term. The courses moved at an intense pace.

The cleaners in the coral garden were led by Helen Walter, visiting assistant professor of biology. Before they left on the 8-day trip, these students studied not only the biology, but also the culture and history of their destination. They learned about the roughly 70 marine species they might see in the waters off Roatan, Honduras. Each student researched the life and work of a marine biologist, and they prepared short presentations about some aspect of life in Honduras—from whose portraits appear on the currency to what foods are traditionally eaten on holidays. They designed research projects: One group planned to monitor endangered sea turtles, another focused on reef biodiversity, and a third looked at ocean acidification and the accumulation of microplastics. Their plans were ambitious, says Walter. “I had to guide the students about what was realistic to do in a week.”

They also became certified scuba divers, a process that started in the deep end of the Mills pool. “When I arrived at Mills,” Walter says, “I was surprised to find that we have a beautiful pool that’s perfect for initial scuba practice—but nobody was using it for that purpose.”

Walter herself has been a certified scuba diver since 1985, and is adamant about teaching the skill to more women—who are underrepresented in marine biology, as in most scientific fields. Scuba training is useful for anyone interested in ocean sciences, she says, and it also “helps you conquer fears, makes you aware of your environment, teaches you communication, and improves your observational skills.”

The training continued in the dark chilly waters of Shadow Cliffs quarry in Livermore. “It was brutal,” says Jamie Ziolkowski. By contrast, the temperate seas of Honduras were considerably less brutal. After arriving there, the students made several dives in areas rich with life, including endangered green sea turtles and critically endangered hawksbill sea turtles, which swam by gracefully–sometimes accompanied by remoras—or simply rested on the sandy ocean floor. Ziolkowski’s favorite observation was of a hawksbill sea turtle busily eating a sponge, reaching its hooked bill into the coral where the sponge was growing. “Which is really cool, because a sponge is hard,” she enthused. “The hawksbill sea turtles have that specific pointy bill for eating sponges. It was intently focused and didn’t care at all that we were around it.”

They also saw for themselves how plastic waste can affect turtles. “Plastic gets caught in the algae on the surface and that harms the young green sea turtles, who live in that floating algae.”

The class worked with the Roatan Institute of Marine Sciences (RIMS), which was established by a resort on St. Anthony’s Key, which housed the class during their stay. These two entities work together: RIMS uses research and education to preserve Roatan’s natural environment, while the resort caters to tourists drawn by the beauty of that environment.

Walter and RIMS enabled students to pack a lot into their short time. They attended lectures on turtles, reef ecology, endangered species, and coral restoration, and worked on their research projects. Then they were permitted to tend to the coral nursery. Coral restoration work is not something most tourists are able to do. The garden is protected from overuse, and a class is required in preparation for the work. “We were privileged to have that opportunity,” Walter says.

Such opportunities have made an indelible impression. Ziolkowski is considering getting certified as a Divemaster and working with a hawksbill turtle conservation project. First-year student Hayley Chamberlin, who found the exacting work in the undersea garden “actually very relaxing” says the trip reinforced her goal of becoming an environmental engineer and working with water filtration systems to help clean the ocean.

While Walter’s students plunged below the sea, the students in Assistant Professor of Biology Sarah Swope’s alternative spring break class (for upper division students) clambered through rainforest and cloud forest on the Andean slopes of Ecuador as they visited a series of reserves created by local communities to protect and restore the land.

“Ecuador is the most biologically diverse country in the world,” says Swope. “That makes it very interesting from an evolutionary standpoint, a biological standpoint, even from a geological standpoint.” Ecuador has national parks similar to US parks, but Swope also wanted her students to see how the community-based reserves represent a “very different approach to conservation.” The landowners, deeply dedicated to protecting the land, are also guides and stewards, and have a remarkably thorough knowledge of the wildlife, gained through experience rather than formal education. “Our guides were incredible. They could identify each of the 12 species of hummingbirds by sight,” says Amina Khribeche, a senior biology major. Students were particularly captivated by the involvement of children, from age 7 to the mid-20s, Swope says.

Swope’s itinerary included reserves ranging from as small as 160 hectares to as large as 6,000 hectares—the biggest reserve is effectively larger because it borders additional protected lands—which allowed students to consider the influence of reserve size on biodiversity. Small reserves are acceptable habitat for some species, but completely unlivable for others. (This is one reason backyard elephants are so rare.)

The students prepared by reading numerous journal articles about ecological concepts, including patch size, border effects, genetic diversity, and the influence of elevation on species variety, but nothing prepared them for the reality they experienced after a pre-dawn drive to the Rio Silanche reserve, 60 miles northwest of Quito. “The first bird we saw was the toucan,” says Khribeche. “You see it in a book, you see it as an emoji, but to actually see something like this from just 20 feet away, and to hear stories about how it has been coming back… I get kind of emotional just thinking about it.” In fact, they saw many toucans, with family groups squabbling and birds lumbering through the air, weighed down by their heavy beaks. “They’re just really cool. They’re so funny to watch fly,” Khribeche adds.

The Rio Cilantroa reserve, the smallest they visited, was a chance to witness first-hand the biological effects of patch size. “You can stand on the edge and see a whole wall of trees next to a deforested area converted to rangeland for cows. The reserve is small enough that we could walk the entire perimeter and see how the wildlife is boxed in to a very limited area,” explains Swope. “I asked my students to consider ‘What are you seeing here, and what are you not seeing?’”

Alora Stickley noticed how the edge creates a different environment than exists in the interior. Trees grow differently because they are exposed to so much more sunlight; animals may avoid the zone at the edge because it’s exposed. “So the space is functionally quite a bit smaller,” she says. The Maquipucuna reserve, the largest on the itinerary, is home to spectacled bears and big cats, though the class wasn’t lucky enough to see these elusive beasts.

It was in the cloud forest of the Milpe Reserve that students transplanted wild avocado trees and helped clear trails. The naturalist guides there showed them where the new little trees were found, how they were prepared for transplanting, and where they were needed to restore deforested land.

“There’s something absolutely thrilling about seeing things in real life,” says Swope. The impact of being an eyewitness to things you’ve studied is electrifying. Living creatures and complex places make ecological concepts intensely real. Field biologists today can’t separate the intellectual inquiry part of their work from conservation, the need to protect and restore the natural world. Fieldwork can spark ideas about how to do that.

Students in both spring break classes agree.. “You can learn about conservation or even individual specific species, but you only get so much from a book,” says Ziolkowski. “Seeing the sea turtles in their environment—and how plastic threatens them—is a whole different experience. It brings a level of reality and passion to the issue.”

“Lived experience is invaluable,” adds Khribeche. “This was a reminder that there is still hope if we take action now. If we work, if we are clever and resourceful, we can reverse the damage that we have caused as a species.”