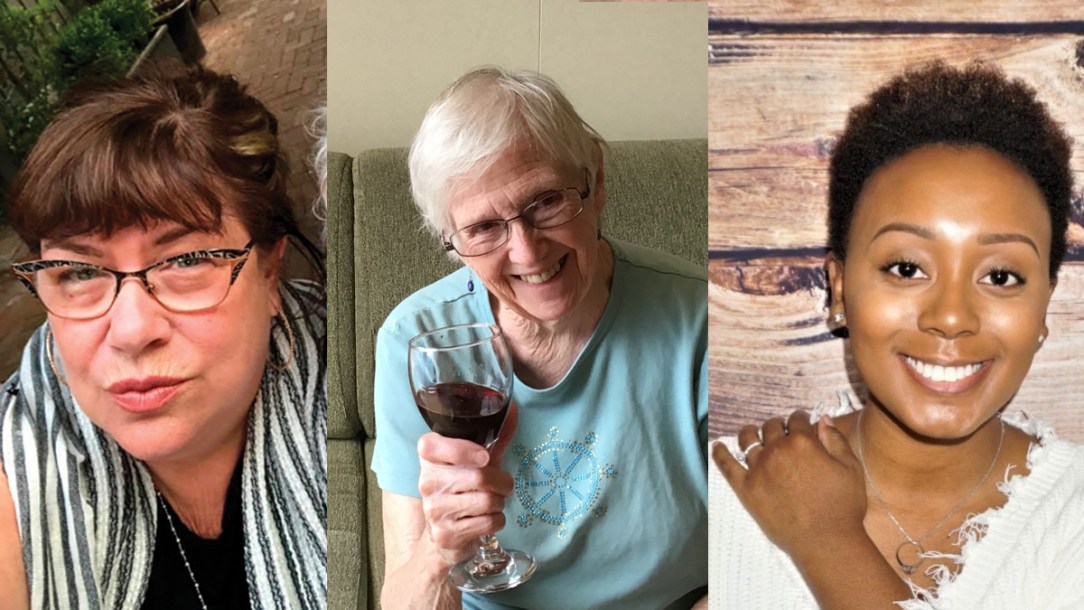 Every year since 2007, the AAMC has selected exemplary alumnae to receive its highest honors: The Distinguished Achievement Award for distinction in a professional field; the Recent Graduate Award; and the Outstanding Volunteer Award. This year, because of COVID-19 restrictions, we were unable to gather at Reunion to celebrate award recipients as we usually do. Instead, the AAMC is delighted to spotlight our awardees here. AAMC Communications Coordinator Kate Beckwith, MFA ’13, and Alumnae Awards Committee co-chair Kristen Oliver ’17, MPP ’18, convened the awardees via Zoom to reflect on their time at Mills, their life paths since graduating, and their hopes for the College.

Kirsten Saxton ’90, our Distinguished Achievement Award recipient, earned her PhD from UC Davis in 1997. An Oakland native, she returned to Mills as an assistant visiting professor of English in 1997 and climbed the ranks, reaching full professor status in 2012.

According to her nominator, Janet Boone MacEachern ’90, Kirsten embodies the best of Mills and has empowered generations of students. Her command of her field and commitment to student development have made her an outstanding professor as well as an empathetic mentor.

A cultural studies and feminist scholar, Kirsten specializes in 18th-century literature with a focus on gender in popular British narratives. Her scholarly research attends to authors and genres whose contributions to the literary landscape have been obscured or repressed. She has published three books—The Passionate Fictions of Eliza Haywood: Essays on Her Life and Work (2000), Narratives of Women and Murder in England, 1680-1760: Deadly Plots (2009), and Adapting the Eighteenth Century (2019)—and numerous articles and book chapters.

She is a lead faculty researcher on a five-year, multi-pronged humanities project at Mills funded by the Andrew W. Mellon Foundation. For this project, she co-taught a course in which students partnered with Oakland artists to collect and curate materials for a public digital archive of The Town’s past and present as an artistic hub.

In addition to her scholarly work, Kirsten has offered her expertise to the alumnae community by leading AAMC travel program tours and giving talks at regional Mills clubs. “I can think of few alums who are more deserving of this honor,” said Janet.

This year’s Outstanding Volunteer Award goes to Marge Thomas, MA ’67, who has been dedicated to furthering the mission of the AAMC and the College for decades. After graduating from Mills with her MA in English literature, Marge served as registrar for the College, as executive director of the AAMC, and as editor of the Mills Quarterly (then published by the AAMC).

Her AAMC positions were far more than simply jobs for her, and she went above and beyond her duties on a regular basis. For example, she often volunteered to host events at her home during Reunion, and throughout the year she took extra time to get to know not only alumnae, but also students—as they would one day join the ranks of Mills graduates. During the Strike of 1990, she leveraged her relationships to help both groups support each other.

For decades, Marge was known as the Mills historian, another role she played as a volunteer. She could tell you exactly what Susan and Cyrus Mills did in the “Sandwich Islands” and why it mattered to current students. During Orientation, Marge would dress up as Susan and tell stories of the College’s early days.

Marge’s volunteer work extends far beyond the Mills campus. As noted by her Bent Twig daughter nominators, Megan Thomas Barr ’93, MA ’98, and Katherine Thomas ’88, Marge is a fearless advocate for immigrants and homeless people and a supportive presence for anyone in need of comfort or care in her Sonoma community. We are honored to bestow the Outstanding Volunteer Award upon her.

Dorothy Lawrence-Akaeze ’11, this year’s Recent Graduate Award recipient, is an enthusiastic change leader and proud Oakland native. She earned her BA in psychology from Mills and obtained an MA in education, specializing in adult education and training, from the University of Phoenix in 2013. Since graduating from Mills, Dorothy has worked as an organizational development strategist.

In 2015, she joined the AAMC’s Alumnae of Color Committee (AOCC). She served as a governor of the AAMC from 2015 to 2018 and participated in the development of a new compact between the AAMC and the College, which laid the groundwork for the organizations’ current Memorandum of Collaboration and Agreement.

Nominator Myila Granberry ’05 said Dorothy exemplifies the Mills woman, and we couldn’t agree more. We are proud to honor her with the Recent Graduate Award and look forward to watching her career develop.

During our conversation, the three awardees each outlined their very different paths before, during, and after their times at Mills. The common thread between them, though, was that they were all drawn back into the Mills orbit after graduation.

Dorothy described her theory of the “purposeful accident”: a move guided by intuition rather than a clear vision. In an effort to build a bridge between Mills and students at an Oakland
middle school, she somewhat accidentally joined the AOCC in seeking out campus programs and alumnae groups interested in helping. This “purposeful accident” resulted in Dorothy mentoring more and more Mills students who had a similar desire to hers: to create transformative opportunities in their communities. Giving back to and connecting to these students has given Dorothy an increased sense of purpose as a Mills alumna.

Similarly, Kirsten never expected to find herself back at Mills in the position of professor, but she has embraced the role wholeheartedly. “Mills College’s values mean that you always have to be thinking about new ways to support the folks in the room,” she said. “Institutions of higher education weren’t necessarily built to support the marginalized communities that are central to the current student body, so their mere existence on campus is a radical act pushing the institution to learn, grow, and do better.”

It doesn’t always live up to the challenge. Dorothy noted the difficulty she had on campus as a Black student, especially when there weren’t many others around. This experience informs her work mentoring current Mills students, and she hopes that any future changes at Mills ensure that the needs of each student are prioritized, valued, and respected.

Marge recalled that, during her time at Mills in the ’60s, the student body was mainly white, and most of the women of color she got to know were international students. But the immense sense of support Mills fostered between women was undeniable and contrasted with her time later at UC Berkeley, which she called a “cold bath” lacking in support and opportunities for women to explore their full potential.

“Even during the Strike,” Marge said, “I’m not sure people understood exactly what Mills ought to be, what it needed to do to grow and change with the times.” Kirsten observed that
some of her faculty colleagues believe Mills would be better off now if it had gone coed 30 years ago, but she disagrees. “The past three decades have allowed Mills to become an institution that has an awareness of trans students and studies, for example, and one that increasingly empowers BIPOC students,” she said. For Kirsten, this evolution made rejecting the coed option worth it, allowing Mills to face the future with integrity.

Mills is an institution that welcomes people who come to make an impact. Students push, alumnae push, and the world pushes to shape Mills College into the very best version of itself it can be.