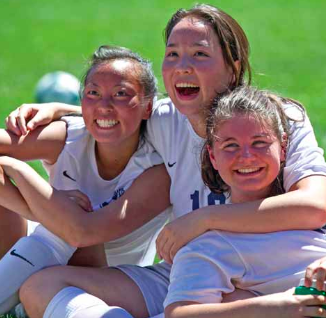 Participating in athletics helps students find a sense of belonging, increase their focus in the classroom, and develop skills that serve them well after graduation.

Strolling through campus, you may see students sporting a t-shirt that boldly declares “Mills College Football: Still Undefeated!” It’s a tongue-in-cheek proclamation, but athletics nonetheless is a vital part of the college experience for many Mills students. The confidence and camaraderie they find while wearing the blue and yellow results not only in a record of wins and losses, but also enhances their academic performance, builds emotional maturity and resilience, and develops an array of other skills that will help them well beyond graduation.

“This is very much aligned with our institutional values at Mills,” says Adachi. “The emphasis is on being a student first; it is about educating the whole person. Our student-athletes are leaders throughout the campus,” she adds, noting that many Mills student-athletes serve as resident advisors, student senators, class council members, admissions ambassadors, and editors or writers for The Campanil.

UC Santa Cruz is the only other Division III program in Northern California, so that over the course of the regular season, the Cyclones often match up against more competitive teams at Division II colleges or smaller programs under the National Association of Intercollegiate Athletics. End-of-the-season tournaments are played against other similarly skilled Division III teams in the Great South Athletic Conference (GSAC), which includes Agnes Scott College, Wesleyan, and several other all-women’s schools. The GSAC affiliation also gives Mills the potential to compete in the NCAA Division III National Championships.

“This conference championship lets us com-pete against other schools that share our philosophy,” says Head Tennis Coach Loke Davis ’09. “It’s a real goal to look forward to at the end of the semester.”

Maribell Garcia ’14, a four-year student-athlete and senior class president, traveled with the volleyball team to the GSAC championships in Winston-Salem, North Carolina, last November. “We were playing teams that are similar to our own skill level,” she says. “The competition was better; rallies lasted longer. It felt good to play with a little fight and to feel like we really earned our wins.”

That competitive edge also extends to making a solid showing in the classroom. When Katie Young ’12 was a member of the Mills swim team in 2011, the Cyclones recorded the highest grade point average (GPA) in the country among NCAA Division III women’s swimming programs. “That was something we were proud of,” Young recalls. “There was positive peer pressure to keep our grades up.”

Such success is due, in part, to the efforts of Head Swim Coach Neil Virtue, who meets with each student regularly to check on her progress in the pool and in the classroom. If a student is struggling, he helps her develop an academic plan. During Virtue’s 12-year tenure at Mills, the swim team has been recognized every semester by the College Swim Coaches Association of America for earning a 3.30 GPA or higher.

Young had opted out of swimming during her first year at Mills. An environmental studies major with a music minor, she was concerned that she wouldn’t have time for music lessons, homework, and swim practice.

“I’m happy that I got over that,” she laughs. “Swimming actually increased my ability to do academics in the long run.” She rejoined swimming in her sophomore year, and explains that early morning practices meant getting homework done on time the night before. “I realized that I was more productive when playing a sport,” she says. “It adds structure to your life.”

The value placed on academics is not unique to the swim team. Student-athletes in all sports find support for their schoolwork even at the gym. When teams travel, coaches set aside mandatory study time. Coaches connect struggling students with academic resources, and follow up to make sure student-athletes are improving. Last year, varsity students earned a combined 3.28 GPA.

Volleyball player Maribell Garcia found that the team had regularly scheduled study sessions, sometimes even replacing on-the-court practice with study hall. “Playing sports has helped with time management,” adds Garcia, a first-generation college student. “When I am playing, I find myself procrastinating a lot less than I do during the off season.”

The stress relief of athletic participation also contributes to mental focus, says Ledah Casburn ’03, a swimmer who double majored in math and computer science. Casburn saw her time at the pool as a chance to burn off energy and refocus on school. “It was meditative,” she says. “We had to get up early and get in the pool. It gave me an awesome calm.”

The emphasis is on being a student first; it is about educating the whole person.

For many student-athletes, joining a varsity team is about much more than athletic competition. Loke Davis, who played volleyball and tennis as a Mills student, says that being part of the athletics community made her transition to college easier.

“It was huge to come in and automatically have a group of sophomores, juniors, seniors, and staff who were committed to me because I was on the team,” Davis recalls. “Having that support system right off the bat really helped.”

Now serving as the tennis coach, Davis maintains a supportive environment for her student-athletes. “I was nervous to be on a college campus,” says junior Alice Hewitt, “but Loke was so calm and positive. She was a big factor in why I chose Mills.”

For Mara Harwood, a first-year biopsychology major from Washington, joining the swim team was a quick way for her to find a community. “I was really afraid that I wouldn’t be able to make friends at Mills, but I knew that by joining a sports team I would have a place where I could fit in right away,” she says. After practices, the team gathers in a hot tub at Trefethen Aquatic Center to relax and catch up. “Those are my favorite times—just hanging out after a really grueling practice.”

Volleyball player and swimmer Megan Miller ’05 points out how individuality was encouraged when she was a student-athlete. “Someone’s odd trait or unique characteristic was something that was championed,” she says, adding that the environment provided space for her to grow into herself. “I was able to figure out who I am,” Miller explains. “I was rewarded and encouraged to be me.”

Time spent together in practice, competition, and travel often leads to lifelong friendships, and this sense of closeness and support may well contribute to the high graduation rate of student-athletes. Social isolation is often cited as a major factor in students’ decision to leave school; a 2011 study by Stanford University’s School of Education found a 10 to 15 percent increase in retention rates among students who received mentoring and coaching.

At Mills, 83 percent of student-athletes in the entering class of 2009 persisted to graduation; they were retained at a rate several percentage points higher than their classmates. Nationwide, Division III athletics programs have an average graduation rate 7 percent above that of the general student body.

I knew that by joining a sports team I would have a place where I could fit in right away.

Participating in athletics at Mills also helps develop a sense of being part of the community beyond campus. With their unbounded energy and confident attitude, Mills student-athletes are a formidable force in community service.

“Our teams understand the importance and satisfaction of giving back,” Adachi says. Throughout the year, teams may take part in service days, fundraising events, charity drives, kids’ camps, and sports training clinics. The department is a five-time recipient of the National Association of Division III Athletic Administrators/Josten’s Community Service Awards.

In 2008, Mills student-athletes were recognized for the work they did to restore and refurbish Havenscourt Middle School in Oakland, where they painted the campus, organized and furnished the library, and started a garden. And every year, the swim team volunteers at the Swim-a-Mile fundraiser at the campus pool to benefit the Women’s Cancer Resource Center. They host swim clinics to help participants prepare for the mile-long swim and pitch in on the day of the event.

These activities establish a sense of belonging within the campus community and a habit of contributing for the greater good. Adachi notes that athletic pursuits provide an easy but effective environment for student-athletes to develop an array of life skills that can further personal and professional goals.

Tennis coach Davis attributes much of her own personal growth to her sports experience. “I learned how to manage interpersonal relationships,” Davis says. “When you’re on a team, you have to interact and cooperate with that same group of people every day, whether you’re getting along or not. That is a skill that is certainly useful in life beyond the experience of the team.”

Today, Davis emphasizes personal growth in all areas for her student-athletes. “The lessons we learn on the court are metaphors for how we can approach other things in our lives,” she says. “Tennis is all about confidence, and the confidence players develop on the court can translate to their pursuits in school and in their professional lives.”

Megan Miller says the leadership, problem solving, conflict resolution, and team-building skills she learned as a student-athlete are integral to her success both as a volleyball coach and in her career as a consultant. “I use all of those things on a daily basis,” Miller says.

Similarly, Katie Young uses the lessons she learned as a rower and swimmer in her job as a biologist. Her experience as a student-athlete prepared her for the physically challenging task of working in the field, she says, and her ability to maintain a positive attitude even under strenuous conditions has served her well in a variety of situations.

“We had some grumpy people at swim practice so early in the morning,” Young laughs. “I learned how much your attitude affects the group, and this made me commit to being a positive influence.

“And I learned to push myself to my limit,” she adds. “Sports puts you in uncomfortable positions, but that is how you grow and learn.”