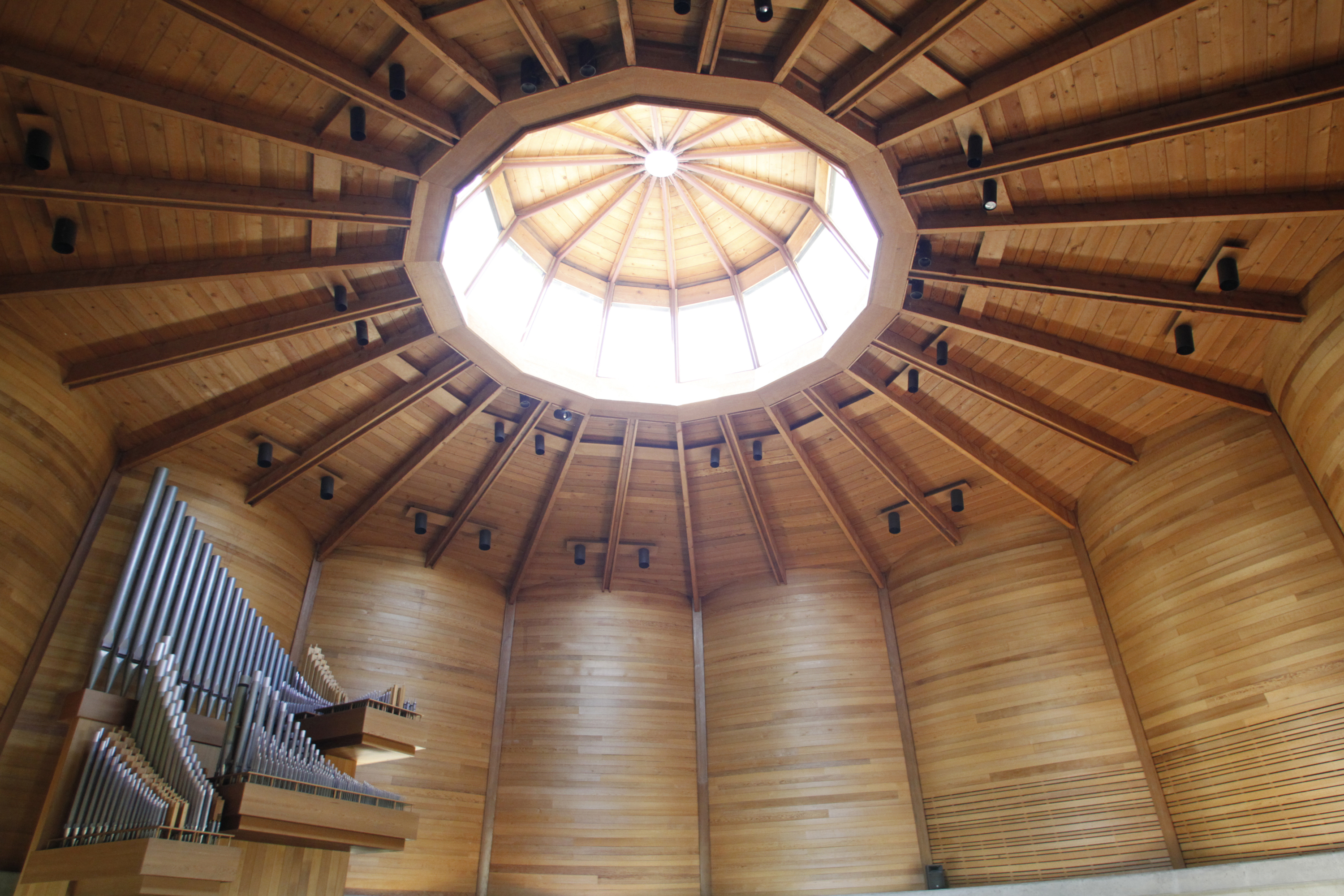 As the Chapel marks its 50th birthday, the campus chaplain reflects on the state
of faith at Mills today and the importance of cultivating interfaith awareness in order
to address today’s polarizing political and social issues.

In fall 1965, longtime Mills chaplain George Hedley bent with a shovel to “turn the earth” at the groundbreaking of the Mills College Chapel. Not unlike today, the country at that time was embroiled in passionate debates sparked by social movements advancing racial and economic justice, women’s rights, environmental protection, and the cessation of war. On the national stage, religious leaders were a powerful force in these efforts. Dr. Martin Luther King Jr.linked arms with Rabbi Abraham Joshua Heschel and other diverse religious leaders on the pivotal civil rights march from Selma to Montgomery, Alabama—an image that encapsulates interfaith cooperation aimed at a greater good.

Within this context, the Chapel’s founders aspired to create a physical site for open, pluralistic spiritual reflection and awareness. At the building’s dedication on June 11, 1967, the circular   sanctuary filled with the voices of the choir along with students, faculty, staff, and counselors to Jewish, Catholic, and Episcopal campus groups. Coming together to celebrate, these multitudes   began to fulfill the building’s promise to be a center for people from diverse religious and spiritual backgrounds—including those with no religious affiliation at all.

In 2017, the Chapel remains both a   sanctuary and a symbol: a place for rest and renewal, an opportunity to absorb beauty and music, a space to experience   solace, contemplation, celebration, and ceremony.

Today, the religious landscape at   Mills—and across our country—has   changed dramatically from what it was only decades ago. Increasingly, when presented with a survey on religious or spiritual identity, students prefer to check the box labeled “none of the above.” Yet nearly half of Mills students this year consider themselves “spiritual or religious,” and the campus hosts a   broad spectrum of student-led religious and spiritual groups: the Muslim Student Alliance, Jewish Student Collective, two Pagan groups, and Workers of Faith, a Christian-identified group focused on service and social justice.

Yet, religious identity doesn’t necessarily fit into neat categories. Students may or may not claim affiliation with any specific religion, but wide-ranging research offers evidence that the search   for purpose and meaning in life continues to be a primary concern of collegeage students here and elsewhere. At Mills, we offer a broad and inclusive definition of “spirituality” as “meaningmaking.” We encourage people to claim their own spiritual development and to   examine their various strands of identity   and how these connect to their life   experiences, values, ethics, and sense of self within community. We also aim to create opportunities to understand the diverse identities of others; this year at Mills we saw a reconstituted Interfaith   Alliance to foster dialog and understanding across religious boundaries.

And while many of today’s political and social conflicts are framed as religious struggles, supporting inter-religious dialog, dismantling assumptions and stereotypes, and cultivating interfaith literacy remain critically important.

Eboo Patel, founder of Interfaith Youth Core and a member of former President Barack Obama’s Advisory Council on Faith-Based Neighborhood Partnerships, suggests: “The question of how people orient around religion differently, or interact with one another, whether that be based on conflict or cooperation, will be one of the most engaging questions of the 21st century.” Patel identifies college campuses as uniquely situated to be labs of learning in which students practice   engaging one another across lines of differences and can work together in mutual support and common cause.

Such questions and challenges have been deeply apparent at Mills this year. The heated rhetoric of the presidential race, the uptick in Islamophobic hate crimes, the ongoing Syrian refugee crisis, concerns about safety for undocumented families and individuals, and a wave of bomb threats at Jewish community centers across the country generated pain and anxiety for many.

Students were keenly interested in showing care for each other, but were uncertain about how best to do so. Interfaith Alliance offered a platform to help spiritual groups to reach out and   show support for each other, beginning with dialog on two key questions: “What can make crossing boundaries of religious and spiritual difference seem risky? What are some barriers to sharing with and learning from others in a multi-religious setting?” This conversation exposed both differences and similarities, but allowed connection and positive action. Over the course of the year, the Muslim Student Alliance (MSA) hosted a healing circle for Muslim students and a vigil honoring Syria. Students in the Workers of Faith offered to cook a meal for the MSA, and   members of the Jewish Student Collective crafted a statement of solidarity.

These instances of students figuring out how to demonstrate their compassion reaffirms that times of great challenge can also bring forward the best in people. These groups embraced the hard work that goes into building bridges of respect and creating a stronger, more resilient community. Not only can mutual relationships be healing in themselves but, practically speaking, such alliances provide a network that can be more successfully utilized to face   challenges from hate crimes to natural disasters. This is a core concept in community   organizing and holds true for interfaith organizing as well.

What students do in the microcosm of Mills is, in fact, a vital practice in making stronger, safer, and more supportive networks in the many communities they inhabit beyond campus. Navigating the messy terrain of asking uncomfortable questions, learning about one another’s worldviews, and exploring what solidarity looks like in practice is a necessary skill for citizens today. Developing honest, connected relationships that appreciate differences creates essential human linkages upon which any collective future is possible. ◆