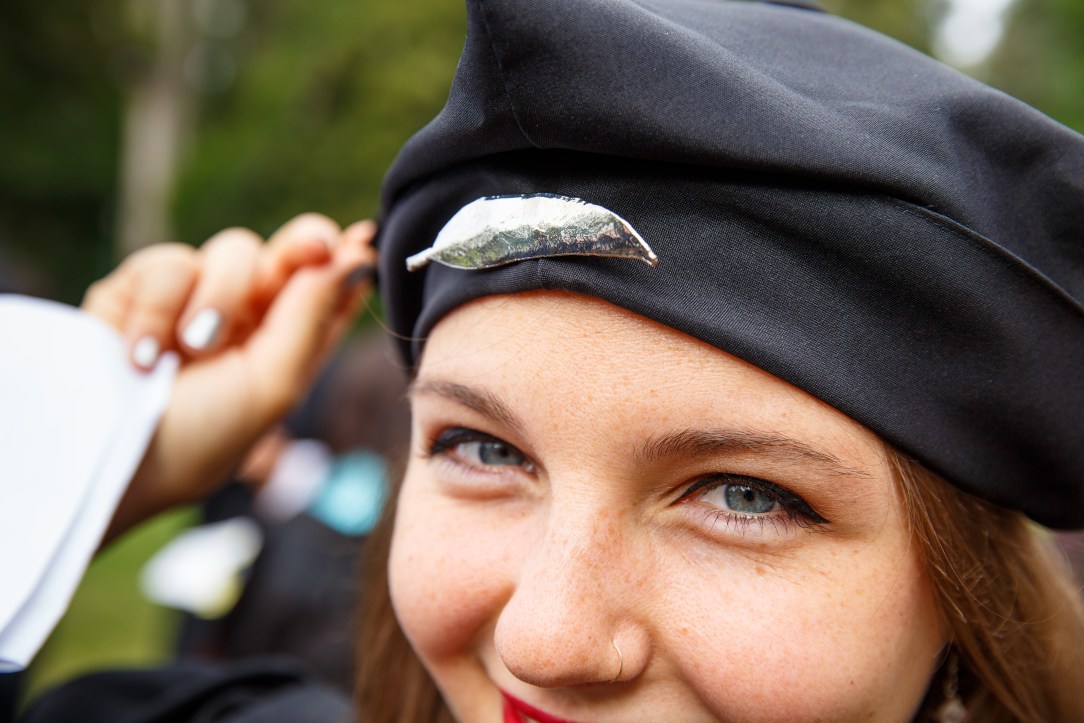 The lady, the leaves, the legacy

The eucalyptus pin has become an iconic symbol of Mills College. Here’s the story of the woman who first imagined it and made it come to be.

The late 1940s: Mills Hall was a student residence, populated with lively, bright young women earning an education at one of the most prestigious colleges on the West Coast. The living room was a hub of social activity. Kapiolani Road was lined with the eucalyptus trees that gave Mills College one of its most treasured visual symbols. And an indefatigable class of students was preparing to return to the wider world—a world still emerging from the aftermath of World War II.

One of those soon-to-be graduates was Nancy Butts. In those early days, before she became Nancy Whittemore ’48, the staunch East-Coaster alliteratively introduced herself as “Binkie Butts from Boston.” The first time she did so—at a freshman meet-and-greet—there was a long silence. Then a few giggles erupted. Soon the room was full of laughter, a warm acceptance into the fold. Nobody, of course, ever forgot her name.

Nor did they forget the tragedy that brought their class together. Later that year, the war claimed the life of Binkie’s youngest brother, bringing harsh reality home to everyone in Mills Hall.

“We were a wartime class, an amazing and very active class,” Binkie says. These classmates have remained close-knit over the years, despite having gone their separate ways. Binkie herself ultimately returned to New England. She attended business school at Harvard/Radcliffe, and later became an administrative assistant and mother of two; a busy go-getter and an energetic volunteer who found a calling assisting the Red Cross and countless other organizations.

Before that, however, Binkie made a place for herself at Mills. She thrived in the intellectual and social environment, despite missing the “beautiful stone walls and open country” of her native New England. Though she is modest about her own student years, her longtime friend Michael May Lovgren Langner ’48 describes her as a divergent thinker with wonderful, imaginative ideas, who could sew like a pro and knit almost anything— even, sometimes, knitting at the movies.

“Being at Mills gave her a sense of freedom,” Michael says— freedom that sometimes resulted in mischief. As an undergraduate art major, Binkie’s creative streak occasionally landed her in the middle of outlandish, often hilarious schemes. One evening, for instance, a group of friends completely emptied the dorm room of a popular classmate, Betty Legge, while she was out on a date. When Betty returned, to her consternation, the only thing left in the room was a stripped bed!

The most memorable “incident” for the Class of 1948 involved a cow. At the time, the College president was Lynn Townsend White, a medieval historian who, Michael recalls, could wax lyrical about the humble horse stirrup. He was doing just that during a campus gathering for seniors at Lake Aliso as the sun went down and the students got restless.

While Dr. White was orating, Michael says, she and Binkie, along with Redi Elliot Leake and Mary Alice Garms Ramsden, decided to make their own adventure. “We went to get Mrs. Moo from a couple that lived up the hill from campus. When we returned with the cow, we entered singing.” The lyric? I Never Saw a Purple Cow, of course—most appropriate for the class whose color was purple. The prank would later be immortalized in the form of a souvenir gift for the class’s 35th Reunion: a sweatshirt silkscreened with 48 purple-and-white cows.

As their innovative class secretary, Binkie was the one responsible for the sweatshirts, and for numerous other Reunion gifts, including one of Binkie’s personal favorites: small silver wine tasters made using 1948 quarters. But the popularity of their 50th Reunion token would far surpass the gifts of previous years, and the gifts of years to come.

That 50th reunion gift was the eucalyptus pin. Binkie had seen jewelry made from leaves on the East Coast, and the aesthetic appealed to her. She wasn’t the only one to love the idea—after the initial batch created for the Class of 1948, the class and the AAMC together have sold close to a thousand eucalyptus pins to students, alumnae, and faculty.

Professor of Economics Nancy Thornborrow, who purchases pins every year for her graduating seniors, hopes the pins will serve as reminders to her students of all the Mills women who have come before and those who will come after them. President Alecia DeCoudreaux has bought several, even gifting one to former Secretary of State Madeleine Albright, who has used her collection of pins to convey subtle diplomatic messages throughout her career.

For Mills women, however, the meaning of the eucalyptus pin is clear. “The pins have promoted a oneness, a belonging, a pride,” says Michael. “They represent our shared experience.” The pins themselves are unique, too—striking and beautiful, and eminently recognizable as a symbol of the College. (Celia Wetzel Taylor ’48 was once complimented on hers by a complete stranger in an elevator!) The story of their creation is just as remarkable.

In 1998, Binkie—working long-distance from her home in Connecticut—consulted with Michael and arranged for the collection of over a hundred eucalyptus leaves from the Mills campus and other nearby locations. Michael became an expert leaf scrounger, sending the best specimens to Binkie, who would sort and trim the leaves, then iron them flat on a wet paper towel, her entire house redolent of eucalyptus.

The leaves were then sent to a jeweler, strengthened with copper, and dipped in either silver or gold. That first year they produced 100, each one unique, mounted on a card and sold within the class for $10. But their popularity soon blossomed. Now, the pins are a token of Mills that, like the Pearl M, is familiar to anyone in the extended Mills College family.

Michael credits Binkie’s ingenuity for the success of the eucalyptus-leaf pin. “It happened because she has wonderful imagination and creativity, and she sees things through,” she says.

Now in her late 80s, Binkie lives in Sandy Hook, Connecticut, just a half mile from the site of the school shooting last year in Newtown. Her volunteer activities, says classmate Marilyn Newland ’48, directly involved her with the recovery effort, sorting donated items for the community where her own grandchildren live (although they attend a different school).

Binkie still plays a vital role in the production of the eucalyptus pins. She even uses the same jeweler after all these years—despite the fact that they’ve never met in person.

“We’re getting to be great buddies over the computer,” Binkie says, with dry humor.

Her sense of humor may be one of the qualities her peers remember most clearly, but it’s her determination—along with her dedication to her classmates and to Mills—that made the eucalyptus pins a reality.

It’s also a reflection of the entire Class of 1948, a wartime class who supported one another through hardships and happier times. The eucalyptus leaf pin is a perfect symbol for their class—and for everything that makes Mills alumnae shine and persevere.