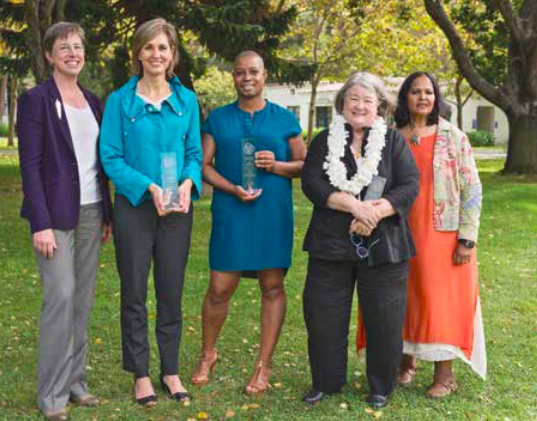 Each Reunion, the AAMC honors three graduates who are making a difference in the Mills community and the world.

Myila Granberry ’05 has been part of the Mills community since childhood, having attended many alumnae events with her mother, Toni McElroy ’83, MA ’05, EdD ’13. So it’s no surprise that she involved herself in leadership with the AAMC. In 2015, she joined the Alumnae of Color Committee (AoCC), of which she became co-chair this fall. An active volunteer, Myila has organized several annual AoCC events, such as the fundraising concert for the Alumnae of Color Endowed Scholarship and the annual Phenomenal Women of Color Award Ceremony. Myila has also engaged a third generation of her family in supporting Mills: her son, Ahmed, often takes photographs at AoCC events.

Myila earned her MA in special education at Holy Names University. She currently works in Oakland as an academic intervention specialist at the Seneca Center, an advocacy center for kids in group and foster homes. Myila’s dedication and contributions to both the Bay Area and College communities exemplify the true spirit of a Mills volunteer.

Melissa Stevenson Diaz ’91 started her long history of volunteering for Mills while a student, as president of the Associated Students of Mills College (ASMC) and as a leader of the successful student strike of 1990. This experience helped propel Melissa into a life of public service.

After Mills, Melissa began a fruitful career in city administration, earning her master’s in public administration from San Jose State University in 1996. She has worked for a number of South Bay cities, culminating in her position as city manager of Redwood City in 2015.

All the while, Melissa continued to volunteer with the AAMC in many roles. She served on the Board of Governors from 1995-2005 and as an alumna trustee in 2013-2016. In that role, Melissa also served on the College’s Board of Trustees and its Campus Planning Committee, where she applied her experience in municipal government to provide expert advice on plans to make better use of unoccupied campus land. Such a notable track record shows how Melissa makes a deep impact on each of her communities.

Claire Copenhagen Bainer ’74, MA ’75, found her passion in the traditional women’s world of early childhood education (ECE), but she has created new childcare models to better serve the needs of working women and families today. In 1983, her mother, Anne Sherwood Copenhagen ’44, founded the non-profit organization that would become known as BlueSkies for Children. In true Bent Twig fashion, Claire began teaching at BlueSkies in 1985 and became co-director upon Anne’s retirement in 1995. A childcare center that started with only 10 children, BlueSkies has grown to serve as many as 100 each year, from two months to five years of age. It remains the only nationally accredited childcare center in Oakland.

Claire understands that parents need smart, well-educated teachers to guide their children through their impressionable early years. So she has secured grants providing scholarships and funding stipends for graduate students studying ECE at Mills and beyond. Claire outlines the ideal ECE environment—a hybrid of a child development center and a loving home—in Second Home: A Day in the Life of a Model Early Childhood Program, written with her co-director, Liisa Karne Hale ’77. Their latest book, The Bridge to School, written with Gail Myers ’70, was published in 2018 on Routledge Press.

A model of excellence for the ECE community, BlueSkies’ impact is due in no small part to Claire’s commitment to blending the best information available on child development and psychology with true respect for the youngest members of society.