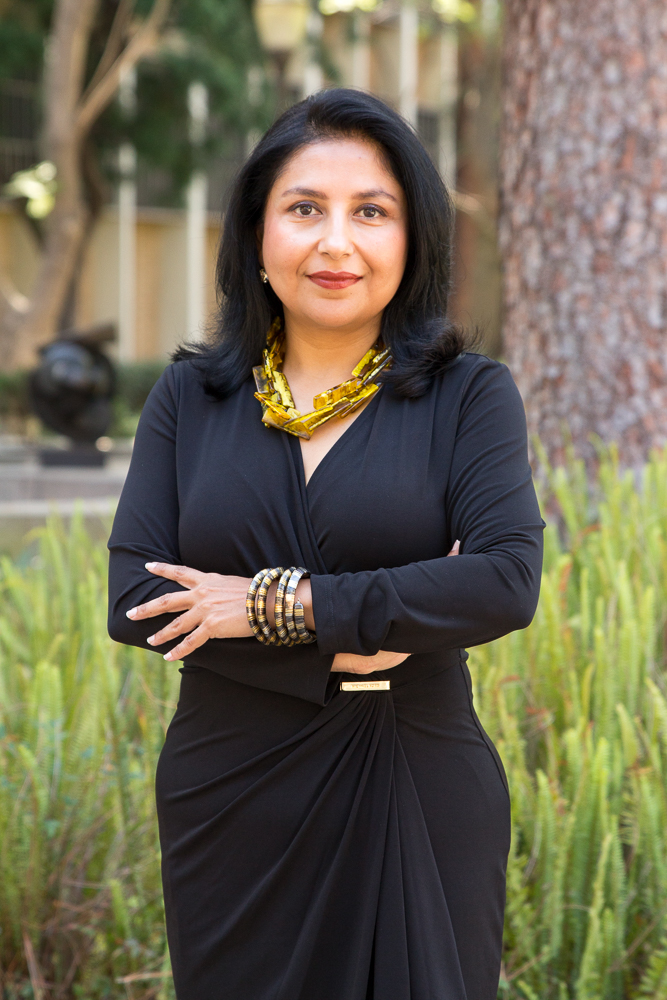 “What is the role of universities in social change?” asks Ananya Roy ’92. As a leading scholarly voice in the conversation about economic systems, race, class, and gender, she is proposing new answers to that question—and new tactics to achieve greater equity.

“I’m Ananya Roy, and I live in public housing,” declared Roy ’92, an acclaimed author and University of California professor, at the start of her TEDxBerkeley talk in 2013. “My career affords me a home in the rolling California hills with a view of the Golden Gate Bridge…. The home I live in is ‘public housing’ because the tax deduction my partner and I enjoy on our mortgage is a more substantial hand-out than any money spent by the US government on what has come to be stereotyped and vilified as public housing.”

Such provocative statements are not unusual from Roy, who has emerged as one of the leading academic voices in discussions of social justice, inequality and poverty, and international development. When Roy spoke the words above, she was professor of city and regional planning and distinguished chair of global poverty and practice at UC Berkeley. She taught an undergraduate course on global poverty that had become the largest social science class on campus, filling up with 700 students each year. She’d won multiple teaching awards, and her 2010 book, Poverty Capital: Microfinance and the Making of Development, received a prestigious national award for research that advances social justice.

She has been courted by Ivy League schools, but has remained committed to the mission of public universities— although earlier this year she was wooed away from Berkeley by UCLA. She is now the inaugural director of the Institute on Inequality and Democracy at the UCLA Luskin School of Public Affairs as well as professor of urban planning and social welfare. It’s a position that places her at the nexus of social justice scholarship and activism.

“I love my research and doing theoretical work,” says Roy. “But the question I return to over and over again is: What is the role of universities in social change? How can universities participate in producing new narratives around social justice?”

The questions Roy asks about social justice first began to take shape for her at Mills. She grew up in Calcutta, “in a middle-class household where encounters with poverty were present but limited,” she says. “I was keen to leave India because going to college there would have meant a lot of intellectual obedience. I was interested in thinking independently.”

She considered a number of women’s colleges in the United States, but chose Mills for its West Coast location. “It was in a part of the world where I didn’t know anybody at all, where I could be truly independent,” she recalls. “So I came to Mills on my own at the age of 18. It was an extraordinary experience.

“I credit my interest in urban issues to one amazing professor: Ted Thomas in the Sociology Department. He changed the ways in which I thought about the world and taught me how to be a social scientist. He encouraged me to reflect upon my relationship to the city where I grew up; and when I did, I found myself returning consistently to the issues of poverty and inequality.”

At Mills, Roy created her own major in comparative urban studies.

She went on to earn a master’s and a doctoral degree from the Department of City and Regional Planning at UC Berkeley. After she joined the department’s faculty in 1999, her first task was to set up a new undergraduate major in urban studies. She also pioneered a minor in global poverty that later became a model for similar curricula elsewhere in the UC system. “We convened students from across the disciplines—not just from the social sciences, but also from engineering, premed, physics, and environmental science,” she says. “We were training students who, regardless of what they were going to do, could think critically and responsibly about how to be global citizens.” She encouraged her students to “make change from within” their institutions—whether universities, corporations, or nations—and challenge dominant ideas about, for instance, development and poverty.

In fall 2009, many of her students took her up on the call to action right on campus. The UC Board of Regents voted to raise undergraduate fees by 32 percent, and Berkeley students, including some from her own classes, launched a series of dramatic protests. Roy became a key mediator and spokesperson, helping to define affordable access to public education as an issue of social justice.

After the protests, Roy’s audience grew to include people far beyond the campus. She was featured as the primary faculty voice in a January 2010 New Yorker article about the Berkeley budget crisis. More recently, she has tapped into new channels for sharing critical social theory: her TEDx talks “Un(knowing) Poverty” and “Power and Gender in the 21st Century” have each been viewed more than 11,000 times on YouTube. And, as education director at UC Berkeley’s Blum Center for Developing Economies, Roy wrote and narrated a series of animated videos for the #GlobalPov Project, which present accessible but thought-provoking questions about poverty, inequality, and responsibility that can be shared through social media.

In one video, “Who is Dependent on Welfare?” (which has amassed more than 900,000 views), she explains, “Inequality is not natural. It is not the necessary result of the free market. Rather it is produced systematically by policy, by the welfare that is doled out to Wall Street hedge funds and super-corporations….” She acknowledges the diverse understandings of what it means to enact social justice: “For some, the quest is for social and economic equality. For some, it is compassionate capitalism. For some, it is quite simply doing good.” And she suggests a focus of action: “To transform dependency into self-determination is the work of poor people’s movements. To demonstrate the dependency of the wealthy on welfare as well as on the labor of the poor must be our collective work.”

As director of the new Institute on Inequality and Democracy at UCLA Luskin, Roy can model new ways for the university to engage in the collective work of social justice as she develops the institute’s program for research, training, and public outreach. She says, “I’m in the process of figuring out what the institute should do. One thing is to open up spaces where academics and activists and public intellectuals can debate among themselves how best to enact social justice. For example, we need a debate about whether the minimum wage is an effective way of impacting poverty. And we need to examine how inequality and democracy are dealt with in different parts of the world, particularly in the global south.”

Roy’s recent research focuses on evictions and foreclosures in cities around the world—including Oakland. “I’m looking at how poor people’s movements are fighting these forms of exploitation and also creating shelter, creating a right to the city,” she says. Her research will inform the institute’s launch event in February. “We’re going to convene folks from these movements in India, South Africa, Chicago, and Los Angeles,” she notes. “One of the keynote speakers will be David Simon, who created the shows The Wire, Treme, and Show Me a Hero. We’re interested in changing the ways in which media perceptions of poverty and marginalized communities perpetuate forms of injustice.”

Roy calls for “a new narrative around racial equity” in the United States—a frequent theme in her very active Twitter feed. In September she tweeted, “Most imp reading I can currently do: report just issued by the Ferguson Commission. ‘We have not moved beyond race.’” More recently she observed, “Each time I talk about racial dispossession I’m asked: what about class? But when I talk about class I’m not asked: what about race?”

“Questions of social justice often get reduced to the economic,” she explains. “There are other dimensions of disadvantage and exclusion that are not purely economic. The big conversation that is happening in this country is around race. Another dimension is gender. I think of social justice as much more expansive than simply economic disadvantage.

“I don’t think social justice is a goal that can be fully achieved,” Roy adds. “It’s not an end state, in the same way that democracy is not ever a completed project. It’s an ideal we strive towards, an ideal that allows us to think about how far we might be from complete social justice.”