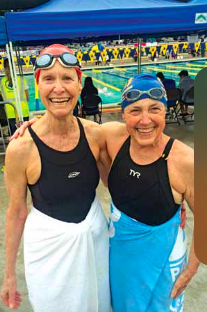 Swimming through the waves

For Ellen Krosney Shockro ’64, achieving success in both athletics and academics is a matter of possibility and persistence.

As a girl growing up, I was encouraged to participate in sports—my father won three national championships and made the Olympic team back in the late 1920s—but not to compete too seriously. This combination gave me the confidence that I could do almost anything without needing to be “the best.”

When I came to Mills, I played tennis and taught swimming. Also at Mills, I discovered what would become my lifelong interest and profession. During my senior year, a new professor had arrived—Dr. LeFevour—and I took all of his “exotic” history classes on Modern China, Modern Russia, and Modern India. In the 1950s, there was such a fear of communism that these courses had not been available. Deeply fascinated with this field of study, I set a goal of earning a PhD in Chinese history.

Like so many others in my class of 1964, however, I married and got on with the life expected of me. But I stuck to my goal and earned my master’s degree at Columbia; eventually, I started my doctoral studies at Claremont Graduate School, with two young children in tow. My children’s swim coach also offered a program for parents. I joined up and, in the fall, started swimming with US Masters, the national adult swimming organization.

Soon enough, in 1979, I undertook my first ocean swim—and yes, I was terrified of things coming up from the deep. A year later, I was entering every race I could find, from San Diego to Santa Barbara. I was not especially fast, but I loved the rush of bounding through the waves, swimming as hard as possible, and finally sprinting up the beach to the finish line. (Even now, I continue to do up to 10 ocean swims each summer.)

Finishing the Ironman triathlon became my next goal—a 2.4-mile swim, followed by 112 miles biking, capped off with a 26.2-mile marathon run. I practiced and prepared, and finally completed two Ironman races, in 1985 and 1986. Meanwhile, I finished my PhD, spoke at conferences, continued teaching, and ultimately landed my dream job, a tenured position in history and humanities at Pasadena City College.

I am still swimming with Masters—now in the 70–74-year-old age group—and at this year’s national meet in Santa Clara, California, I won the 1,650-yard race. Pat Eide Fruin ’65 won the 1,000-yard event; she edged me out in the 500, and we finished one-two. What are the odds that two Mills graduates would finish back-to-back like that? Neither Pat nor I ever imagined we would win a national championship—even if it meant waiting until we were each 70! But both of us could imagine the possibility of winning, and we put in the effort to make it so. People think that it must take sheer athletic prowess to complete a triathlon or win a distance swimming race, but what is even more important is the willingness to set your sights on a goal and have the persistence to see it through.

I am a strong believer in single-sex college education for women for many reasons, but primary among them is that Mills instills in all of us the belief that we can do what we set our minds on, and can even rise above expectations to make a difference in our own lives and in the world. Much has changed for women in the 50 years since I was at Mills. But perhaps one thing remains the same: our lives are like an ocean race, and we each must fight the waves, even as they keep coming, and find our way to shore