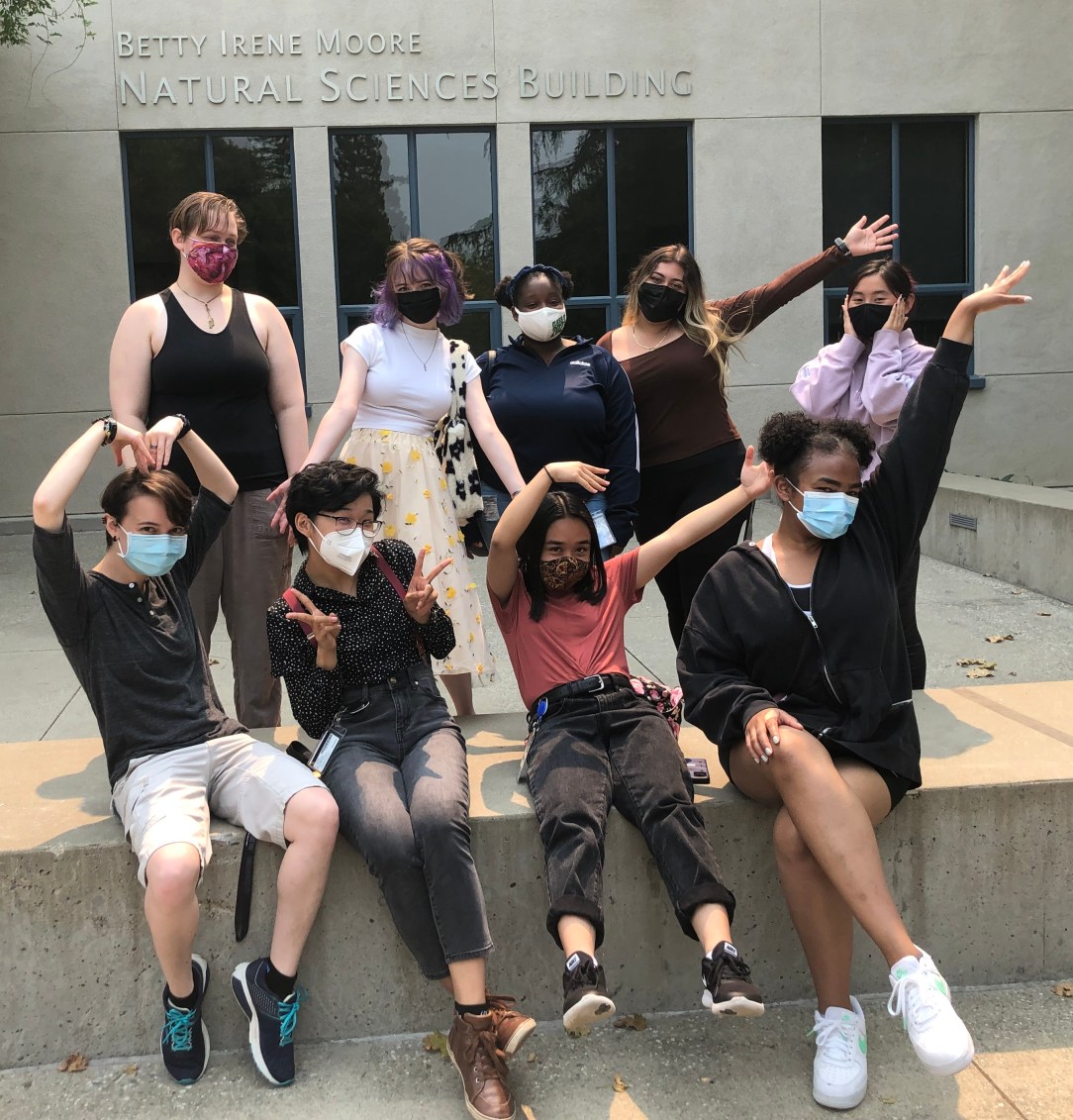 Abigail Jeffers ’21, who graduated last winter with a degree in biochemistry and molecular biology, just experienced her fourth summer in scientific research with Mills faculty. Between conducting some sessions in person and others completely online, she was ready for whatever this summer might throw at her.

“My experience two years ago allowed me to develop important skills that help me work independently now, while my work last summer allowed me to sufficiently understand the background of my current project such that I am able to more effectively conduct research on inteins now,” Jeffers says.

There are three summer science research programs at Mills—Russell Women in Science, Jill Barrett Undergraduate Research Program in Biology, and Hellman Summer Math and Science Program—and after a year away from the lab, they all returned with renewed force in 2021.

Jeffers was a Barrett Scholar in summer 2019 and applied again for 2020, only to find those plans dramatically altered by the pandemic. “Our lab group eagerly awaited the day when we would be able to set foot in the lab for the first time,” she says. “In the meantime, we made the most of our virtual Barrett summer and built a database that catalogued more than 1,600 inteins, such that we could make these self-splicing intervening proteins more widely available as a tool for biochemical research.”

This year, Jeffers is a member of Russell Women in Science. Cris Russell ’70 is the benefactor of this program, which also involves an annual lecture event during most spring semesters—after a two-year absence, the event will restart in spring 2022. Mills students who join the program help stage the event, and they also participate in literature reviews and present at conferences.

Nine Russell scholars worked on campus this summer, and they were split between four “labs”:

• The Chu Lab, which studied ways to chemically transform carbon dioxide and turn it into sustainable products that consumers can buy and use.

• The Faul Lab, which pursued two research tracks: one that examined how nutrients and carbon cycled through the oceans in the early Cenozoic Era, and another that looked at how East Bay watersheds are affected by acid mine drainage and other pollution.

• The Mostafavi Lab (where Jeffers worked), which focused on inteins: small proteins that go through the process known as protein slicing.

Inteins were also the focus for Jeffers as a Barrett scholar. Established in 1998 in memory of Jill Barrett ’93, this program gives students the opportunity to work alongside faculty members on established projects during the summer break and into the new school year. Professor of Biology Jenn Smith, who is also director of the Barrett Program, recruits her undergraduates to “Team Squirrel” to help gather samples and crunch data for a long-term project on California ground squirrels at Briones Regional Park.

In fact, because of the sensitive nature of the data being collected, Barrett Scholars were allowed to continue their outdoor fieldwork in summer 2020. “We were allowed to do so because it was crucial [to] study populations every year as part of a long-term study,” Smith says. “However, last year, we were unable to get into the lab and this advancement has been crucial this year for supporting data analysis and opening up opportunities for learning and making discoveries.”

In 2021, those data included the effects of “stress” hormones on the squirrels when they’re exposed to human activity and how a squirrel’s social connection affects the microbes in their stomachs. The long-term work of Team Squirrel has even attracted the attention of an upcoming PBS documentary, Squirrel Movie!, which gathered footage in early June.

The third program, Hellman, helps students get up to speed on how to work in laboratories and approach scientific coursework. Participants live on campus while taking course modules in environmental chemistry and forensic biology, along with other activities both on-campus and off. Last year, it was entirely online, with students glued to their computers for many hours a day during the program’s two-and-a-halfweek running time.

The in-person lab exposure was especially important in 2021, according to program director and Associate Professor of Biology Helen Walter. She also ran a “STEM reboot” for rising sophomores and juniors: the former, because they went their entire first year without time in a physical lab; and the latter to refresh their lab skills.

“I’ve been hearing from students who graduated that people aren’t hiring folks who haven’t been in a lab in a year,” Walter says. “Besides that, their health and safety are at risk.”

Hellman, which had seven students in the program, also sends participants to local institutions, such as the Exploratorium and the California Academy of Sciences, on Fridays. Of course, those plans were complicated by continuing pandemic restrictions. The Hellman Foundation of San Francisco underwrites this program.

The annual Jill Barrett Undergraduate Program in Biology Symposium returns in the 2021–22 school year! Hear from students about their research findings in Lisser Hall on Monday, October 11; visit tinyurl.com/jill-barrett-21 to register for free tickets. Capacity is limited, and masks are required regardless of vaccination status.