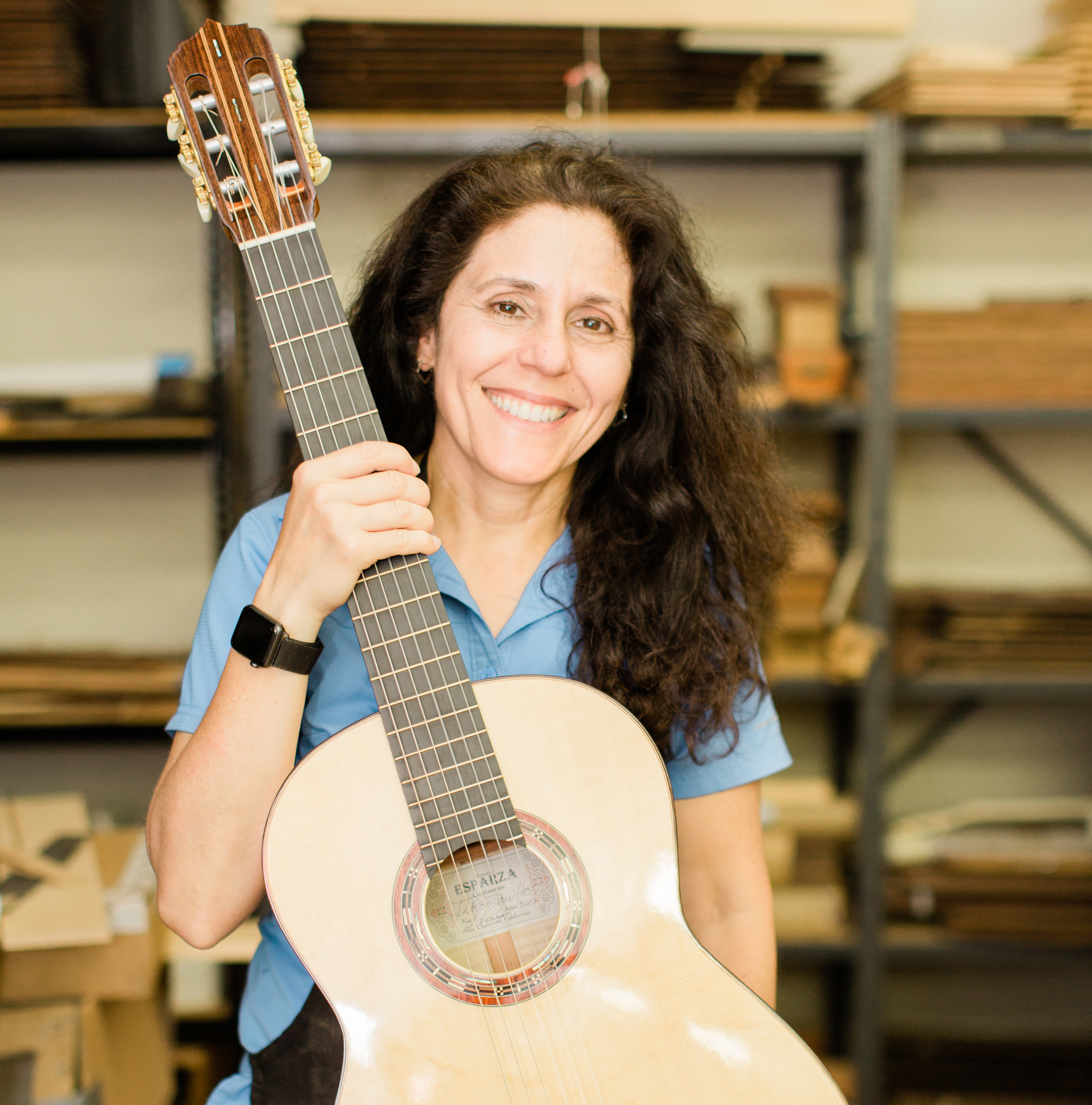 Monica Esparza ’99 is accustomed to being the only woman in the room.

In 2004, she landed a coveted spot in a workshop led by José Romanillos, the master of traditional Spanish guitar-making. After she traveled to the Renaissance town of Sigüenza, about 80 miles northeast of Madrid, she took her place at her workbench among 19 men.

Esparza had also been the only girl in her middle-school shop class, which is where she began her journey as a skilled woodworker. When she took her first guitar-making class at an Orange County community college in 2000 (after graduating from Mills with a degree in Hispanic studies), she was not only the lone woman, but also the only person making a classical flamenco guitar with hand tools.

In Sigüenza several years later, Esparza worked around the clock for three weeks, determined to absorb everything she could. At the end of the workshop, only four out of 20 instruments were ready to be strung. Esparza’s was one of them.

“I had the men hanging out at my bench the last week, trying to ask me questions because they were so far behind,” Esparza recalls. “I didn’t know how well I had performed until my maestro sat with me and started strumming my guitar.”

Over the next 12 years, Romanillos invited Esparza back eight more times. Each year, she’s been the only woman at the bench.

Esparza has since built more than 50 guitars. She showcases her instruments around the world, judges woodworking competitions, and teaches classes in traditional guitar-making and ukulele-building at her space in San Clemente. Each guitar takes about three months to build, and an Esparza guitar sells for $8,000 to $10,000.

She builds her instruments with European flamed maple, Spanish cedar, and European spruce, and she crafts intricate rosettes using dozens of paper-thin pieces of exotic wood. “A lot of modern builders are trying to use artificial materials to give it a bigger boom,” Esparza explains. But those materials make the sound tinny and bright, and the guitar loses its distinct tonality—that warm, deeply resonant “Spanish sound.”

“In the classical guitar world, we want the guitar to speak for itself. Each note has a flavor,” Esparza says.

Most Spanish guitar makers don’t play the instrument, but Esparza knows that playing makes her a better luthier. She took classical guitar lessons while she was at Mills in her early 30s, though she got a feel for the sound in her late 20s by singing in a flamenco choir. These days, she squeezes in guitar lessons while juggling this gig with her family’s beverage manufacturing and distribution company.

“I will try to work on a little Bach piece just to keep listening to my guitar,” she says. “If you play, you understand that half a millimeter in the string length makes a difference.”

Esparza recalls her maestro saying that he had yet to make a good guitar after 50 years of building instruments. To her, that’s the sign of a great luthier: “It’s still a challenge to put my label in my instrument,” Esparza says. “I know how much those instruments teach me. Every guitar teaches me something.”