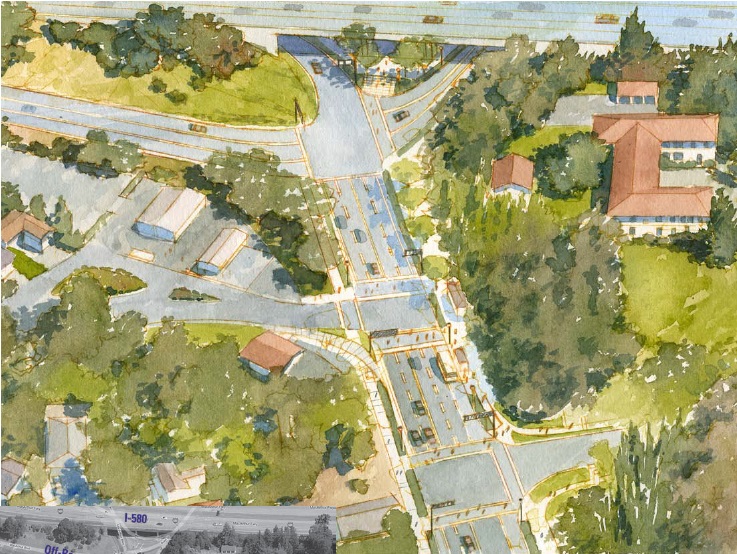 LAMMPS, the project otherwise known as Laurel Access to Mills, Maxwell Park, and Seminary, is transforming the area around campus.

Before the stretch of Interstate 580 that skates across Mills’ northern border was built in the early 1960s, MacArthur Boulevard served as the main access road between campus and the rest of Oakland. While I-580 is now a bustling freeway that transports students and faculty from across the Bay Area to Mills, its construction also had the unfortunate result of cleaving a neighborhood in two—and separating MacArthur into many disjointed pieces.

The LAMMPS project aims to bring those pieces back together through unifying the streetscape and making MacArthur a true local thoroughfare once again. Short for Laurel Access to Mills, Maxwell Park, and Seminary, this revitalization effort is currently underway, with construction dotting the landscape around Mills in nearly all directions. And although the endeavor is ongoing, LAMMPS has been in the works for a number of years—and includes vital input from a Mills alumna.

Alysha Nachtigall ’07, MPP ’08, wrote her public policy thesis on ways to improve the area by upgrading public transit, pedestrian access, and bicycle infrastructure, as well as strengthening the physical connections between the Laurel Business District and the neighborhoods now south of I-580. She followed in the footsteps of others with similar ideas; in 2004, Claire Antonetti, a member of the Maxwell Park Neighborhood Council (MPNC), helped turn the organization’s attention toward making crosswalks along MacArthur Boulevard safer, as well as beautifying the area. Mills first became involved with the MPNC to help with those efforts soon after.

Thanks to a $257,000 grant from Caltrans and a $60,000 match from then-District 4 councilmember Jean Quan, the City of Oakland and the LAMMPS Steering Committee began the planning process in 2009. With the guidance of neighbors engaged through community forums as well as Nachtigall’s thesis, a plan came together to safely boost the flow of all forms of transportation along the MacArthur Boulevard corridor, as well as to make the area greener and more aesthetically pleasing.

“The LAMMPS project is a wonderful example of a community-based plan, developed by Maxwell Park neighbors, Mills College, and the City of Oakland, to address crucial neighborhood infrastructure needs to improve the area with multi-use paths, traffic reconfigurations, lighting, pavement improvements, and landscaping,” says Renee Jadushlever, vice president for strategic partnerships at Mills and a longtime collaborator on the effort.

As with all public works projects, it took time to secure sufficient funding, but LAMMPS officially kicked off in April 2018 with groundbreaking near the intersection of High Street and MacArthur Boulevard. According to Pablo Miras, a civil engineer with the City of Oakland, the estimated time for completion is May of this year.

“It is exciting to begin to see our 13 years of research and work in action and the transformational impact of the improved safety and access, the vibrant link to the Laurel shopping district, landscaping, and other improvements,” Jadushlever adds.

Mills’ Entrance: The existing configuration at Richards Gate forces drivers to contend with a short 50-foot lane for the left turn onto campus, an off-ramp from eastbound I-580 that’s solely controlled by stop signs, and traffic flow from a side street (Pierson) that’s only 100 feet away from the off-ramp. LAMMPS corrects these problems by installing signals at all intersections to operate in conjunction with the others to keep traffic flowing while controlling pedestrian movement. A bus stop will be located on the east side of MacArthur after the turn to the Richards Gate, and bicycle lanes all the way up and down MacArthur will be defined by striping and stenciling on roadways.

MacArthur Streetscape: MacArthur Boulevard south of Richards Gate will narrow from its current width to allow for broader sidewalks and bicycle lanes. London plane trees, which provide foliage along Richards Road on the Mills campus, have been chosen as the tree of choice throughout the MacArthur corridor, and California redbuds, wild lilacs, and lavenders will brighten the sidewalks as well. Further down MacArthur, homeowners will gain better access to their driveways from the road, and accessibility paths, flashing crosswalk lights, and additional stop signs will further protect pedestrians.

I-580 Underpass: At some point in the future, the dark and drab area under I-580 will see life once again. While not a part of this current effort, LAMMPS calls for the triangle of land between MacArthur Boulevard, the on-ramp to westbound I-580, and Buell Street to receive much of the same treatment as the rest of the LAMMPS project area, such as greenery and bicycle lanes. It also stands to benefit from dedicated space for a small dog park, places to sit, and public art. The entire project also prioritizes sustainability with features such as permeable pavement and bioswale to reduce runoff and remove pollutants from stormwater.