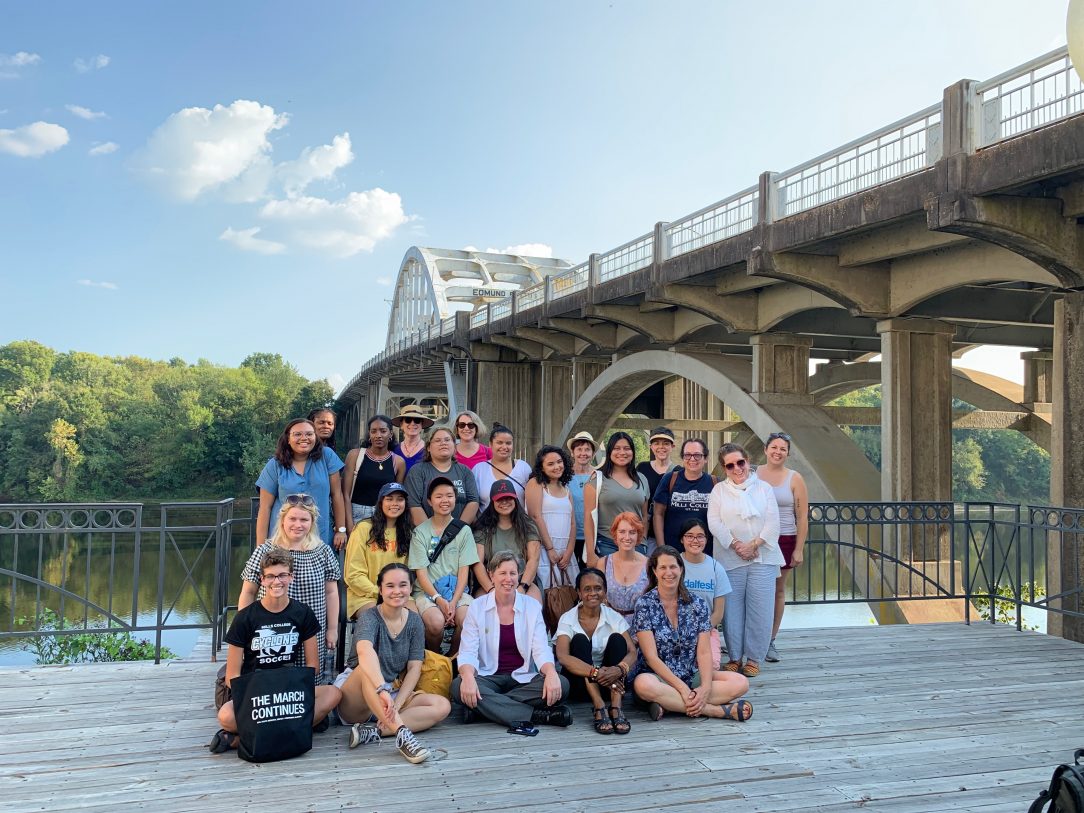 Stepping Outside the Classroom

A history class ventured to Montgomery, Alabama, to learn about the fight for civil rights in a place that still feels the aftereffects.

Two days of learning in Alabama changed this group of students and staff members forever.

If I could have one wish after visiting Alabama, it would be for the state to become as popular of a tourist destination as Philadelphia or Washington, DC. Everyone in the United States would know that visiting the National Memorial for Peace and Justice and the Edmund Pettus Bridge is as essential to understanding this country’s history as the Liberty Bell or the Washington Monument.

Anderson and I, along with 17 fellow Mills students, were lucky enough to spend two full days in Alabama in early October 2019 as part of a study-away course, taught by President Elizabeth L. Hillman, titled Civil Rights Today. As much as the course taught us about history, it raised questions about the future of civil rights in an age where racial violence and discrimination are still prevalent.

Created by the Equal Justice Initiative, the National Memorial for Peace and Justice has hosted more than 400,000 visitors since its opening in April 2018. To me, our early visit to this memorial—as a group of California college students—felt historic.

When we visited, it was 100 degrees outside. With the heat and humidity pushing down on us, we ran our fingers over the names of some 4,400 documented people who had been lynched in the US between 1877 and 1949, etched in steel. Stark life-sized figures of enslaved people stood beside us as we read powerful quotes from luminaries such as Martin Luther King, Jr. and Toni Morrison. Another statue, seen on the way out of the memorial, featured a dozen faces with their arms above their heads. Our group was particularly struck by this piece, which seemed to show its subjects rising up. “But what if they’re really sinking?” one student asked. As it turns out, the piece, created by Hank Willis Thomas, is a comment on the current issue of police brutality; the figures are holding their arms up in surrender.

At the accompanying Legacy Museum—located in the area of a former warehouse used to house slaves—we read heartbreaking stories of families torn apart by slavery as well as newspaper ads from parents and children searching for each other after emancipation. We saw signs from the Jim Crow era and even holograms depicting slaves behind bars—one woman’s
spiritual singing rang in my head for hours. The museum made clear the trajectory from enslavement to racial violence today in the forms of mass incarceration and police brutality. We saw photos of children sentenced to death, and handwritten notes to lawyers from people in prison—some
children themselves—and others who seemed to have given up on ever being released.

“I struggle with calling it history,” said Devin Carr, during one of many reflection circles on the trip. “It’s all still happening today.” Carr, an Alabama native who works as the director of the Center for Student Leadership, Equity, and Excellence at Mills, was tasked with preparing us students—most of whom had never been to the South—for interacting with a culture vastly different from our own. Many students expressed fear toward a place they had learned to view in a negative way, given its history of racial violence.

“We are in the bubble of Mills and the Bay Area, and terrible things happen here, too,” Carr said. He explained that racist symbols such as the Confederate flag mean that Southerners are more direct about their views—something he prefers to those who hide their bigotry.

Rather than scaring them away, any hateful views observed in the South highlighted issues faced in California for students.

“A lot of people painted a really scary and intense place to me,” Anderson said. “But in Alabama, I thought… this could be Mills. Mills could be here. We’ve had police brutality a block away.”

At a later visit to the Southern Poverty Law Center, we were particularly moved by the details that lawyers and other staff members shared with us about the work they are doing to fight systems of inequality. In a state that removed its Confederate flag from the state house only four years ago, there’s a lot of work to be done.

For student Hannah Esteban Landis ’20—an ethnic studies major who calls California home—the trip was humbling, and highlighted advantages she didn’t even realize she had.

“When I went to Alabama, I realized it’s a privilege to learn about these things in a classroom and be able to put them away—these things are impacting people today, and it made me rethink my priorities,” she said. “This trip challenged the way I think and talk about people from the South. Assuming that everyone there is racist really invalidates the people of color
living there and the people doing a lot of good work—even though there is a lot of racism, there are people working to combat that.”

Esteban Landis was not alone—most students were surprised and sometimes delighted by the interactions they had with Southerners, who seemed open to discussing their state’s history. For instance, a choir member invited us to enter the Brown Chapel AME in Selma, which was one of those little things that connected us with places and people who are living, breathing, and singing history.

“It’s important that your work in social justice is influenced and informed by a multitude of different experiences and understandings of how the world works,” Carr said. “If you only have one experience, or if you’ve only lived in one place, I don’t think you can fully show up and do the work of holistically creating a more equitable society.”

The sites and stops on our itinerary exceeded our highest expectations, brought us to tears, and educated us in ways a classroom never could. But many of us expressed that it was the unexpected things, the surprises, that tipped our experience from enlightening to heartwarming.

During an hour of free time to explore in Montgomery, we planned to briefly peek inside the state capitol building—partly for the air conditioning. Instead, we were greeted by tour guide Aroine Irby, a state historian of Alabama who participated in the march on Selma. During Irby’s hour with us, he led us to a central space and asked us to form a circle. Our group obliged, open to anything, as he instructed us to turn around, lie down on the cool marble floor, and look up.

“I don’t normally do this, but this is the best way to see it,” he said. What we saw was the incredible dome ceiling—patterns of pink and gold, intricate murals, and the autumn light shining through green and yellow stained glass.

In addition to fortuitous moments like this, one of the biggest takeaways for students was bringing this experience back to Mills in the form of activism or education. Amanda Padilla ’21 is one of many who feels the need to speak up about voting rights.

“When we were actually crossing the Edmund Pettus Bridge and then met the people who had been a part of Bloody Sunday, that was the moment where I thought, people died for my right to vote,” she explained. “That’s why I’m so passionate about making sure that I register to vote and that people understand that we should register to vote.”

Padilla and teaching assistant Jessica Greely ’21 are planning a “Know Your Rights” week at Mills this coming semester to educate students not only about voting rights, but about issues appearing on the ballot. “Being able to actually read and comprehend what is being said in a non-biased way is something that I want to bring to the community,” Padilla said.

As for me, I laughed, dined, roomed, and reflected with students I’ve never connected with on campus. The trip brought me out of my own bubble-within-a-bubble-within-a-bubble, the English department—so now, when I leave Mills Hall, my dorm room, or my workplace, I’m greeted by 18 new yet familiar smiles on campus. This trip to Alabama reminded me of Mills’ unique, intimate nature, and the experience will forever
shape my memory of my time here. ◆