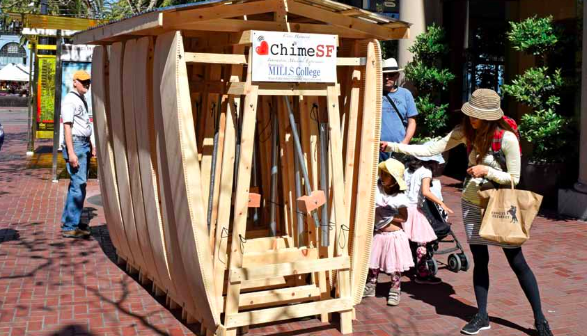 Sound and the City

If music can soothe the savage beast perhaps it can also bring a bit of serenity to the stressed-out city dweller.

Gottwald and Watkins stayed on site with the instrument, situated not far from the Ferry Building and bell tower at the foot of Market Street, for most of the three-day festival in April. “People would walk up, intrigued by the aesthetics, and then they’d try to figure out how to play with it,” says Watkins. Passersby would quickly move from perplexity to discovery as they figured out the connections between chimes and hammers and levers. A wide cross-section of the city’s population was drawn to the experience—business people, shoppers, students, and tourists. “I loved seeing people figure it out,” he says. “There was a whole awakening process, a piercing of their personal bubble. The distinguishing characteristic of all these people was that they were smiling—if they weren’t smiling when they came in, they were smiling when they left.”

The development of ChimeSF was the culmination of chance meetings and unified ideals. Gottwald and Watkins met as roommates in Mills student housing and found common ground in their concern for improving people’s daily lives.

Gottwald, who studied sculpture and visual arts as an undergraduate at the University of New Mexico, says, “The prime goal of my work is to enable the creativity of others, to help them realize that they have something to offer, too. I like the idea of accessibility and creating an inclusive experience.”

Watkins’ main interest is to foster social and economic vitality through human-oriented urban design. Embracing public space can revitalize entire neighborhoods, Watkins says, citing an example from Pennsylvania where merchants oriented their businesses toward an old railroad track that was repurposed as a recreational path. As people started using the path more, they also frequented the businesses. He also points to the concept of “healing spaces”—places that increase both physical and emotional well-being. “Giving people destinations, especially ones that don’t cost money, is a way to do that. So often these days everyone just wants to get their hand in your pocket— public art offsets that,” says Watkins.

The two began talking about how to merge their interests, and when Watkins saw the call for entries for the Prototyping Festival, he thought it could be a perfect venue for their combined skills.

“The policy guy is looking at things in terms of urban design on a city scale, while I’m looking at things on a micro scale within that larger system. Having those two perspectives operating together gave us a nice focus and cool equilibrium,” says Gottwald.

“We’re gaining all this high-level knowledge in the classroom, and ChimeSF was like a laboratory to bring that knowledge directly into a project,” add Watkins, who recruited a cross-departmental team of graduate students in business, computer science, music, and public policy to manage media, marketing, and other aspects of the project. This network of support, Gottwald says, enabled him to focus on his strength: instrument building.

“We started hanging out and experimenting,” Gottwald says. “One night we just started hitting things to figure out: ‘What sound do we want? What action do we need?’ We just picked up all the junk lying around the workshop—wires and pipes and whatnot—and, very quickly, very surprisingly, it all just fell into place.”

The final design placed a set of chimes inside a carapace of curved wooden lever keys. This eliminated the problem of having separate parts that could go missing or be used improperly, and gave Gottwald the opportunity to tune the chimes to a pleasing C major scale.

“We could have made it very dissonant, very noisy and clangy,” he says, “but we wanted players to get a reward for interaction and a sense of accomplishment. I didn’t want it to be an alienating musical experience. Why not make something to bring people together?”

Ensuring a universally accessible interface was another guiding principle for the team. The instrument had to be functional for people of any age, height, fitness level, or musical ability. “What we learn at Mills about social equity really resonated with us in this project,” says Watkins. “We thought about that as we went; we wanted this to be able to be played by anybody.”

It was built to be visually and tactilely appealing, and Gottwald’s training in the fine arts was apparent in the satin-finished wood. It also had to be approachable from many sides, and to allow a dozen or more players at once.

And, it had to be fun. Gottwald, whose child is entering Mills as an undergraduate in the fall, was inspired by how playgrounds bring people together. “I’ve built relationships at playgrounds with neighbors, my kids’ friends, and parents,” he says. “They’re focal points where the community comes together.” Watkins notes that there are multiple ways for people to relate through ChimeSF. Playing together with someone on one side and playing with people on the opposite side created different experiences, and there was a strong dynamic of performance and entertainment between players and bystanders. “We had a whole Girl Scout troop play it, there were at least 14 of them, and they were like a baseball team calling people in off the bench. I think all those different ways of creating relationships is important for public art,” he says. “Chime can be an amazing element of a really cool public place. You drop something like this into a space, and suddenly the space is activated.”

ChimeSF generated a lot of interest among the public and from organizations—both the Exploratorium and an architecture museum in Santa Cruz suggested the possibility of hosting the instrument—but Gottwald feels his next step is clear. “I want to make another public art installation for this kind of thing. It’s been proven to me how valuable this is. Communities need these kinds of places to draw people together.

“ChimeSF is for everybody—it’s for moving our community forward,” Gottwald says. “It’s for using these little moments to recognize that we are here together. We don’t have to just zip by and ignore each other. We can stop and congregate and have some fun, and recognize the relationships that are happening.”