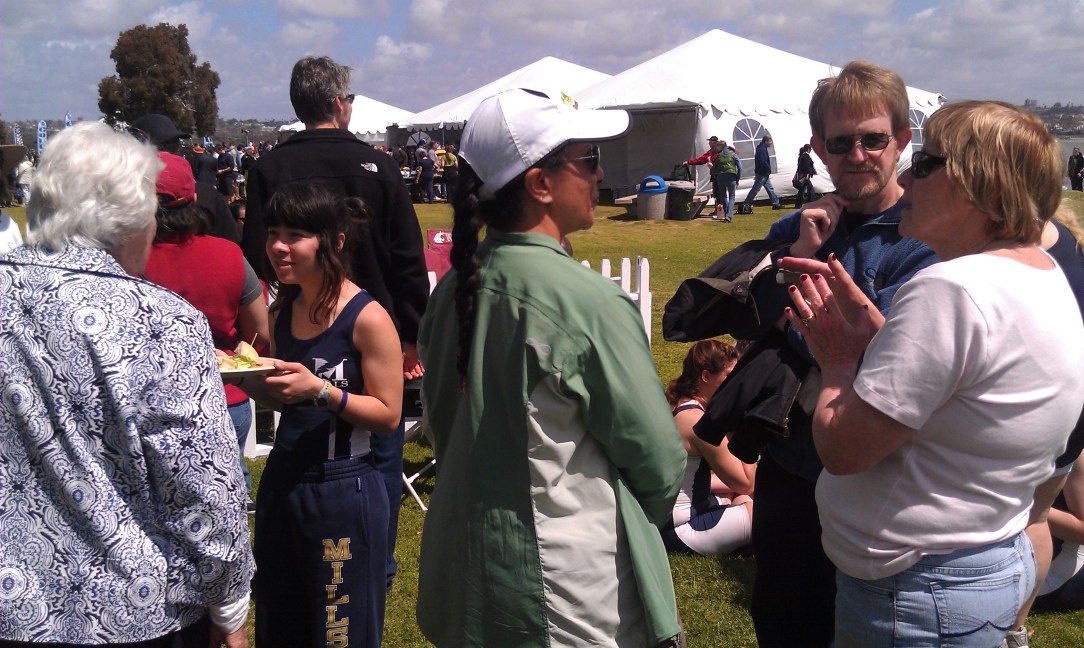 Whatever your age, major, or geographic location, alumnae clubs offer fun and rewarding opportunities for socializing, networking, and giving back.

For many of us, our time at Mills was a season of change, of challenge; it stretched our intellectual boundaries and nurtured our strengths, surrounding us with bright, driven women from around the world. Our student days may be behind us, but Mills can still be an important presence in our lives, breaking down boundaries, helping us reconnect, and introducing us to new friends—friends who share the same formative experience.

President Alecia DeCoudreaux has been instrumental in bringing alumnae together. During her first year in office, DeCoudreaux met with alumnae across the country, often drawing enthusiastic audiences with a fervent interest in maintaining ties with fellow graduates.

That’s how Malindi Zimmer ’98 ended up as a leader for the Portland Mills Club in Oregon. After attending an event featuring President DeCoudreaux, Zimmer was keen to join a group with other alumnae. But, she says, “I contacted Mills and learned that there was no longer an active local club.” So she volunteered to start one up herself.

“When I initially moved to Oregon, I didn’t really know anyone, and I thought becoming involved in a Mills club would be a great way to meet some people,” Zimmer says.

Wendy Brody ’68 has a similar story. When she moved to San Diego four years ago, the once-active alumnae club in that area had been defunct for over 10 years. Brody used President DeCoudreaux’s visit as an opportunity to reach out to other alumnae in the area who might want to connect with fellow Mills grads.

“Before I introduced [President DeCoudreaux], I asked if there was anyone who was interested in reactivating the San Diego Mills Club,” Brody says. She ended up with 15 to 20 responses. The club started small: a sculpture tour at UC San Diego, a spring luncheon gettogether. Now in its third year, the group offers a wide range of different activities to draw in the diverse array of Mills women: a happy hour for younger grads, a welcome event for new Mills students, and, most recently, a tour and presentation by the president of the Salk Institute.

“We definitely try to come up with events that will reach a broad audience,” says Sarah Wigdor-Roberts ’04, a member of the San Diego group’s steering committee.

The Mills College Club of New York faces a similar situation: “Trying to figure out what engages alumnae living in a vibrant, action-packed environment such as New York is a challenge,” says Annette Chan-Norris ’65, the group’s cochair. Her own favorite events from last year were a docent-led private tour of an exhibit at the Jewish Museum and a tour of the Glass House in New Canaan, Connecticut. “Both brought alumnae together in unique settings, and the lunches that followed were accompanied by great conversations,” Chan-Norris says.

As in real estate, alumnae club activities rely on location, location, location— groups often plan events that are fitting to their unique region and member preferences, says Caitlin McGarty, who supports alumnae clubs through the Office of Alumnae Relations. The Seattle Mills Club, for example, holds traditional events like an annual holiday party, but they’ve also had great success with smaller events that reflect a uniquely Pacific Northwest slant, like a day of bread baking at the home of Trina Cook ’93 and their upcoming salmon barbecue.

“It was really fun to be able to teach something that I know how to do,” Cook says, adding that she enjoyed the event’s casual vibe. Anne Repass ’66, also of Seattle, credits the broad range of ages in their group for coming up with ideas that appeal to all types of alumnae, whether they prefer lectures and museum tours or informal happy hours.

It’s just this type of variety that makes for the most vital clubs. Successful groups find ways for everyone to help. “There’s really no contribution too small,” says Joni Roylance ’02, MA ’04, a college English instructor in Portland. “You can actually contribute quite minimal time and still build a community,” she says.

Roylance notes that even younger grads—who face the challenges of trying to juggle career, family, and alumnae involvement—can play a significant role. “When younger alumnae aren’t as participatory, it’s not because they don’t feel that deeper connection,” she says. Even just a few hours on email or Facebook can make a difference.

Diligent alumnae volunteers are the driving force in the most thriving and inclusive groups, but whether the club is brand new, recently revived, or long-established, the Alumnae Relations Office is available to help. The staff works with club volunteers, assisting with email outreach, securing faculty speakers, and providing some logistical support.

“The College has worked with us so well that we feel like we’re hosting a Mills event on the Peninsula,” says Anna Henderson ’80, president of the Palo Alto Area Mills College Club. Beyond bringing alumnae together, the club events provide a link back to the campus and an affirmation of shared experience.

Trina Cook agrees. “It’s the closest thing to being back at Mills,” she says. Being part of a local alumnae group creates an instant network of professional and social contacts, and provides a sense of community and belonging. “Joining a Mills group can be a great way to find like-minded women,” notes Anne Repass.

It’s also a great way to give back. Many alumnae clubs, including those in New York and Palo Alto, are directly involved in fundraising—holding benefit events that raise money for scholarships, for instance. Supporting Mills can take many forms, though. Anna Henderson looks at it this way: “If we can help alums stay connected to each other, that is supporting the College.”

Those connections are powerful. They keep people engaged with the Mills community and with one another. And, for nearly all of the alumnae mentioned above, the rewards of being involved with their local Mills club have far exceeded their expectations.

“When I first joined the committee, I thought more of what I would be giving versus what I would be getting,” says Joni Roylance. “In fact, I feel like what I get from it has been far more than what I’ve been giving.

To find your local alumnae group, see alumnae.mills.edu or call 510.430.2123. For the latest news about events in your region, make sure to create an account with the online alumnae community and keep your contact information up to date!