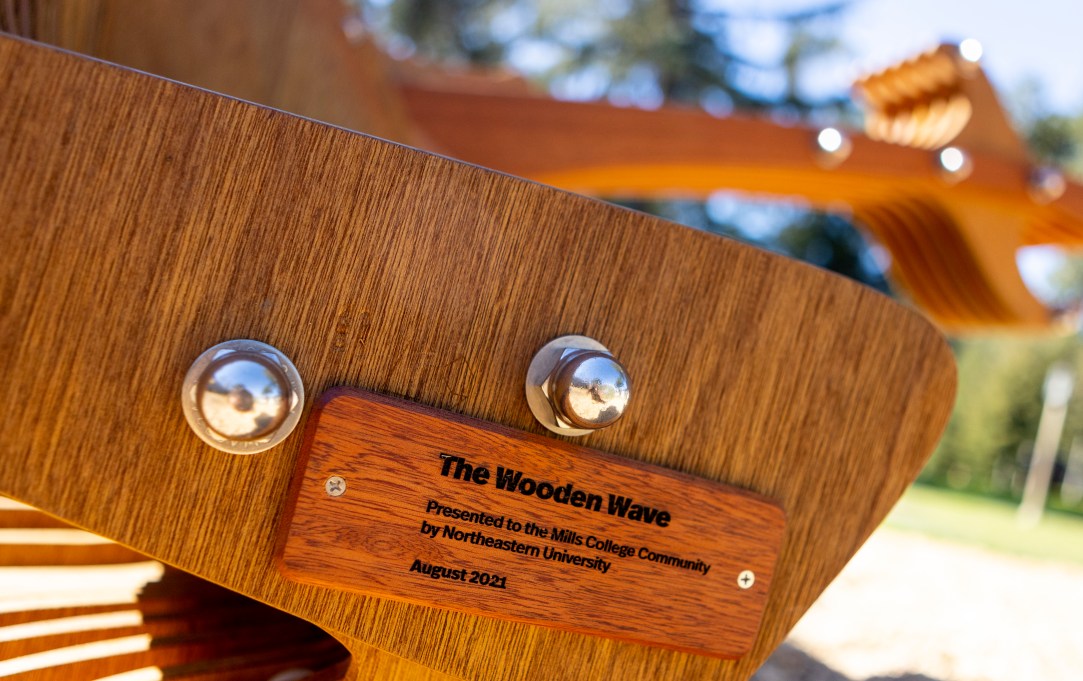 After the January rains this past winter, an unusual sight popped up between the Student Union and the Moore Natural Sciences Building: a wooden sculpture in an unusual combination of a bench and a seesaw. As the weather clears up, it can often be found crawling with Faculty Village children—or students of a slightly older vintage.

Gifted to Mills in August 2021, the installation is an interactive art piece titled “The Wooden Wave” that matches similar pieces on the Northeastern University campus in Boston. The original work was designed by four Northeastern architecture students in the fall 2020 Furniture Urbanism course, which saw four designs overall that were crafted in collaboration with Northeastern’s facilities department and installed in various places on campus. The project aimed to create a sense of community in shared outdoor spaces.

In 2021, after the announcement of the impending merger between Northeastern and Mills, Northeastern President Joseph Aoun decided to ship a sister version of the design to Oakland as a symbol of partnership. Four other new manufactures will become permanent additions to the Boston campus.

However, the original installation was constructed with poplar lumber and plywood, a combination that was meant to last four or so months and would not have weathered the elements. So, the original four students—Alexandria Batiste, Mark Lewis, Adrian Ramon, and Adele Biehl—regrouped and submitted new specs to the on-campus carpentry shop. Materials in the five new benches are much hardier, ranging from Brazilian hardwood to mahogany—and include a clear varnish on top.

The West Coast version of “The Wooden Wave” hosts Millsies of all sizes wanting to play, to chat, or both. The past year, with its various ups and downs, has been made manifest in functional form.