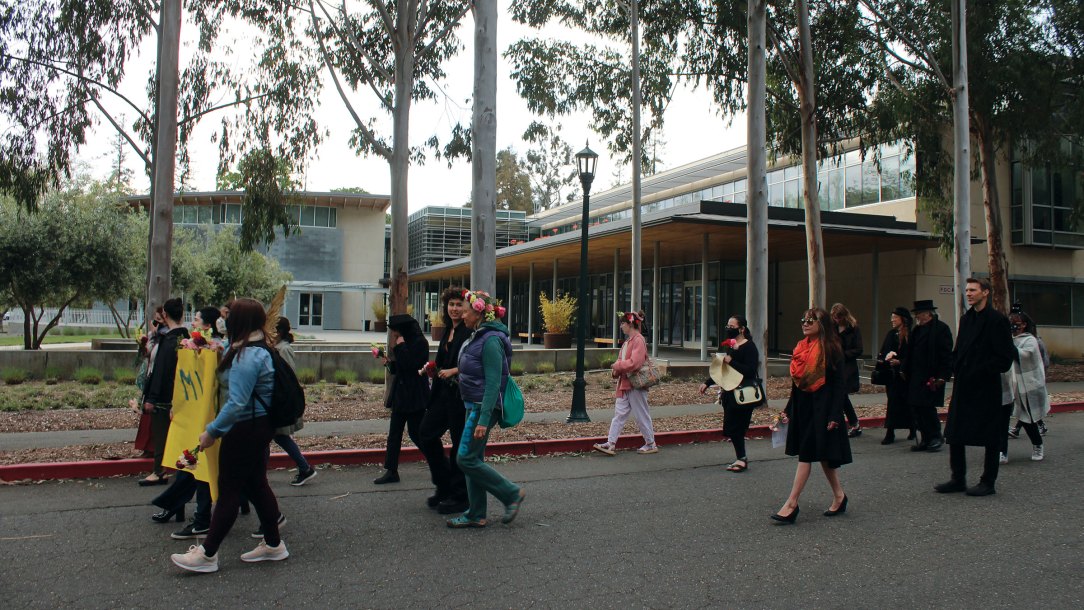 Graduating arts students commemorated the end of an emotional year with installations and performances that met the moment.

As the final semester of Mills College as a standalone institution was winding down, many of the usual year-end art projects took on a bittersweet tone. The final performance of the four graduating MFA dance students was titled Coda: Final Curtain, and it also included a film of the work of the late Professor Emerita of Dance Rebecca Fuller, MA ’54. Meanwhile, the documentary theater class, taught by Director of Theater Studies Victor Talmadge, capped its full year of studies with an original play titled Womyn, based on extensive interviews the students conducted with members of the Mills community who participated in and recalled the Strike of 1990.

Chief among these projects was Memento Mori: A Celebration of Life at Mills, a live-action performance piece that accompanied the final exhibition by graduating studio art seniors. While the exhibition itself, Ouroboros, was on display at the Mills College Art Museum (MCAM), the participating students invited community members to join them outside on the evening of Wednesday, April 13, to express their grief and sadness over the end of Mills as an independent institution.

Chalk was laid out for attendees to write their thoughts on the grounds, and a lush array of fresh flowers was available to turn into boutonnieres, bouquets, and crowns. Alessandra Bolger ’22 introduced a program that included music played and sung by Sage De Lafontaine ’22, impassioned words from local civil rights attorney Monalisa Wallace, and remembrances from students and alums. Before the assembled group headed out on a march around campus, scored by resonant drum beats from MFA music students, those in attendance were invited to drop mementos into an urn, which was then buried in the ground right outside the main MCAM entrance.

Two of those items were placed in the urn by Professor Emerita of Book Art Kathleen Walkup: the first, a capital M typeface from the Book Art studios, one of the only types that survived from the Eucalyptus Press founded by Rosalind Keep in 1930; and the second, a small engraving of the Mills College seal mounted on wood.

“Because printing and book art have been an integral part of the College for so long, I felt it was important to memorialize them in as many ways as we can, and I loved the idea of the students encapsulating some of the College’s rich history and meaning in this ceremony,” she says. “I was glad to be a tiny part of it.”