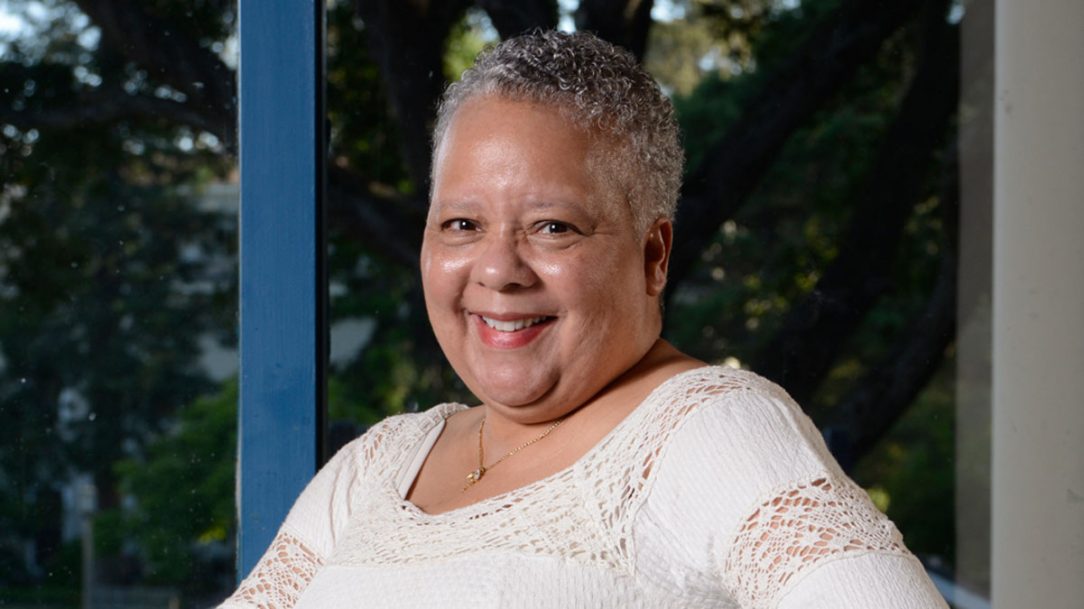 Pride and pain: Coming of age as a Black woman at Mills

Amid the tumultuous social change of the 1960s and early ’70s, one woman’s undergraduate years were marked by racial barriers and prejudice–as well as personal, intellectual, and creative awakening.

“Mills Thrusts White Values on Black Students,” the headline screamed. Who would dare to write about such a touchy and emotion provoking subject in the tumultuous 1970s?

I would. Yours truly.

And what academic institution would allow such a potentially divisive and troublesome accusation to be printed for all of campus to see?

The head-spinning duality of this simultaneous rejection and encouragement defined my relationship with Mills began before I even set foot on campus as a student in 1969. My high school math teacher was so supportive of my potential acceptance to Mills that he took it upon himself to go to campus and pick up my application materials and then sat next to me while I filled them out. “You are going to Mills,” he said. “You belong there.”

My chemistry teacher took the opposite tack. Once he learned I had been accepted—pending final grades—he gave me an F and announced to the entire class, “Sheryl thinks she is going to Mills, but she isn’t.” Looking directly at me, he spat, “You don’t belong there.”

I called the admissions office to explain the bad grade I was about to get. I could sense the smile in her voice as the kind woman on the other end of the line said, “Well, you are not entering as a chemistry major, so we will just not count that grade.” My panic transformed to relief, but my ride on the pride and pain train had just begun.

I am told I was among the largest entering class of Black women in the history of the College. Women of color had been at Mills for years, but not in significant numbers. We were there because major battles in our ongoing struggle for equality and entry into forbidden places had been won. The results of protest, agitation, and community organization had coalesced to make us desirable to, and needed by, Mills. Many inhabitants of this lush green village wanted this change to come. But more than a few resistors felt that the institution had caved in and granted admission to “less than qualified” students. There was a strong sentiment that we were to be tolerated, but could not really belong.

The facts, of course, were quite different. We were gifted high achievers, risk takers, and creative thinkers. We were well aware that our high school years coincided with the end, after 88 years, of Jim Crow laws enforcing racial segregation. The ongoing struggles of the Black Power Movement, the surging rise of feminism, and the anger of protests against the unjust war in Vietnam were among the things that framed our development. We were the Black Student Union pioneers; the Black Panther–meeting class cutters with bright blue National Honor Society sashes around our necks. We were ready for what we would learn. We would not be ignored.

Our en masse, undeniable, and visibly Black arrival in 1969 provided Mills an opportunity to remain a socially relevant institution and to transition from a finishing school for privileged ladies to a special place successfully preparing women leaders of the future. That same year, Mills established its Ethnic Studies Department. It seemed as though we were partners in change.

But the internal battle spurred by this monumental shift would define the pain and pride of my years at Mills. I would stand on this unsteady foundation as I grew from girl to woman in a place that at once encouraged my free expression, denied its validity, and then gave me the skills and knowledge to speak out even more strongly.

Within a month of starting classes, I became totally immersed in the joy of Mills’ academically open atmosphere. I felt I could do anything. I joined the staff of the Mills Stream, the campus newspaper of the time. I delighted in long sessions at the Tea Shop with my study buddy. I made the Dean’s list during my first semester while holding down a work-study job. But my euphoria was cut to the quick when one of my English professors called my mother to tell her I needed to quit my job. The implication was that a true “Mills girl” had a requisite rich daddy and did not need a job. Knowing that I would never be one of the girls who picked up hefty checks from the post office each week, that elitist admonishment pierced my joy with a stab of pain.

Other wounds were inflicted without words: I remember the sideways glances, the eye-rolls, the scattering of the assembly as I approached, the mouths set in straight and recalcitrant lines as responses to attempted academic participation, the unreturned smiles. Those nonverbal declarations became embedded in my blood and bone. The outright rejection of opinions and thoughts were most jarring. In an assignment in which we had been challenged to be creative, my suggestion that Shakespeare’s sonnets might have been written to a Black woman earned a failing grade and a harsh rebuke.

But I had not arrived at Mills psychologically or emotionally unarmed, and I recovered quickly. Plus, it was already too late. I had become a Mills woman. It became my mission to survive the dichotomy because failure was not an option.

My newspaper column, “Sheryl Raps,” served as a way to remind myself that I had come to Mills for something and I would not leave without it. I knew the column was an experiment for some, a way to show the college was “down” with students of color; it was also a pure example of the academic freedom Mills was and is still known for. I readily embraced the opportunity, and I wrote to provide another point of view, hoping my words would help, in some small way, to expose the issues and, hopefully, move the change along. I wrote to mask the almost daily fear of the cop who would stop me at the back gate, suspicious of why I was coming out of “that campus,” protecting the place from people like me. Most of all, I wrote to feel the joy of expression and to revel in the excitement of involvement.

And at Mills I also found support and freedom. There was the professor who apologized for referring to Black people as “colored folks” in class and taught me concepts of cultural relativity. (His note in my Blue Book, “what’s practiced in another culture isn’t necessarily appropriate to your own,” made him one of my Mills heroes.) The blessing of the creative writing teacher who helped me to see writing in visual terms and patiently engaged me in discussion. The gift of my Mills sisters who to this day greet me with smiles and warmth that is special beyond words. This is how the pride was delivered and nourished.

But most of all, it is the true meaning of that headline at the beginning of this story and others I wrote in the Mills Stream. My 20-year-old self was writing about what I saw as wrong at Mills, and I was given absolute freedom to do so. I was a part of the campus discourse, and I belonged there.

My writing back then delighted some and incensed others, and that too was an invaluable part of my enlightenment and education. The adamant curtain of disapproval became more and more transparent and fell away completely as I invoked my ever-expanding voice. At Mills, I fed my love of words and found my creative heart.

When I graduated in 1973, I was both a justifiably resentful and grateful recipient of an invaluable and well-earned gift: a degree from Mills College. The push and pull had never stopped. It had cost more than I could assess in scars unseen. It is still paying more than I can count in accomplishment and affinity.

Sometimes I look back and think I must have imagined much of it. And sometimes validation that my experience was quite real comes out of the blue. While chatting with a member of my class at a recent Mills event, her long-held thoughts fell out in words: “Oh, so you are one of the ones they ‘let in’ in 1969,” she smirked.

After almost 40 years, pain was still being inflicted. Was I still hearing that I was not quite an authentic “Mills woman”? But her words did not penetrate. Because after all, I was standing among some of the most accomplished women on the planet, some of us soon to be golden girls, all of us proud to be a part of this challenging and inspiring College.