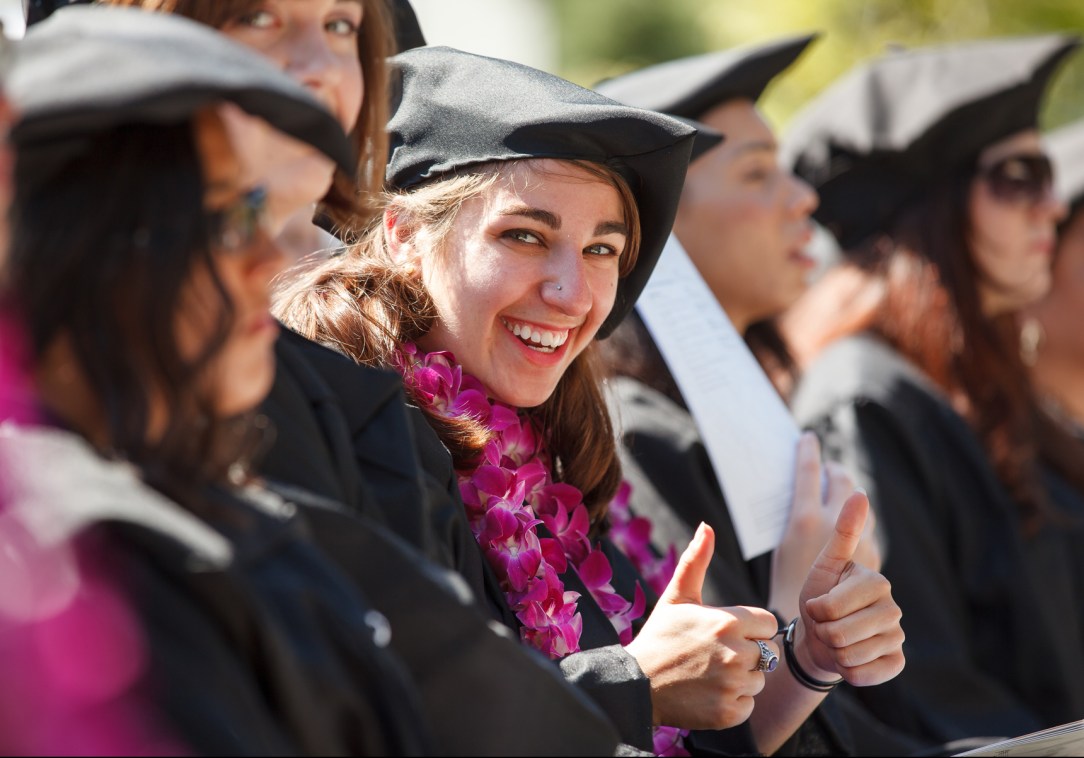 The graduating Class of 2012 demonstrated their philanthropy with a well-orchestrated gift campaign that raised more than $8,000 and achieved a 42 percent participation rate.

Members of the Class of 2012 not only celebrated their individual accomplishments when they received their baccalaureate degrees at Commencement on May 12, they also a marked a great collective achievement with the legacy they left behind: the Class of 2012 Lavender Scholarship. Established with the senior class gift of more than $8,000, the scholarship is being awarded this fall to a Mills student with financial need.

But there’s more to the class’ legacy than the scholarship itself. Forty-two percent of the class donated to the senior gift—an impressive participation rate that is now the benchmark for future graduating classes to beat.

The class mobilized such high participation through a semester of creative effort. The Senior Class Council began with a fundraising goal of $5,000 for the class gift, but its main focus was to get as many students as possible to participate actively in the campaign. By Commencement, the seniors had exceeded their dollar goal, recruited nearly half their class as donors, and procured additional support from faculty, staff, parents, and alumnae.

“The point of emphasizing participation was to bring our class together and to make our entire class feel like they were making a difference,” says KC Callender, vice president of the Class of 2012.

Modesta Tamayo, who served as president of the Associated Students of Mills College during her senior year, understood the importance of getting everyone involved. She found that many students were reluctant to donate because they could only give a small amount. “We tried to combat that by telling people that their contribution could be just a quarter or a dime,” she says. “It is whatever you can do.”

Following a conversation with a student who explained that she couldn’t donate to the senior gift, Tamayo came up with a creative way to address a need, bolster participation, and foster community. “I asked, ‘If I gave you one dollar right now, what would you do with it?’ and she said, ‘Well, I guess I would donate it,’” Tamayo recalls, and they did just that. Over the course of the campaign, Tamayo gave multiple classmates money from her own pocket so that they could participate. In the end, most students who accepted money from Tamayo turned around and offered money to other classmates so that they could participate, too.

“It makes a difference when you are that up front,” Tamayo explains. “For many students, the campaign became a way to ‘pay it forward.’”

“I was really nervous that they wouldn’t get up to that level because it represented such a big leap forward,” says Elizabeth Coyle, associate director of alumnae outreach, who served as staff support for the campaign. “But the students were just so eager to make it work. They really blew it out of the water.”

President Alecia DeCoudreaux provided further motivation when she offered to make a personal contribution to the campaign based on the participation rate: $2,012 if the class met their 30 percent goal. “It was important to me to indicate to students that I supported their efforts and wanted to see them succeed,” DeCoudreaux says.

“The challenge really got the students’ attention,” says Coyle. “It showed how much their campaign was recognized and valued by the College.” The President’s donation was also a tangible demonstration of her dedication to students, many of whom felt a sense of disillusionment following staff layoffs in December. “We all knew and experienced the fallout of the financial crisis, and we as a class wanted to feel supported,” says class historian Meaghan Leferink.

Senior Class President Jack Elliott feels the gift showed DeCoudreaux’s commitment to students’ goals. “She was grateful that we were working so hard,” says Elliott. “I really think that President DeCoudreaux is a huge champion of Mills and its students.”

In return, surpassing their participation goal shows students’ dedication to the College, Elliott says. “We sent a message that Mills is worth something to us and that it should be worth something to other people as well,” Elliott explains. “It tells everyone else that they should pay attention to Mills.”

From the beginning, the campaign was inclusive of all voices. The council surveyed the class, asking for feedback on how to use the funds, then hosted an open forum where students could vote and share opinions about where the gift should go.

The class also reached out to students in new ways: Callender put together Mills’ first ever YouTube solicitation, a video of President DeCoudreaux offering her challenge gift. Another student, Susan Summerfield, sent an email appeal to every senior, asking them to forgo a coffee and instead put that money toward the campaign.

Leferink, a music major, wrote an original song to promote the cause. With lyrics that emphasize donating as a way to leave a legacy, the chorus appeals to the need to give back: “We’re working for a scholarship / Donate / In many convenient ways / Donate / And show that a Mills education pays.” She posted a video of the song on Facebook, where it scored hundreds of views. She also performed her song at fundraising events and at a thank you reception for senior class donors hosted by President DeCoudreaux.

“People thought it was hilarious. By the end, they were singing the chorus with me,” Leferink says. “That was a really awesome feeling.”

With all the success that the senior class had this year, they expect the tradition will live on. “A standard has been set and the other classes are very much aware of it because the senior class did so much bragging,” Tamayo says, adding that other classes have already responded to the challenge by indicating that they intend to surpass this year’s participation rate. “The Class of 2012 welcomes that,” Tamayo explains, “because every time the participation rate goes up, we are all winning.”