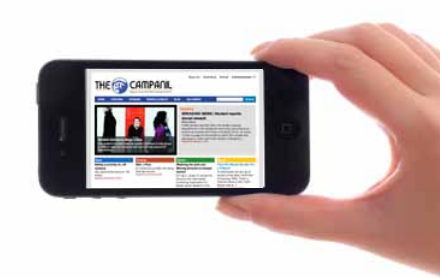 As the world of news and information evolves to embrace new technologies, campus journalists keep pace with the change.

Two years ago, while pursuing my MFA, I agreed to manage the multimedia lab for a reporting class taught by Sarah Pollock, professor of English and head of the Mills journalism program. She had found it increasingly critical to include digital media analysis in her journalism courses, and was about to launch a hands-on lab that would support students’ efforts to develop audio and video stories.

Editors on the Campanil, the student newspaper, had already begun publishing digital stories on their website, which had won an impressive second place in the statewide California College Media Association awards competition in 2005—beating out larger schools like Stanford, Cal, and UCLA. (They would place second again in 2010.) I didn’t hesitate to sign on. The multimedia add-on was such a success that we took the concept to the Associated Writing Programs conference in Washington DC a year later, presenting a panel on multimedia expression in the writing classroom.

Pollock recalls how students “used photo-sizing wheels, exacto knives, and waxers to lay out the newspaper by hand” when she arrived at Mills in 1987 and the paper was still called the Weekly. They soon graduated to using desktop publishing software, always keeping up with industry standards to produce the paper’s print edition.

By 2003, the Weekly was online, but barely. Laura Cucullu ’05 became online editor that year, bringing with her 10 years of tech support experience and a determination that everything printed in the paper should appear online. “The people who followed me at the paper grabbed that by the horns and said now we need to add in things for online only,” says Cucullu, who is now a senior editor at CNET.

Today, the Campanil’s website features slideshows, podcasts, and video stories, and staffers employ social media to keep up with breaking news. Lauren Soldano ’11 produced video coverage of the recent Occupy Oakland protests right up until the camp was cleared away. Cucullu, who followed the those protests via the Campanil’s live Twitter feed, says video and social media have become essential forms of expression for journalists. These make written stories more accessible and immediate, and can sometimes uncover bias in print journalism. “You can write a story that says one thing, but if someone’s got a video that says something else, guess what triumphs? The video,” Cucullu says.

Pollock applauds the way students are “taking intellectual experiences they’re having in the classroom and translating them using these technologies.” With her experience as a senior editor at the Oakland Tribune and Mother Jones magazine, she also pushes students to think in complex ways about how news is delivered.

As a result, whether in print, on video, or by tweet, Campanil staff continue to reflect the core mission of the journalism program, which emphasizes rigorous, ethical reporting and compelling, well-structured narratives. These new areas of expression, says Pollock, have “galvanized a level of engagement that’s critical to the students’ moving on to becoming leaders in the world.”

Journalism graduates have gone to top positions in a variety of media: Taigi Smith ’94 has been a senior producer of the CBS Evening News and 48 Hours Mystery; Tracy Clark-Flory ’06 is a staff writer about relationships, sex, and culture for Salon magazine; and Ariel Gore ’94 is the founder of the national parenting magazine, Hip Mama.

Soldano, who found camaraderie and a sense of purpose in the long hours spent producing the paper and website with fellow editors, intends to seek work with an organization that teaches underserved youth to use video to tell their stories.

Cucullu, too, feels compelled to serve the public interest. She was spurred to study journalism after seeing how little coverage the mainstream media provided when George W. Bush appointed a religiously conservative doctor of disputed qualifications to a reproductive health drugs advisory committee. “Journalists are a group of really dedicated people who believe that information needs to be out there,” says Cucullu. “And they will fight to the death to do that.”

To read the Campanil online, visit www.thecampanil.com. To receive Campanil news in your email account or on Google Reader, subscribe to its RSS feed at http://feeds.feedburner.com/TheCampanil.