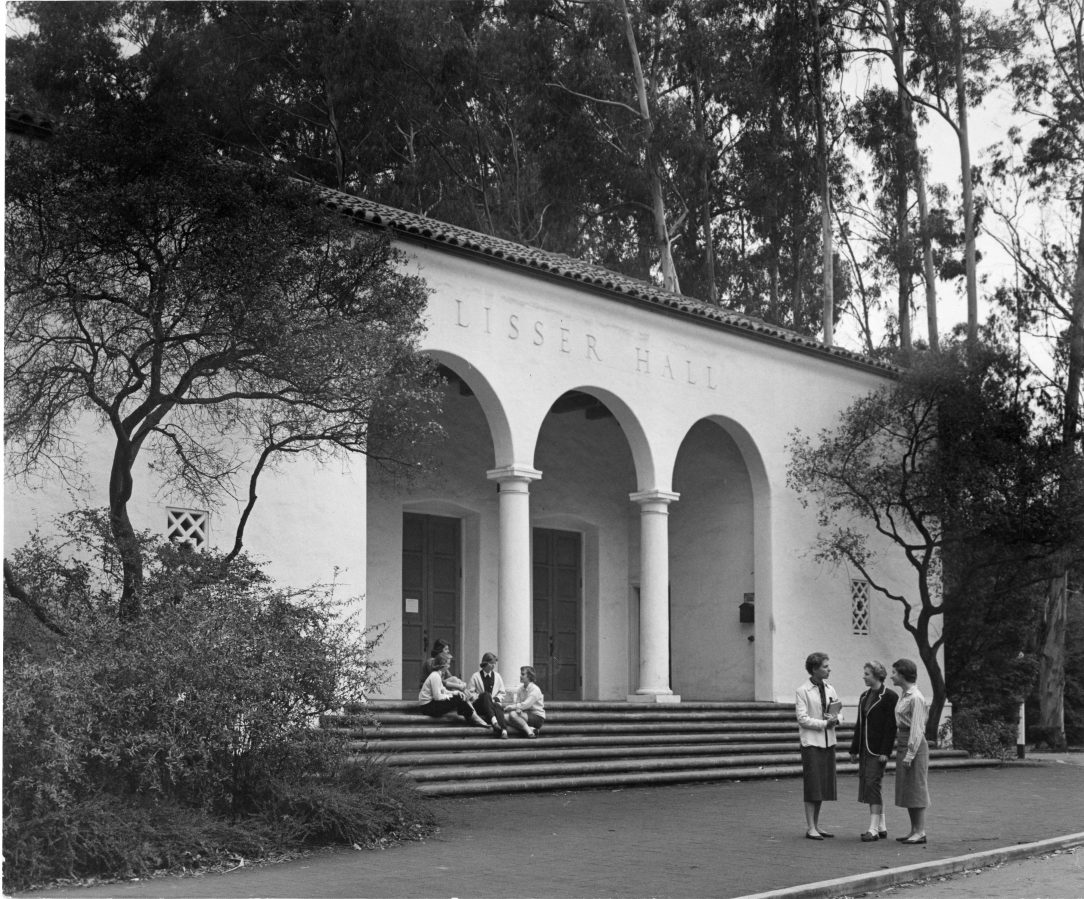 For more than a century, Lisser Hall has been a laboratory for students and faculty exploring the boundaries of live performance. The building’s rich history includes great names in theater and dance, an unusual turn, and even a ghost!

Act I: A star is born

At the turn of the century—the 20th century—Mills College was bustling with crowds seeking culture and pleasure. Under the guidance of Louis Lisser, Mills music performances became a destination for the sophisticated. Lisser, who had been something of a musical prodigy as a youth in his native Germany, immigrated to California and  became head of the music department at Mills in 1879. One of the most prominent members of the musical profession on the Pacific coast, he was thoroughly committed to the advancement of music, including through packed performances at Mills.

“The attendance at our entertainments has been so great that many could not even find standing-room,” a pamphlet of the time states, adding that a concert on May 22, 1900, attracted “an extraordinary number of interested friends, and the crowded condition of the hall offered an irresistible object-lesson, demonstrating the necessity of a large assembly room.”

Hazel Patterson ’00, a soon-to-graduate student at that crowded performance, pledged the first hundred dollars towards construction of an all-purpose college auditorium to accommodate the throngs  that smaller rooms in Mills Hall could not. “With an impetus given by the pledges of students and alumnae, the trustees immediately sought means to finance a building which might have particular value for the department of music,” wrote Rosalind Keep in her venerable book of Mills history Fourscore and Ten Years, “and then came the happy suggestion that the proposed hall bear the name of Dr. Louis Lisser…. In December 14 of 1901, Lisser Hall became a reality and was dedicated.”

The new building, designed by San Francisco-based architects G. W. Percy and Willis Polk and sited along the bank of Leona Creek, was designed in a muted classical Greek revival style, with fluted Ionic columns. Like Mills Hall, it faced towards Seminary Avenue and Wetmore Gate, the original approach to campus. “It is a simple, dignified structure, without doubt the handsomest concert hall in California,” says the White and Gold of 1901. “The interior decoration is ivory and gold; light, beauty, and comfort with the prime considerations in its construction.” The 1,000-seat hall’s auditorium contained a flat floor with a slightly raised stage; a full pipe organ, choral space, and piano practice rooms made it a versatile space for musical recitals, dance performances, and theatrical productions both dramatic and humorous, as well as for religious services, rhetoricals, receptions, and commencement exercises.

Soon enough, the needs of the growing College demanded alterations to Lisser Hall. By 1919, the auditorium’s simple platform was upgraded to a “modern” stage, with rooms for scenery, costumes, and makeup to accommodate the recently established Drama Department. An annex of classrooms and offices was added in 1938; by 1940, fixed plush red seating had been installed.

But the most significant change came in the late 1920s. With the automobile becoming the dominant force in transportation, the main entry point to campus shifted to Beulah Road (now Richards Road). The Music Building, completed in 1928, and other new structures oriented towards this thoroughfare—and Lisser seemed decidedly incongruous.

Students lamented in the Mills Weekly of March 14, 1928: “Classes for several years have wished they could pick up Lisser Hall and turn it around to face Beulah Road instead of kicking its heels in child-like glee and turning its back on all comers to campus…. Lisser must be taught better manners. It must look the students frankly in the face and make its bow to the public at the proper angle.”

Campus planners agreed. They further hoped to unify the architecture of college buildings in a Spanish colonial revival style. Walter Ratcliff, master architect for the College, not only remodeled the exterior with a classically columned north-facing entry and red tile roof, he also reversed all interior functions.

“If you walk along the creek side of the building, you can still see the original style,” says Jim Graham, a College employee for more than 40 years and technical director and manager of Lisser since 2002. “The rest of the building was stuccoed over to match the other buildings on campus. Lisser reflects not only the history of the College, but the history of Oakland and the coming of urbanization in the early 20th century.”

Graham may know Lisser Hall more intimately than anyone: he has been behind the scenes for more than half of the building’s lifespan. The son of dance Professor Eleanor Lauer, MA ’40, Graham literally grew up on campus. “My earliest connection to Lisser, at least that I can remember, was leading a procession of dancers from the back of the hall to the stage, carrying a large abstract sphere made of brass tubing, probably four feet in diameter,” he says. “This would have been in the late 1950s. The dance was in 17th-century style, and we were dressed more or less as court jesters. Alas, I have no memory of what happened after we got the sphere and the dancers to the stage. After all, I was about nine.” Graham made himself useful as a page turner for Professor Doris Dennison as she provided live piano accompaniment for dance performances and later, as a teenager, operated the stage’s hand-drawn curtain.

“For three or four years I did that, standing between the lighting dimmer boards and the fuse box, wedged into a small space downstage right that, when the dimmers started heating up, took on a quality of Death Valley on a July afternoon,” he says. “The curtain hung on an old wooden track and was pulled with thick cotton ropes. It took a fair amount of strength to pull so, between the energy needed and the climate where I was working, I came out of concerts drenched in sweat.”

Graham claims no knowledge, however, of a ghost long rumored to haunt the building. An article originally published in the Mills Stream newspaper (and reprinted in the February 1976 issue of Mills Quarterly) details the purported paranormal experiences of several students, alumnae, and faculty members who have heard eerie footsteps and unexplained knocking or felt unusual gusts of cold wind—usually while working alone late at night. Many claim that the restless spirit is Susan Tolman Mills, co-founder of Mills College, under whose presidency the building was erected. Mills and Louis Lisser reportedly disagreed about the future of the College: Lisser dreamed of turning it into a music conservatory, while Mills was unwavering in her commitment to the ideal of a liberal arts college for women. And when Mills died in 1912, her funeral ceremony was held in the auditorium, where the body lay in state.

“Seven or eight years ago, I was leaving after a rehearsal and heard odd noises from the attic,” Graham admits. “It wasn’t Susan Mills. We later realized it was a raccoon that had gotten trapped in the attic.”

The mortal occupants of the building have remained varied and noteworthy. In addition to student performers and stellar artists such as dancer Marian Van Tuyl and composer John Cage, the hall has hosted political speakers, comedians, and others from outside the gates. And, bit by bit, Lisser’s physical structure continued to evolve. The last major renovation was done in the early 1970s, when a balcony was remade into the studio rehearsal theater above the lobby.

“Lisser now had two performance spaces, which served the Drama Department for the rest of the 20th century,” says Graham.

Act IV: Back to the future

Today, despite its central location and the great demand for a mid-sized performance space on campus, beautiful and historic Lisser Hall is dramatically underutilized. After 114 years, its technological and functional limitations simply cannot meet the demands of students and faculty in a variety of fields. With these needs in mind, plans are afoot for a major renovation that will make the hall a hub for interdisciplinary creativity and revive the geographic heart of the College.

“A renovated Lisser Hall would allow students to experiment with what’s possible on stage,” says choreographer and professor Molissa Fenley ’75, who speaks eloquently about the role of physical studies, and dance in particular, as an essential element of a liberal arts education. “The body is the one thing that we have in common with other humans throughout time. Dance connects your personal history with the history of the world; at the same time, it’s intellectual—physical sciences, philosophy, and the arts are all intertwined.”

Victor Talmadge, director of the newly revived theater studies program, makes a similar point. “We are increasingly becoming a two-dimensional society. In film and television, we are exposed only to someone’s else’s vision,” he says. “The interaction between audience and performer in live theater is an immediate, three-dimensional way of storytelling in which we are co-contributors to an unfolding experience. It stimulates the imagination in a way other art forms can’t.”

The proposed renovation would alter the building’s form and function to provide a proper performing space for dance, theater studies, and other uses. An expanded lobby, equipped for use as a multimedia exhibition space, would open onto a new terrace overlooking Leona Creek. The auditorium would return to its original format: a flat floor with a raised stage. With sprung floors, modular seating, and technical upgrades including Internet-enabled audiovisual equipment, the space would be capable of hosting a range of events, from traditional dance and theater to interactive multimedia events and co-located conferences to career fairs and community festivals. The upstairs rehearsal space would be transformed into a digital performance theater.

Although completion of this project—and even the beginning—is still in the future, a portion of the estimated $7-million project cost has been secured from the Valley Foundation and several major donors. These supporters, like many on campus, are excited by the potential of having a specifically interdisciplinary space and of bringing students and the greater community together to continue the artistic, intellectual, social, and recreational traditions of Lisser Hall.

Not surprisingly, Jim Graham and his expertise will be part of Lisser Hall’s next stage. “I am excited to be part of the team planning the renovations to come,” says Graham. “In many ways, these changes could return Lisser to the original concept of a multipurpose space that Susan Mills and Louis Lisser had in mind at the turn of the 20th century.”