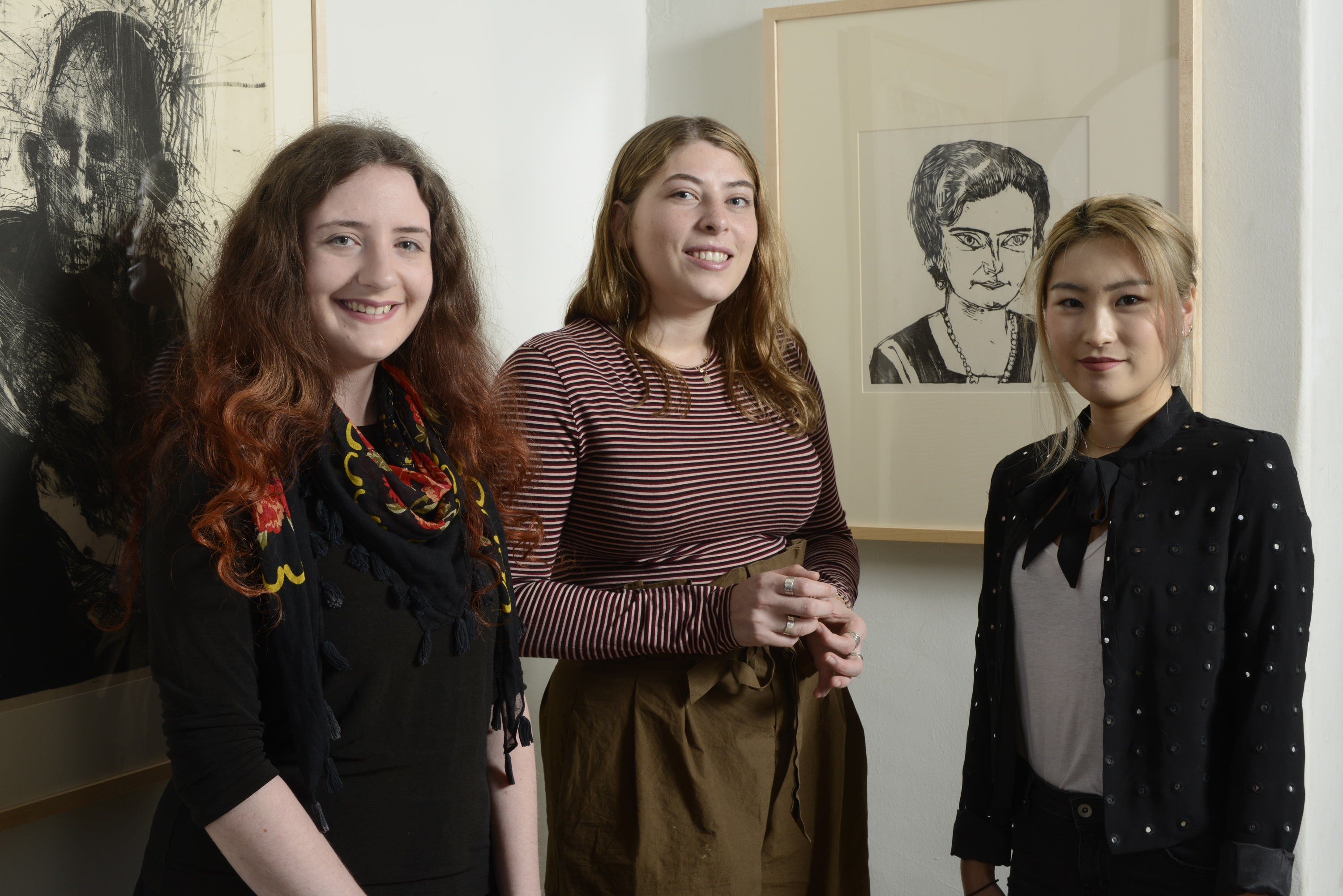 Lessons from an exhibition

In developing a museum exhibition based on German Expressionist art, five student curators discovered how artistic voices not only reflect the time and place of their making, but also echo the past and offer perspective on the present.

What happens when current art history students are directed to curate an exhibition at the Mills College Art Museum? For five Mills women in the museum studies workshop course last fall, the result was Anxious States: Expressionism from Gauguin to Oliveira, a modest yet powerful show that, as Museum Director Stephanie Hanor writes in the introduction to the exhibition catalog, “can be read as political as well as emotional reactions to a rapidly changing world.”

One purpose of the exercise was to investigate how artistic voices resonate across time, serving not only to reflect the time and place of their making, but also to echo the past and offer perspective on the present. In addition, the student curators unearthed complex layers of international art movements—including Mills’ illustrious history in supporting artists before, during, and after the World Wars—as they worked through the process of developing a historical exhibition.

As their canvas, they used the powerful Expressionist movement, which originated in Germany during the years leading up to World War I. This was a tumultuous period when the country was economically and technologically strong, but driven by nationalism and led by an autocratic government. The resulting social frictions became extreme situations for artists to grapple with and comment upon. Their artwork pushed aesthetic boundaries to express powerful emotions and psychological conditions; it was considered controversial and brought charges of “degenerate art” from the Nazi regime.

Hanor started the students with a handful of prints pulled from the museum’s collection, then tasked them with developing a theme, selecting complementary pieces, creating a catalog, and mounting the show by the end of the fall semester—a lightning-quick turnaround in standard museum scheduling. “I asked the students to consider what questions from these works are still relevant today,” says Hanor. “In the process, they would learn how to make informed decisions about the content of the exhibition, research the work and artists, and understand how installation choices can impact the narrative that is being conveyed.”  She stresses that, in creating Anxious States, the students chose not to limit themselves to the most recognized artists or a strict chronology, but rather to explore the constant theme of unrest.

Each of the students came to the project with different amounts of knowledge and interest, and each found lines of inquiry relevant to their own focus in art history, from the 14th century to today. “I focus on the Renaissance, but it was really helpful to look at Expressionism,” says Hisaka Marubayashi, who found parallels in technique and theme in a 16th-century Albrecht Dürer etching, The Last Judgment, and a 1923 version by the fascinating but lesser known artist Lovis Corinth. By comparing prints from different time periods, Marubayashi noted that “the relevance of Christianity in the art world has not changed over time, even if the style and representation has been altered.”

Savanna Ames, who has a particular interest in public policy and issues of freedom of expression, was impressed with the fearlessness of the Expressionist artists in addressing political themes. “Modern anxieties, such as humanity’s disconnect with the natural world and spirituality; the increase of industrialization; and the many wars that shook the world inspired the Expressionist artists,” she says. “This exhibition intends to inform the many changes, not always for the better, that these artists portrayed in their work, and the importance of learning from their experiences in order to reflect on our current changes and how those may impact our future.”

For Eva Goldstein-Moore, biographical information helped bring the art to life. “Looking into each artist’s personal life in order to understand their art was illuminating,” she says. She discovered that many Expressionists focused on the social isolation resulting from increased urbanization, technological change, mass culture, and totalitarian systems that encouraged conformity. In combing through the museum’s holdings, however, she found the same emotional anguish expressed by artists working both before and after the Expressionist period.

“Man and Child by Nathan Oliveira, 1957 (at left), and La Loca by Jose Clemente Orozco, 1944 (below), showcase the same emotional distress as German Expressionist works, as does a self-portrait made by Edvard Munch during his time in an institution recovering from a nervous breakdown,” she says. “These dark themes  fascinated me. These artists lived during different eras in different locations, but each use art to express inner despair. Their works are both incredibly personal and universally understandable.”

Natasha Culbreth reiterates that idea. “Visual art can transcend the human boundaries of time, culture, and language and communicate with us on a more instinctual and emotional level.” She sees history repeating itself in the uneasy cultural effects of technology. “Although we celebrate technology, many of us today are uncomfortable with how it’s impacting our society and detaching us from the real world. The German Expressionists were anxious about industrialization and how it was similarly distancing people from the natural world.”

Carmen Wiley was struck by Gauguin’s problematic depiction of women. “He projected his ideals of a ‘simple life’ onto indigenous women,” she says. “In Manao Tupapau, the female subject isn’t portrayed as an individual or even as a person. She’s more of an object, a symbol, or an idea.” It’s not a stretch to see how this history of objectification set the stage for the current #MeToo movement.

For Wiley, Kathe Kollwitz, the only female artist in the exhibition, offers a more humane perspective. The Mills student was fascinated to learn that the artist’s family was unusually supportive of her art career; and that her husband ran a hospital, giving her firsthand experience of the ravages of war and cementing her stance as a pacifist. Kollwitz’s 1919 lithograph, Widows and Orphans, grimly reflects the pain of an estimated 3 to 4 million women widowed during World War I. “That has a lot to do with her identity as a female artist,” Wiley says. “I don’t think that news media, legal records, or military records are able to have this same effect. They are more rational and sometimes gloss over the fact that a ‘casualty’ is a human life.”

In the process of curating a show like this, Hanor says, “students learn how museums shape our understanding of not only art but history and our contemporary perspectives.” Anxious States is sobering reminder that conflict is more perpetual than we care to admit, and that the museum is a place to engage in important conversations.

“Looking at the history of tragic events—and the fact that they are so often repeated—makes me concerned that future generations will be facing the same kinds of tragedy,” says Wiley. “So many of the issues that these artists were wrestling with are still very present. Yet art is a constant, enduring means to process our complex, chaotic world, and the museum can be a place to engage in important conversations.” She adds: “I hope the exhibition will prompt people to think about how we can work to avoid these traumas in the future.”

Many of the works featured in Anxious States entered the museum’s collection courtesy of one man: Alfred Neumeyer, director of the Mills College Art Museum from 1935 to 1950. Neumeyer taught art history and pioneered museum studies classes, utilizing the museum’s collection as a dynamic archive and teaching tool, and encouraging students to use the museum as a stage for research and presenta­tion (as with the Anxious States exhibition).

Neumeyer, a Munich-born scholar, poet, and novelist, came to Mills from the University of Berlin to escape the ominously shifting political tides in Germany. He brought direct knowledge of the art and artists working in Europe at that tumultuous, creatively vibrant period between the World Wars and went on to become a bridge between Oakland and a vast community of international artists.

Under Neumeyer’s leadership, the museum was the site for Lyonel Feininger’s first U.S. exhibition (in 1936), and subsequently presented major exhibitions by Fernand Leger, László Moholy-Nagy and the Bauhaus, and Max Beckmann.

Neumeyer invited many of these artists to teach at Mills during the Summer Sessions—classes that drew some of the most creative and avant-garde personalities in art, music, and dance to the campus in the 1930s and ’40s. His émigré status gave him a more urgent impetus to extend such offers: teaching contracts allowed these artists to secure travel visas and get out of war-torn countries, at least briefly.

Many of the works in the current show were made during the artists’ summer visits to Mills. “As part of the summer sessions, the artists were offered a solo exhibition in the museum and taught co-ed courses during the summer,” says current museum director Stephanie Hanor.  “The College made a point of supporting artists not only through showing their work, but also by collecting it. Of the works we have by those artists, some were given, but quite a few were purchased for the collection.”

Neumeyer also taught at the University of California at Berkeley, Stanford, and Harvard University, and received Fulbright, Guggenheim, and Ford fellowships, frequently going abroad to write and teach. In his 1964 book, The Search for Meaning in Modern Art, he wrote this about art and the human experience: The man who has never had doubts about the art of his age is to be pitied, but he who has never been able to relive it is not aware of the pulse of his time.”