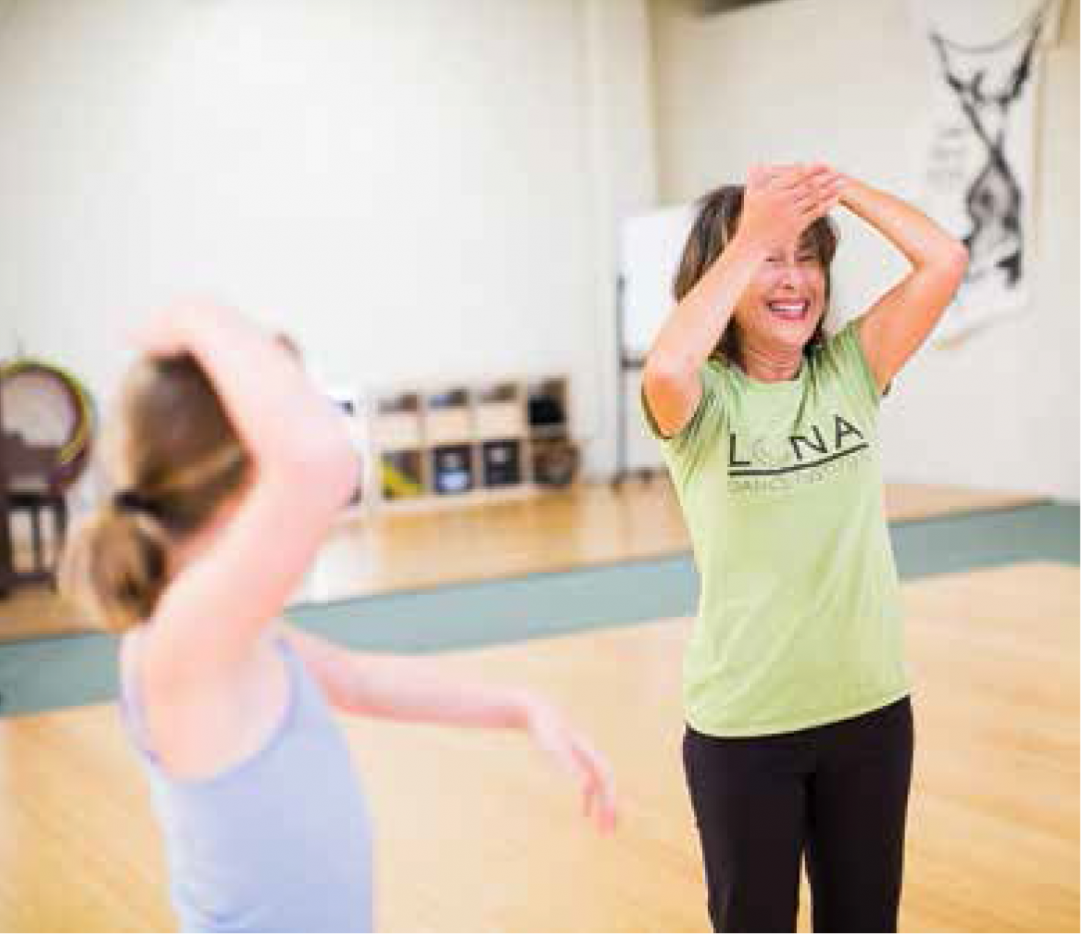 Learning to dance, dancing to learn

The founders of Luna Dance Institute foster creativity, confidence, and community through dance training based in theories of child development.

As a young choreographer, Patricia Reedy ’80, MA ’00, instructed her siblings to move in coordinated patterns across the multicolored checkerboard tiles in the basement of her childhood home. She was destined for a life in dance but, growing up in a family that emphasized progressive values, she also understood the importance of community, service, and compassion.

Nancy Ng, MFA ’92, believes that movement is one of humankind’s oldest forms of communication, and that dance can be a powerful way to connect with the world around us, with each other, and with ourselves.

Both women found their way to the dance program at Mills, where they met in 1990. Ng, who had studied ballet as a child and performed with her high school drill team, arrived after a stint teaching kindergarten—a vocation that she says “wasn’t really feeding my soul.” Reedy had become increasingly frustrated with how dance was taught in public schools and sought to integrate concepts of child development into dance instruction.

As Reedy and Ng chatted between classes and rehearsals in the basement of Haas Pavilion, they soon realized that their mutual interests included more than just dance. With shared backgrounds in childhood education and choreography—and a dedication to advancing social justice—both wanted to use dance to improve the well-being and creative lives of children, particularly those in underserved communities. Indeed, a growing body of evidence suggests that teaching creative movement and dance not only improves children’s physical development, but also bolsters their social competence and academic achievement as well.

So, in 1992, after changing her degree focus from dance to early childhood education, Reedy asked Ng to join her in launching Luna Kids, a nonprofit organization to offer teacher training in dance and to create a dance curriculum that aligns with how children’s bodies and brains move and learn. Together, they base their teaching on a foundation of children’s social-emotional, cognitive, and physical development, as well as attachment theory and other educational research.

In the 25 years since then, Luna Kids has evolved into Luna Dance Institute and moved into a 4,000-square-foot community-based dance center in West Berkeley, while Reedy and Ng continue to champion the cause of bringing dance to all.

Rather than dwelling on particular dance steps, their approach emphasizes learning to move and improvise. Class leaders supply prompts that allow dancers to experiment with space, movement, and emotion, and then choreograph their movements into a sequenced dance of their own design.

“Dance is about creation and the freedom that can bring to anyone willing to try it,” says Ng, who was co-director of San Francisco’s Asian American Dance Performances before joining Luna. “Creative thinking, problem solving, personal expression, and student-directed learning are at the heart of every one of our classes.”

The pair also explicitly question the underlying privilege and bias within the dance world, noting that low-income communities are least likely to have access to dance opportunities. Partnerships with classroom teachers, social workers, and arts leaders allow them to reach many children who are most in need, including students in low-performing schools and those with disabilities. Reedy and Ng have worked with the Oakland Unified School District to develop a full K–12 course of study and pioneered dance-inclusion programs for elementary and middle school kids with special needs. In order to create sustainable, ongoing programs, they provide training for social service providers and public school staff in effective use of dance in a number of different settings.

“Dance connects a child’s brain, body, and heart,” says Reedy. “It’s the only art that intentionally uses all three.” She and Ng have seen their programs transform young people’s confidence by giving them not only a new way to express themselves, but also an opportunity to be seen.

Ng and Reedy share another core belief: that dance can be a powerful tool for strengthening personal relationships and building community. This idea is most notably put into practice through the MPACT program (Moving Parents and Children Together). Originally developed in 2001 to aid families reuniting after a court-mandated separation, MPACT provides free parent-child classes that enable participants to experience their relationship in new ways through movement, deepening empathy, trust, and connection. MPACT classes, which often happen at libraries and community centers, now serve more than 300 families each year who are divided by substance abuse, domestic violence, and immigration; partner organizations include recovery programs and social service agencies throughout the Bay Area. The program has received funding support from First 5 of Alameda County and was selected as a 2015 finalist in the President’s Committee on the Arts and Humanities Youth Program Award.

Luna’s programs now reach more than 20,000 students each year, but the organization’s founders are equally committed to spreading the gospel of dance through professional training and pedagogy. “We feel a deep responsibility to cultivate the next generation of leaders in dance education and to cultivate within them our core values of universal access and experiential learning,” says Reedy.

Reedy herself was motivated to become a teacher, in part, in order to increase the effect of her efforts. “I could have more impact teaching 300 kids in one year than making 50 dances in one lifetime,” says Reedy, who was named Outstanding Educator in 2008 by the National Dance Education Organization.

Luna also offers extensive consultation, workshops, and support for teaching artists in every phase of their careers. The simultaneous emphasis on dance education and early childhood development is also apparent in their continued deep ties to Mills. In addition to the two founders, Luna counts five other Mills alumnae on its staff: Jochelle Pereña, MFA ’11, Carmen Roman, MFA ’13, Nia Womack-Freeman ’96, Heather Stockton ’13, and Aiano Nakagawa ’15. Students seeking to further their academic studies in both education and dance often find themselves referred to Mills.

“The Mills Dance Department instills in its students a hunger for learning and for making a difference in the community,” Reedy says.

And the pair were deeply involved in advocacy efforts that led to the unanimous passage of the Theater and Dance Act (TADA!) in the California legislature last September. The act reinstates single-subject teaching credentials in dance and theater which, since 1970, had required credentials in physical education and English, respectively. With this obstacle removed, Ng believes that the state will see a significant increase in dance classes in the public school system.

Reedy says that, regardless of the style or genre of movement, dance can be transformative for any body of any age or ability. “When the body, spirit, and mind are all in flow, you become one with time, space, energy, and higher purpose,” she says. “This is the thing that I want for all children.”