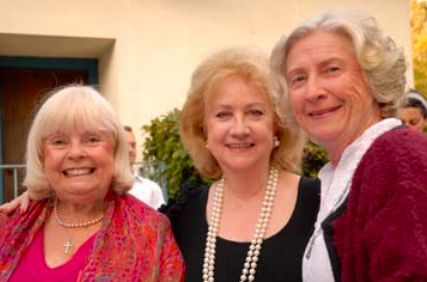 In fall 1957, Ravenna Helson, an adjunct professor of psychology at the University of California, Berkeley, visited Mills College armed with a battery of questionnaires, inventories, and assessments. Her goal: to select a representative sample of the Class of 1958 to participate in a long-term study on “creativity, leadership, and plans for the future in modern young women.” The study would enable researchers to investigate changes in personality and gender roles over time, against the complex backdrop of historical and social change.

Just over 50 years later, on September 18, 2008, a lively group of Mills women from the Class of 1958 gathered during Reunion to hear a presentation by Helson, who has tracked the class through significant life changes. Helson’s research team, now headed by Berkeley Professor of Psychology Oliver John, followed up with the Class of 1958 sample and another group from the Class of 1960 a few years after their graduations and again at periodic intervals spanning five decades.

“When we entered into the study, I don’t think that we knew it would be this long,” laughs Margi Roberts Tomczak ’58, who introduced Helson that afternoon. One of the recent areas of study has been the concept of integrity, which psychologist Erik Erikson describes as the acceptance of one’s past as inevitable and meaningful and which Helson terms “the last major task of adulthood.” The study has revealed that integrity may not simply be a matter of acceptance, but that there is also an active component of “making yourself the person you want to be, or finding your authentic self.”

Many study participants reported feeling freer in their 60s and 70s to pursue creative work that they had been unable to commit to earlier in life, due to employment, health concerns, life events, or social expectations. Satisfaction with relationships tended to increase, and even losses and late-life regrets could be a source of strength and integrity.

“We are truly more our real selves—more at ease with who we are, and more accepting of ourselves and each other,” says Cynthia Foskett Nestle ’58. “I sensed it in many of the classmates I reconnected with at Reunion.”

Simply participating in the study imparted a sense of perspective. “I’ve looked forward to sitting down and reflecting on where I’ve been and where I’m going,” says Mary Stuart McCullough ’58.

Nestle also notes the broader historical context of her class-mates’ lives: “I have come to see our class as part of a ‘bridge generation’ caught between the traditional roles for women and the radically changed roles that emerged in the ’60s and ’70s.”

I have come to see our class as part of a ‘bridge generation’ caught between the traditional roles for women and the radically changed roles that emerged in the ’60s and ’70s.

“The idea of ‘integrity’ as a final thrust in life is compelling and true,” according to Marilyn Winans ’58. “I see the strengths that have been developing during my journey. I notice how they relate to my past, and how that has shaped what I have done these 50 years after graduation. I am looking at what I need to do now to truly have a life of integrity.”

The findings of the Mills Longitudinal Study have resulted in more than 100 scholarly publications on personality, emotional experience, relationships, and life satisfaction. Details can be found at the project website, millslab.berkeley.edu.

Even as our society changes with respect to gender roles and attitudes toward aging, so too does this dynamic group of Mills alumnae continue to change, learn, and grow—and show alumnae across the age spectrum how we, too, can approach each decade with grace and integrity