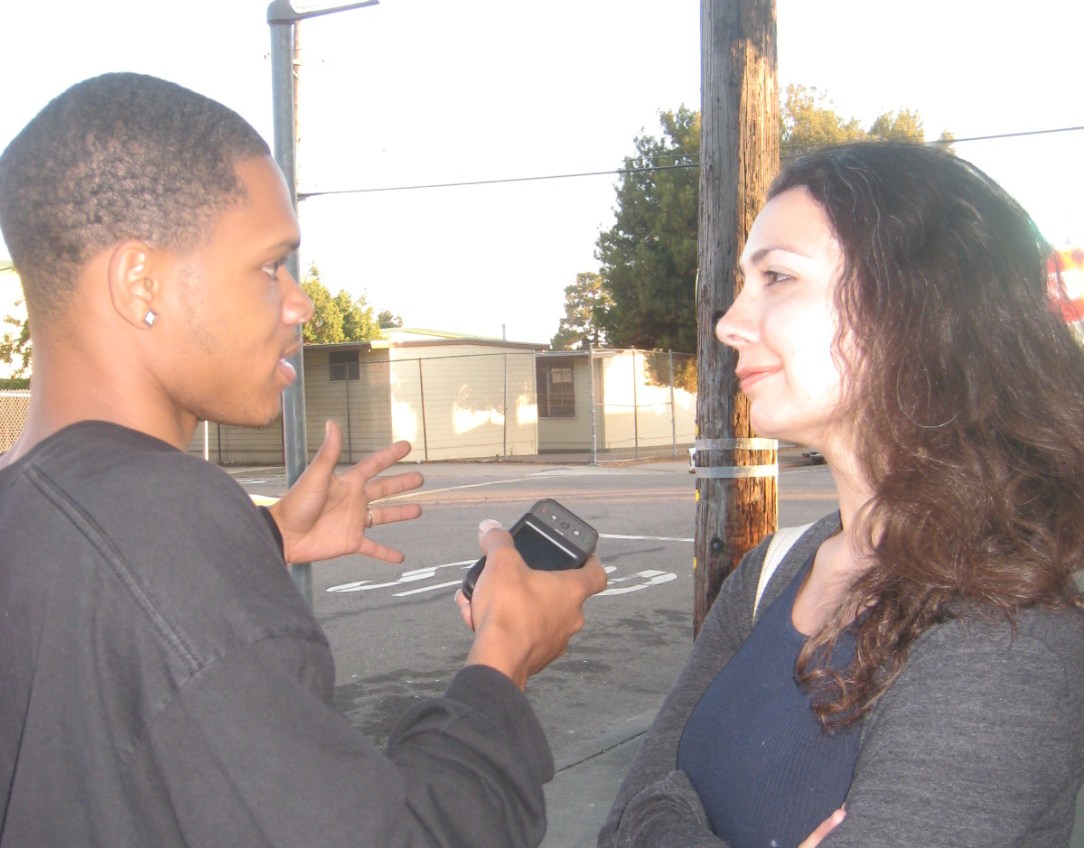 I’m driving through miles of cornfields, across the state of Iowa. Out the car window, silos and smokestacks rise up to break the flatness of the land. I’m going to meet the news director of Iowa Public Radio. It’s an amazing opportunity, a chance to interview for a job as a reporter at one of the best public radio stations in the country. It is a long way from the sunshine of Oakland and the rolling green of Toyon Meadow, but the journey that brought me here started at Mills.

It was 2007 when I stumbled into the public radio reporting class led by Holly Kernan. I thought it would be a lark—I loved public radio, so why not? What I didn’t know was that this class would literally change my life. Mills public radio showed me a world that married social justice and public interest reporting with the art of storytelling. It introduced me to the work of being in the world, rather than just studying it. It also gave me a path, a journey, and now a future. Before I stepped into that classroom I had no idea what I wanted to do with my life. Now, just a few years later, I have earned a degree from Columbia University’s Graduate School of Journalism and am on my way to a career.

Kernan’s class is not just a window on the world, it is a push out the door. At the heart of the reporting classes is a focus on “organic reporting,” where the stories bubble up from the community. We learned that if you spend enough time with people and genuinely listen to their concerns and ideas, the stories will emerge. It’s the opposite of helicopter reporting, in which issues are seen from a distance, with little detail. One of the toughest first assignments was to call an expert and interview them. It was empowering to master this skill and learn that you have permission to ask questions. Later, Kernan sent us to the field to talk to people and uncover their complex realities, and she gave us the tools to tell their stories.

In the spring of 2007 our documentary class set out to explore Oakland’s public schools. There were so many experiments in education happening across the city: from small schools to new budgeting to revamped vocational education. Our eight-person editorial team (otherwise known as “our class”) wrote research papers and invited guest speakers to explain complex ideas like the intricate financing system in the state. And then we fanned out all over the city to spend time in Oakland schools.

I realized that I had passed the point of no return when I was interviewing a young woman named Talice at Castlemont High School. Despite her high academic achievement, she was on the verge of dropping out in her senior year. Within minutes of pointing the recorder her way, her whole story tumbled out: Her mom was sick and could barely support the family; Talice had no money to attend prom and little hope for her future. She hadn’t told anyone this before, hadn’t been able to cry about it, but somehow a stranger with a microphone asking for her story gave her a moment of catharsis. It gave me something too—an understanding of the power of radio journalism.

The best radio stories revolve around sound-rich scenes and use lean, descriptive prose so that listeners can create pictures and be transported to places they otherwise might not go. These stories are intimate and people-centered. In our reporting on Oakland schools, we learned to explain policy by telling smaller stories that together give you a bigger picture.

It was an extraordinary experience creating the final project, a documentary of eight stories we called The Drop Out Dilemma that was aired on Bay Area public radio station KALW. And it was a great honor to receive acclaim for our work. The Drop Out Dilemma won the national Sigma Delta Chi award for radio documentary reporting from the Society of Professional Journalists, the first time that students had ever won this award. We attended a ceremony in New York to receive two Gracie Awards from American Women in Radio and Television. The Drop Out Dilemma was also honored by the National Education Writers Association and the Radio Television Digital News Association, which gave us a Regional Edward R. Murrow Award.

I took the next step in my reporting career when Kernan arranged a paid summer reporting fellowship for myself and classmate Sarah Gonzalez ’09. The assignment: spend time on the ground in East Oakland, with a focus on connecting with young people.

The homicide rate in this area is often a national news story, but most of the coverage is superficial. Working in partnership with KALW News and teenagers from the local nonprofit Youth UpRising, we spoke with elders and community leaders, with gun runners, ex-cons and police officers, with teachers and preachers about what they thought was causing—and what might be the solutions to—the violence scarring lives in East Oakland.

The resulting six-part series, Fault Lines: Community Solutions to Violence, explored police-community relations from the point of view of young people who allege widespread and haphazard brutality from local officers. It featured a profile of one of the new “problem-solving officers” trying to improve strained historic relations in Oakland; an inside look at the illegal gun trade; and a compelling portrait of the complex street economy through which many neighbors earn their living. We facilitated conversations between young people and police officers, allowing individuals who might not otherwise speak to each other a chance to communicate honestly. The understanding that resulted from these dialogues reaffirmed for me the power of in-depth public interest reporting.

That’s why I’m thinking of Mills as I drive through Iowa, preparing for my big interview. The interviewer asks me about the most valuable things I learned from my first news director. I reply that, above all, everyone has a story to tell and, if I work hard, I can do anything I put my mind to. Mills taught me this.

The public radio reporting class at Mills provided practical hands-on experience, but the extra attention and relentless expectations of Holly Kernan meant we learned much more than new skills. She presumed us to be brilliant radio journalists, so how could we fail? The answer was simple: we didn’t. We rose to the challenge, and each one of us is better for it.

Q & A with Holly Kernan, lecturer in public radio

Q: How did the public radio classes come about?

Thanks to Professor of Journalism Sarah Pollock and Vice Provost Andy Workman, we launched the public radio courses in 2006. They are now part of the popular journalism minor at Mills. The classes teach students the principles of public interest journalism and give them a chance to connect to the larger Oakland communities.

Q: What classes are offered?

The introductory class teaches the basics of radio reporting and production: students write non-fiction narratives and do field production. Each produces a story about Oakland during the semester. They learn to ask probing questions, about research and fact-checking, and to employ different writing styles for different purposes. In addition, the course allows students to make mistakes and take risks, to follow their curiosity and—this is especially key—to find new voices, including their own.

The intermediate class challenges students to delve into big public policy issues and digest them for a broad audience. In 13 weeks these students create a professional documentary series, presenting evidence and multiple perspectives to communicate with an audience of non-experts. Every year, the class is different. Sometimes we focus on a topic, sometimes a geographic area. Our methodology is the thread: find under-reported stories, tell them in depth, ground them in research and context.

Q: What technical resources are available to Mills’ radio students?

In the early years, students would narrate their final stories, talking into a recorder in my car in the quietest place on campus. It’s an old radio field trick. I’m happy to say we now have an edit booth in my office in Mills Hall and a small radio lab; advanced students also use the KALW studios.

If students want to hone technical skills, we find internship opportunities for them to do that. We also provide one-on-one tutoring for those who want to practice mixing in the lab.

Q: You serve as news director at radio station KALW and are also a lecturer in the Graduate School of Journalism at UC Berkeley. How does your professional standing augment your teaching at Mills?

My professional connections allow me to expect broadcast quality from these students. That expectation, coupled the highest editorial standards, has provided the formula for the public radio project. I ask students to explore the changes facing society—and they respond by creating work that many professionals admire.

At KALW, we work with student reporters at UC Berkeley, Youth Radio in Oakland, and the San Francisco School District. Our entire newsroom is dedicated to mentoring young journalists, so the partnership with Mills was a perfect fit.

About 100 Mills women have been through the public radio courses, many as part of the journalism minor. They’ve all shown an incredible work ethic and creativity. Sarah Gonzalez ’09 recently completed National Public Radio’s coveted Kroc Fellowship and went on to report for NPR’s StateImpact project in Florida. Lindsey Lee Keel ’11 is now producing for NPR’s Snap Judgment. Thea Chroman ’07 is working on her master’s—in preparation for a PhD—at the University of Oregon and has been asked to create a similar public radio course at that institution.

These new voices are already a valuable addition to the airwaves.