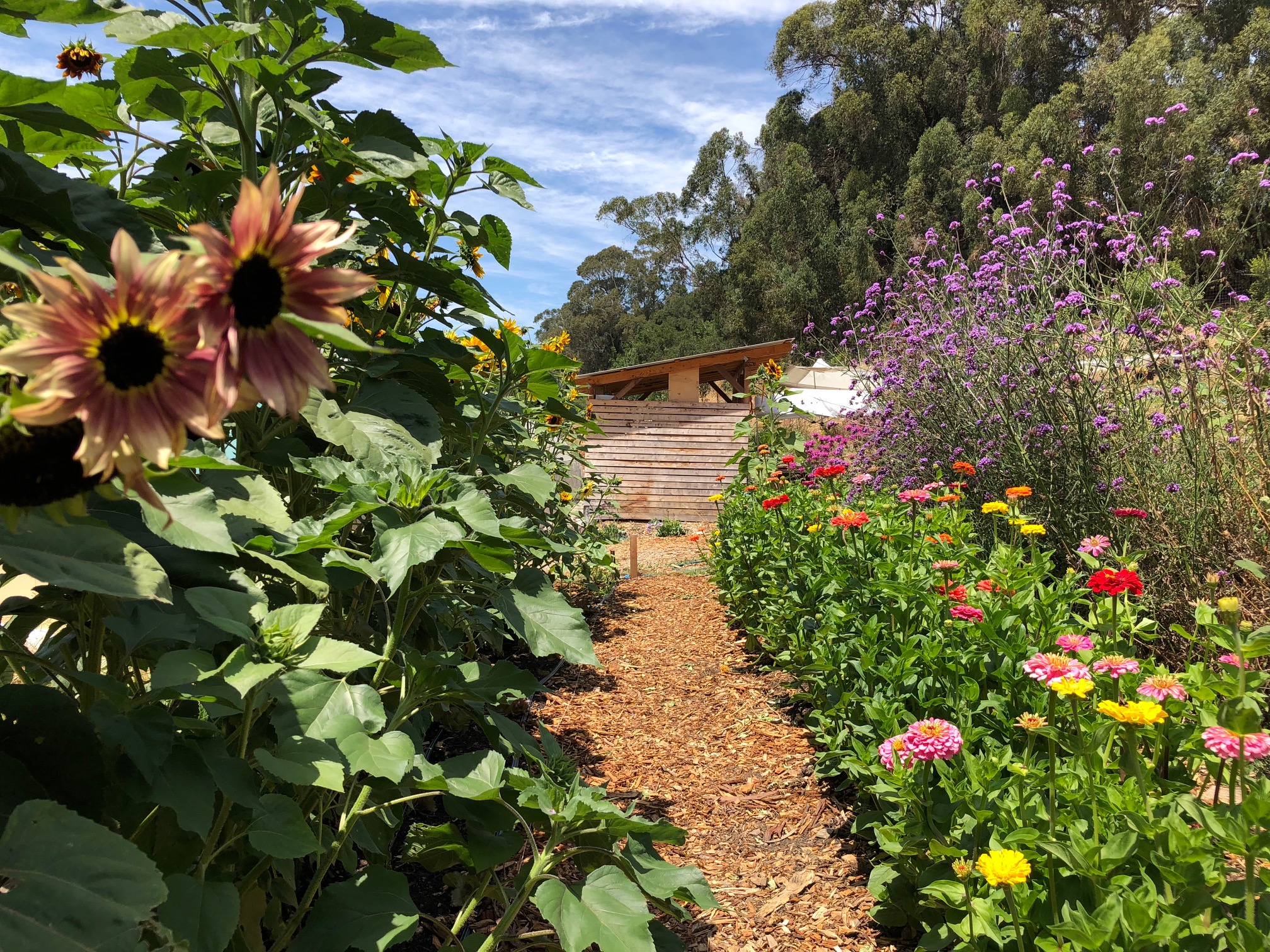 The Mills Community Farm gives students the chance to get their hands dirty while learning how to grow their own food–and about larger issues of inequality.

On a sunny slope near Richards Gate, a cornucopia spreads across two acres of campus. Collards and kales, chards and beets grow in neatly mulched rows. A soft hum emanates from honeybee hives, while scents of lemon verbena and sage waft up from herb beds. Tomatoes, peppers, eggplants, and more will ripen in the summer alongside flowers blooming in every hue. In a couple more years, a terraced orchard of young trees will yield apples, citrus, stone fruit, and other treats.

But the most important growth nurtured at the Mills Community Farm is human. “The farm serves as an outdoor laboratory where Mills students can come together and exchange ideas about issues like food justice, find solutions, and make their own connections to the land,” says farm manager Julia Dashe, who came to Mills in 2018 after founding and directing a certificate program in sustainable urban agriculture at San Diego City College. “For most of the students working here, it’s the first time they’ve ever farmed.”

Every Wednesday, 25 students gather under the canopy of a majestic oak tree for Dashe’s farm practicum class, sitting on hay bales as she explains organic farming methods such as permaculture and French intensive gardening. They discuss the relationship of farming to the issues of environmental sustainability and the effect of race and class on people’s access to food.

“Students are excited about growing food for the community,” Dashe observes. “And they’re really interested in social justice and how that relates to food.” Together with a dozen paid student workers, Dashe and her class handle all the farm chores, from composting to transplanting to harvesting. They sell produce and flowers to the community at a farm stand outside the Tea Shop each Thursday. They also sell vegetables directly to Bon Appetit—the company that runs the College’s dining halls—and neighborhood eateries Communitē Table and Sequoia Diner. Unsold produce goes to the Mills Pantry, which provides free food to students in need.

Mills borders an area of East Oakland where supermarkets are scarce and fresh produce is in short supply. Yet this land produced food for centuries: The native Ohlone people would periodically set fires in the meadows here to encourage the growth of grasses that attracted game, such as elk and deer. Spanish colonizers brought longhorn cattle to nearby meadows, which they incorporated into the East Bay’s vast Rancho San Antonio. After College namesakes Cyrus and Susan Mills purchased a tract of the former ranch in 1871 and relocated their women’s seminary from Benicia to Oakland, they maintained a farm with grain fields and a dairy herd to feed students and faculty. As late as 1916, a large orchard spread over the area where Olney and Orchard Meadow Halls now stand, while kitchen gardens and pastures occupied the slopes near today’s Founders Commons.

As industrialization transformed the scale of agriculture across the country, Mills—like many other liberal arts colleges—gave up on the campus farm. For much of the 20th century, agricultural science remained the domain of large land-grant universities. But around the end of the century, a new trend emerged: students at Dartmouth, Pomona, Middlebury, and Bowdoin Colleges, among others, took the initiative to break ground for organic farms that enabled them to explore environmentally sustainable ways of producing food.

“The rise in college farms reflects a growing awareness of the connection between food systems and people’s health and environmental degradation,” explains Karen Fiene, director of construction, compliance, and sustainability at Mills. “At the same time, colleges are realizing that farms are a big draw for students. They help with student retention and provide practical experience and service learning opportunities.”

Mills students began reclaiming the campus’ agricultural heritage a decade ago, when volunteers planted a small community garden within the College’s botanical garden. In 2010, Lauren Messmer, MBA ’11, wrote a thesis proposing a larger campus farm to provide food for the dining halls as well as educational opportunities for students. In the same year, graduating seniors designated their class gift to the farm’s development. Former president Alecia A. DeCoudreaux, an early advocate for those goals, allotted the current site for the project, and students began cultivating a small vegetable garden there.

In 2015, the Clarence E. Heller Charitable Foundation funded creation of a master plan for the farm, envisioned as a “place that demonstrates the values of Mills College—leadership, social justice, and equity.” The plan showed how the farm could not only be financially and environmentally sustainable, but also serve as a learning hub for students and a community hub connecting the College with its neighbors. A major gift from the former chair of the Mills board of trustees, Kathleen Burke, and her husband, Ralph Davis, enabled intensive development of the site to begin in 2016 under the direction of the farm’s first manager, Alisha Strater. Last year, Strater enrolled as a student at Mills and handed off responsibilities to Dashe.

Today, alongside the orchard and garden beds, the farm contains a greenhouse, kitchen, toolshed, irrigation, solar panels for electricity, and an artistic metal gate forged by sculpture students and faculty. These facilities not only support the farm’s productivity and students’ hands-on learning, but also help make the farm a welcoming place for community groups to visit. Volunteer organizations have dedicated workdays to the farm and grade school groups have learned about organic gardening.

Mills students continue to make a profound impact on the evolution of the farm and to learn new skills in the process. Coco Kennedy ’18, an experienced beekeeper who transferred to the College as an undergraduate in 2016, says, “I thought it would be great to have honeybee hives on the farm. Alisha helped me make that happen.”

Kennedy soon found herself doing much more. She learned to write grant applications, one of which enabled the farm to win a $5,000 grant from the Bayer Feed a Bee initiative. She continued to assist with the project after graduating last year, working with Dashe to plant native flora that support native bees, nature’s most efficient pollinators. “Before I came to Mills, I had never experienced organic farming or thought about planting a native pollinator garden,” she explains. “The farm gave me more of a purpose, more ideas about where I wanted to take my interest in beekeeping. Now I want to focus people’s attention on the importance of native bees to growing food and of helping these bees survive climate change.”

Recalling her student days on the farm, she says, “The minute I stepped on this little piece of land, I knew it was special. There are a lot of students at Mills who’ve never had the opportunity to put their hands in the dirt. But they really fall in love with it here.”