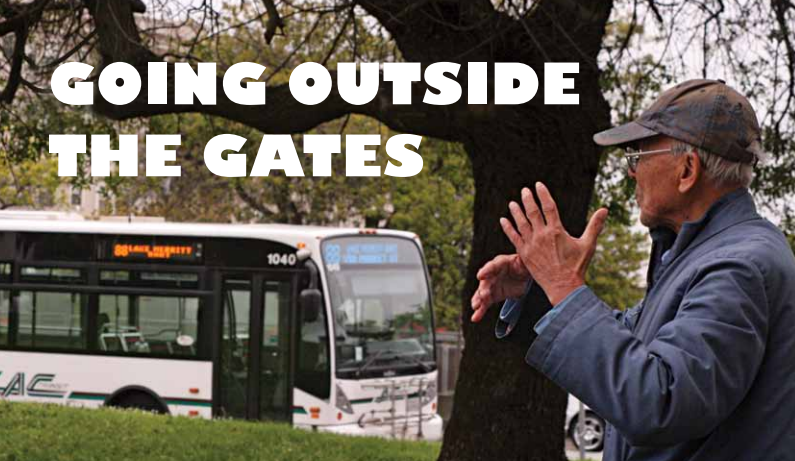 Going outside the gates

The opportunity to get up early and take pictures at Oakland’s Madison Park was a research dream come true for Iris Corey ’12. Corey was one of five Mills College students who took turns rising at dawn this summer to document the way people use the park, which is in an area under consideration for redevelopment by the city.

“People have a misconception that the park is not used, so city planners see it as a space for development,” explains Visiting Assistant Professor of Anthropology Rachael Stryker, who managed the project in conjunction with the Oakland Asian Cultural Center. Interns conducted a complex “cultural mapping” project to demonstrate how important the park is for its neighborhood. Cultural mapping is a process used to identify and document the cultural resources of a community, including arts and heritage organizations or cultural occupations as well as intangible assets such as stories, traditions, and practices that shape a sense of identity and place. In Madison Park, interns counted heads and conducted interviews with people twirling their way through vigorous arm exercises, practicing the slow and deliberate moves of Tai Chi and Qigong, and even line-dancing in the early morning hours.

“What I initially wanted to get was experience with social research,” says Corey. “Some students struggle to find ways to relate to Oakland—this program provided a bridge. It was awesome!” Elizabeth Welsh ’12 echoes the thought: “Going out into the city, you feel more connected.”

“What interested me was the potential to link Mills to the community and, as an educator, to take the lesson out of the classroom,” says Stryker. “I was able to teach anthropology in a way I had never taught it before.”

Interns in the cultural mapping project not only gathered data about park users but learned how to use state-of-the-art software to map how, where, and when the park is used. Interns logged their data using Geographic Information Systems (GIS) to produce an animated map that shows that as many as 300 people use the park daily, most of them between the hours of 5:00 am and 10:00 am. They also created a video and storyboard which is now part of a traveling exhibit destined for planning meetings and other places to gain support for saving the park.

While faculty mentors provided guidance, the students did the work. In all, some two dozen interns participated in five summer projects that Mills developed in partnership with the city of Oakland, including mentoring/coaching inner-city kids, training budding entrepreneurs, establishing a career advisory network for former foster youth, and studying traffic patterns to improve neighborhood vitality. These “Investing in Oakland” projects were selected based on the benefit they would provide to participating students and on their relationship to city priorities of education, neighborhood safety, economic development, sustainability, and mentoring.

Interns in one program designed an original curriculum to help kids between the ages of 10 and 12 expand their career aspirations. “We were teaching them that you are making choices every day to get where you want to be,” explains Diana Arbas ’12. After learning a methodology developed by two-time Olympic athlete Marilyn King that emphasizes passion, vision, and action as steps to high achievement, the interns designed lesson plans to help preteens figure out their career goals. A typical lesson asked kids to identify who they wanted to be. Not surprisingly, many named a famous football star or singing sensation like Beyoncé. By the time they finished exploring their interests and options, they began to recognize other possibilities, such as becoming a medical scientist or video engineer. “Seeing kids realize all the opportunities available to them was really rewarding,” says Ashley Schaffer ’12. Interns then helped students create success maps, building in adult and peer support to help them overcome potential obstacles. “It isn’t just about dreaming big. It’s about fleshing out what it takes to get there,” explains Michaela Daystar ’06, who directs the Institute for Civic Leadership at Mills and co-managed the coaching project with King. They hope to build an alumni network of youth who have gone through the program and can mentor others, she adds.

Still other interns found themselves in unexpected places—inside a Jack London Square parking garage, for example, or studying traffic patterns along Oakland’s busy International Boulevard—as they participated in a collaborative project with Oakland’s public works department to improve bike and pedestrian flow on city streets. Two years ago, Mills worked with the city on a plan to improve bike and pedestrian access in the Laurel District near campus. That project is helping to create a more vibrant and viable neighborhood, with more people able to stop and shop there, says Assistant Professor of Public Policy Mark Henderson, who oversaw both transit projects.

“From a policy perspective, this is what I love most: promoting growth and change for the greater community,” says Jillian Harris ’12, who researched Bus Rapid Transit, a system which uses a designated bus lane and signal light priority to move buses quickly and more efficiently through congested areas. Veronica Perry ’12 surveyed Jack London Square to come up with short- and long-term solutions to the parking problems and confusing signage that plague the area. “The Bay Area has been progressive in some areas, but public transportation hasn’t been our forte,” she says. For Veronica Beaty ’11, one great lesson was learning about the complexity of urban planning. “I got a sense of the difficulty of balancing how diverse a city is, how many conflicting needs there are,” says Beaty, who is now pursuing her master’s in public policy at Mills and has been hired as an intern by the city to continue her work through the fall semester.

Faculty and students alike appreciated the interdisciplinary nature of the work, with interns from different disciplines working together. “They all came in with their different expertise and taught one another,” says Stryker. Intern Hélène Langlamet ’12 agrees: “People were bringing different perspectives to the project. There was a different type of expression and different ideas coming from every person.”

Working in Oakland also gave interns a profound sense of their surroundings and their ability to contribute to the community in vital ways. “It’s not just abstract theory. This actually prepares us to do something,” Welsh says. “It made me more aware of the city,” adds Harris. “Mills is a beautiful, safe community but we have what’s known as the Mills bubble. We need a reason to go outside the gates.”

Ana Reidy ’12 says her work with inner-city youth taught her an important lesson. “A small group of people can do really powerful things,” she says. “It’s good to challenge yourself, get out of the comfort zone and be part of something bigger than Mills.