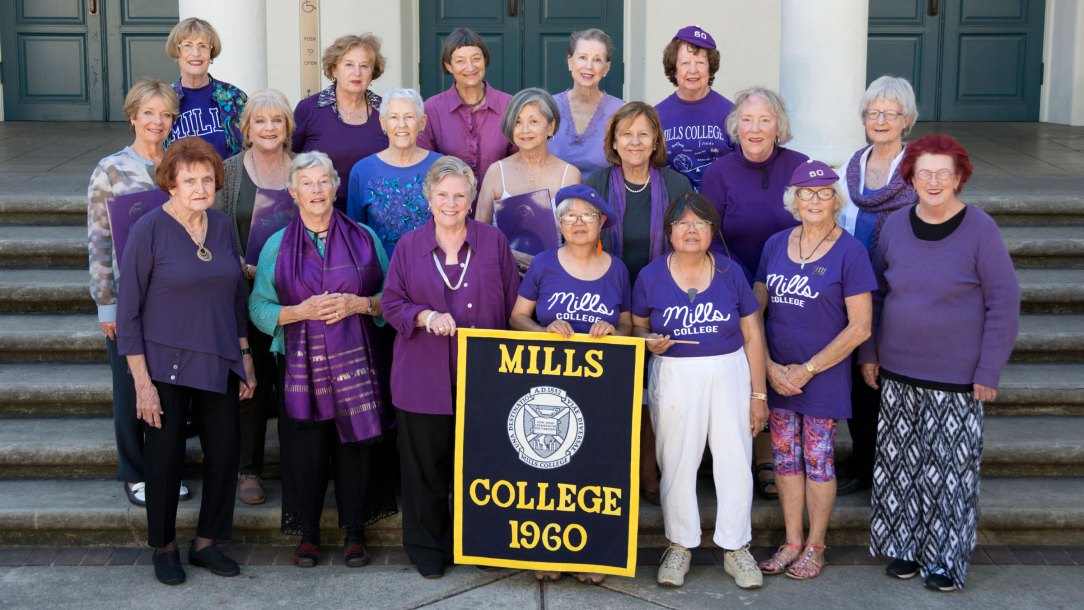 A new book closes a chapter on the Mills Longitudinal Study.

A groundbreaking study of Mills alumnae marks its 60th anniversary with the publication of a new book.

When Ann Markewitz ’60 graduated from Mills, she entered a world in which societal expectations for her life revolved around getting married—to a man, of course—and having children, with career taking a secondary role for most women, even college graduates. And for a while she went by the book, moving to Berkeley with her husband and raising two daughters. After reconsidering her identity in midlife, Markewitz ultimately married a woman, who she has now been with for 42 years. It’s a life path that would have been difficult to imagine in her youth, but one that has proved deeply fulfilling.

Her journey was chronicled through her participation in the Mills Longitudinal Study, a groundbreaking look at the course of women’s lives conducted by Berkeley psychologist Ravenna Helson. How groundbreaking was it? In its early days, a monograph on the participants—then in their 20s—was rejected for publication. “The person wrote to [Helson] and said, “Your sample is too small, but quite honestly, if you had 1,000 women in your study, we wouldn’t publish it,” says Valory Mitchell, who first became involved in the study as a graduate student at UC Berkeley and has now seen it through to the publication of a book.

Women on the River of Life: A Fifty-Year Study of Adult Development, by Helson and Mitchell, was published in November 2020, capping off six decades of inquiry with a look back on the many insights the study brought to light—and illuminating an area of research that was, and remains, underexplored.

In 1958, Dr. Helson began her decades-long research project tracking the personalities, lives, and careers of Mills alumnae as they changed over time—or didn’t—in one of the only psychological studies of its kind: a longitudinal glimpse into the lives of the same group of women, every 10 years. Subjects were recruited from the Mills senior classes of 1958 (65 participants) and 1960 (77) in order to study “creativity, leadership, and plans for the future in modern young women.” The participants were 97% white and 3% Asian, largely reflecting the demographic makeup of Mills at the time.

Organized chronologically, the book takes observations from the five major rounds of data collection and presents them in “ordinary language,” as Mitchell describes it—from the study’s beginnings looking at creativity and personality in young women and how these characteristics affected their choices about family and career in midlife, to the effects of personality on attitudes about retirement and late life purpose. “To our great surprise, no one had really ever mapped the adult life course of women,” Mitchell says.

We know now that sex and gender have a significant impact on the effects of medicine, the course of disease, and our overall understanding of physical and mental health. But research in the sciences have traditionally been deficient in their attention to, and involvement by, women. Even now, many medical treatments are based on studies conducted on men, or studies that did not account for differences between women and men.

Sexism in scientific study has been a longstanding issue. In the 1930s, Sigmund Freud declared that women stop developing psychologically around age 30. Even as psychology came into its own as a rigorous academic discipline, there was a pervasive lack of interest in women as subjects. Times have changed significantly—and even though we still have a way to go to achieve gender equity, researchers now have a better understanding of the need to include people of all genders. The general public is also increasingly aware of the value of research that centers women.

And yet, the Mills Study remains unique. Thus far, no other study has paid such granular, detailed attention to observing personality across the lifespan, enabling Helson and her associates to draw a number of interesting conclusions about the various stages of women’s lives, and how they are affected by personality traits as well as the sweep of social and historical change.

When the study began, it focused primarily on creativity, looking at young women deemed to have “creative potential” and tracking their expectations with respect to family, career, and their future. In the late 1950s and early 1960s, expectations for women tended to align with traditional milestones such as marriage and motherhood. Several chapters of the new book discuss the Mills women’s attitudes toward—and participation in—these “social clock projects,” as Mitchell describes them.

Across the decades, the advent of the women’s movement and gay liberation broadened existing ideas about what women were capable of doing, and what was socially acceptable. It even affected the way researchers themselves approached their studies. “The feminists really changed a lot of research in very important ways, like acknowledging the researcher’s role, and that it couldn’t really be sterile,” says Carol Whitehill, one of the participants from the Class of 1958.

A feminist and researcher herself, Helson helped bring about these changes. Subjects were greeted with kindness, warmth, and genuine interest, whether they were at the institute in person or simply filling out questionnaires—a departure from the expected atmosphere of clinical detachment. It was, many felt, an opportunity to reflect on their lives with a depth and regularity that they might not have otherwise had.

As the study participants experienced different life stages, researchers noticed that personality was a very stable predictor of the paths women took. Some defied socially prescribed expectations, while others followed the norms of marrying and having children soon after college. However, as these women grew into their 40s and 50s, their priorities would change—sometimes quite drastically.

Diana Birtwistle Odermatt ’60, who had been organizing a session on the study for Reunion 2020, initially took her life in a more traditional direction. She got married right after graduation—“the last thing in the world I ever expected of myself!”—and stayed happily married for 60 years. Once her children were in high school, however, she felt ready to return to work. She began with a six-month position in the Mills admissions office, but she stayed 10 years and became the College’s first dean of admissions.

The Mills study revealed that there are many ways to find happiness in one’s work, and, beyond that, in life post-retirement. In fact, contrary to popular understanding, women in their 50s often experience a prime of life rather than the tribulations of menopause and the empty nest.

“Society seems to make a big point of telling women that their lives are over after a certain point, and the women themselves do not feel that way,” Mitchell says. In fact, the Mills Study research confirms what psychoanalyst Erik Erikson posited about psychosocial development later in life: the continuing importance of generativity, or a concern with guiding and nurturing the next generation.

“The idea is that you’re leaving society with something that will outlive you, that’s a positive contribution,” Mitchell says. “Maybe that’s your children, but maybe it’s also that you do things for the society, or you create things, or you make sure to preserve and protect things that are of value.”

Several chapters of the book examine how the women in the study attained that sense of generativity. Ann Markewitz describes this happening in her family life, in maintaining close relationships with her children and grandchildren; but also in her later career, working as a consultant with the Tohono O’odham Nation in Tucson, Arizona, to build a skilled nursing facility. According to Markewitz, this was one of the great learning experiences of her life.

Perhaps this is one of the book’s most significant takeaways—that attainment of certain milestones does not mean a person stops learning, growing, or contributing.

In a way, the Mills study itself is a mirror of the very same life stages it describes—and, with the recent book publication, the study has reached its stage of reflection and generativity, leaving something of itself to the Mills community, the field of psychology, and to future generations.