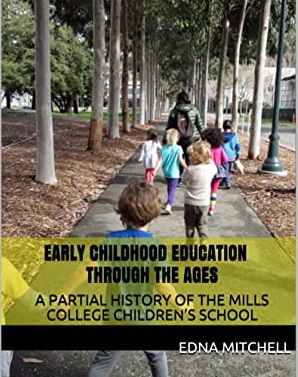 Since 1926, the Mills College Children’s School (MCCS) has conducted rich and varied research on child behavior and development—a history that Professor Emerita of Education Edna Mitchell wanted to document in its own book. Published independently last April, Early Childhood Education Through the Ages: A Partial History of the Mills College Children’s School covers the development of European and US educational practice, with final focus on the evolution of MCCS as the first campus laboratory school in the western United States. The book is available for purchase on Amazon.

Mitchell had always been deeply interested in the development of teaching as a profession, which is why she devoted the first half of the book to foundational ideas on education from past to present. “I hoped to link those from the past, both internationally and nationally, with the gradual development of the Children’s School at Mills,” Mitchell says.

The second half of the book is dedicated to Mitchell’s personal experiences with MCCS. When she joined the Mills faculty in 1973 as head of the Department of Education, coming from Smith College, she was eager to work with the Children’s School after positive experiences with the laboratory school on the Smith campus. Her research focused on children’s play in particular, as well as toys and playgrounds as socio cultural influences. Combined with her interest in history and the philosophies of education, the book was a natural product of her time at Mills.

But that research wasn’t the only thing she accomplished while on the Mills faculty. In addition to her work with the Department of Education, Mitchell also served as the director of Graduate Studies, was founding director of the Women’s Leadership Program, and created an evening degree program for non-traditional-age working women.

About the phrase “partial history” in the title of her book, Mitchell explains: “Many others who have been part of the Children’s School will have more versions to add. […] There could have been many more voices, but that is for another author to solicit and organize. My book is not our final history.”