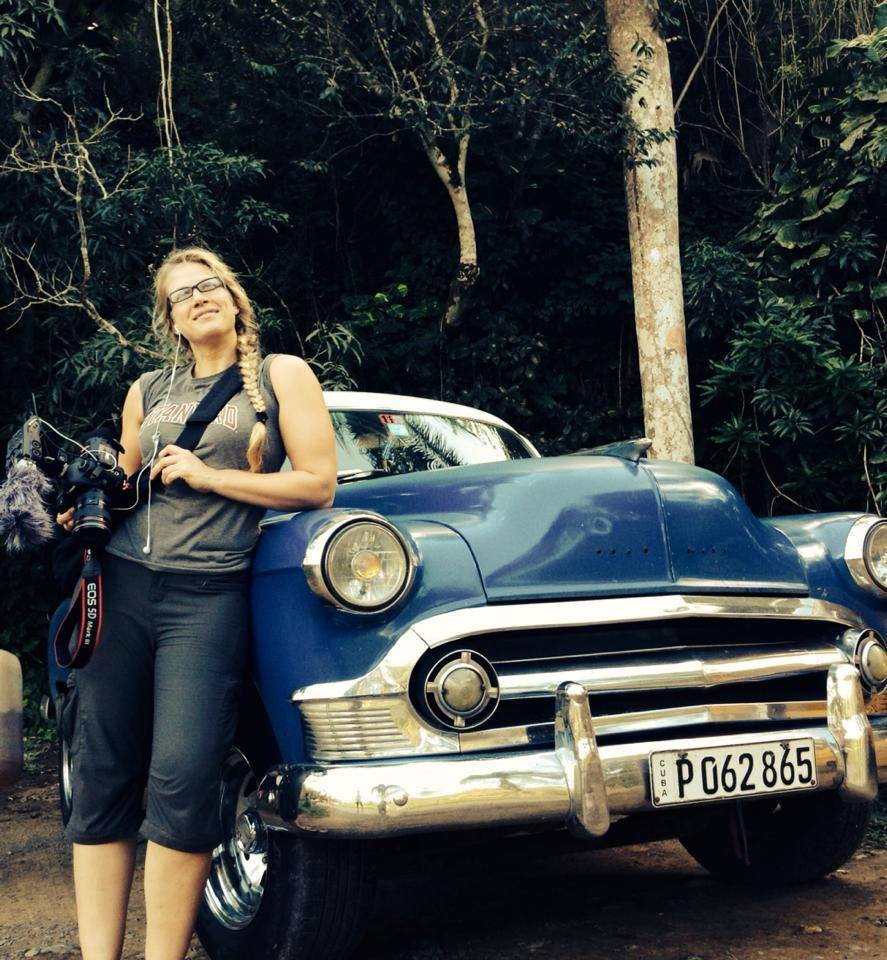 Filmmaking from the other side of the boat

From pirates to pornographers, documentary filmmaker Meg Smaker ’12 seeks out
unorthodox perspectives to help make sense of the world.

The documentary film Boxeadora opens with images of the Cuba we think we know: Che Guevara’s portrait on a weather-beaten wall, Havana Harbor, pastel townhouses with bright 1950s sedans out front. In an open-air boxing gym, chiseled young men jump rope and prepare to spar. “Since Castro’s revolution,” a narrator explains, “Cuba has won more Olympic gold medals in boxing than any other country in the world.” The camera pans down a line of boxers until it comes to rest on a woman: Namibia, Cuba’s only female boxer and the star of this film. Unseen, behind the camera, is Meg Smaker ’12, Namibia’s friend, training partner, and storyteller.

In 16 minutes, Smaker draws us into the story of Namibia’s struggle to train for the Olympics while living in a country where women are banned from boxing. We also join Namibia in her daily routines, on a visit to her mother, during a Santeria blessing. We gain a perspective on Cuba that few people would ever have thought to look for.

Smaker, a competitive boxer herself, met Namibia while visiting Cuba to train during a break between semesters while attending Stanford University’s MFA program in documentary film. She completed Boxeadora, her MFA thesis, in 2014, and since then the film has screened at more than 30 festivals from San Francisco to Cannes; it is now showing (through July) as part of Lunafest, a traveling festival of award-winning short films by women. Its accolades include a Student Academy Award from the organization that presents the Oscars and a Jury Award from the SXSW Film Festival. Just as important to Smaker, Boxeadora helped secure a visa for Namibia to speak at film festivals and to train in the United States, as well as a tentative agreement from the head of the Cuban Boxing Federation to lift the ban on women in the sport in time for the 2020 Olympics.

“Most films about Cuba are very political,” says Smaker. “But Boxeadora is personal. You see that this person has a dream she wants to go after. Everyone can relate because we all have had hurdles in our lives. The universality of the struggle opens up the world of Cuba in a way that a political documentary would not.”

Smaker faced a number of hurdles herself in making the film, including funding its production. “I applied for—and was denied—over 30 grants,” she says. “Foundations always want to know what your ‘impact’ is. But I don’t want to save the world, I just want to understand it.”

Smaker’s desire to understand the world animates her life as well as her filmmaking. Raised in Contra Costa County, Smaker attended Butte Fire Academy and Chico State, then worked for several years as a firefighter. In 2002, in the wake of al-Qaeda’s 9/11 attacks, she made a solo trip to Afghanistan. “My questions about why the world had changed so much weren’t answered by mainstream media, so I went to find the answers myself.” A family in a small village took her in and there, she says, “I realized my whole perception of the world was wrong. This fueled my desire to understand more about the world.”

In 2003, she and two friends travelled to Colombia to camp in the Darien Gap, a rainforest along the Panamanian border. They were abducted at gunpoint by a right-wing paramilitary group and held hostage for 10 days. After her release, Smaker told reporters, “I learned more in those days about the region and its politics than I had in my whole life.”

Smaker returned home, but was soon traveling again. She went to Yemen to learn Arabic, then found a job as head instructor at a fire academy there. She stayed in Yemen for more than four years—with visits to Somalia, Eritrea, Ethiopia, and Tanzania— and spent another year in Qatar. While in the Middle East, she decided to return to college as part of her quest to understand more about the world. She knew she wanted to tell stories through documentary films that were grounded in research, and her former high school English teacher—Susan Klassen MacDonald, who received her teaching credential from Mills in 1991—recommended that she apply to Mills. At the College, she majored in political, legal, and economic analysis (PLEA) while studying video production with Samara Halperin, visiting assistant professor of studio art.

“Meg isn’t scared of telling stories that need to be told, even if they’re shocking or halfway around the world,” says Halperin. “She pushes boundaries in her storytelling, and as a director she identifies with people who live outside of society’s norms.”

At Mills, Smaker made films about two such outsider groups. Sex, Drugs, and Student Loans featured interviews with students who meet the rising cost of college education through sex work and selling drugs. Somalia and The Piracy Bell Curve explored the reasons pirates base their operations in Puntland, a region in Somalia. The film evolved from field research for an academic article Smaker co-authored with government professor Martha Johnson. “It was a hand-drawn, animated documentary, but I had never done animation before. I went to Samara with my idea and they said, “You can do this!’”

Halperin encouraged Smaker to enter Stanford’s MFA program after she graduated from Mills, and has continued to serve as her mentor. “Samara never tried to censor my films,” says Smaker. “They had faith in my abilities and pushed me to try new things. They gave me faith in my own vision as a filmmaker and the confidence to take risks. That person is like magic fairy dust for filmmakers.”

“I like stories that take an unorthodox point of view on controversial issues that we think we already know about,” says Smaker, who now lives in the Maxwell Park neighborhood, just minutes from Mills. She’s exploring a number of ideas for her next film, including one looking at the effect of rapid economic development in the Middle East from the perspective of three women of different generations.

Smaker has also founded Doc Farm Films, a nonprofit organization, to help secure funding both for her own projects and for other filmmakers creating story-driven, controversial, or difficult documentaries. Smaker’s track record inspires confidence that she will pull this off, too. “The thing that makes Meg so successful,” says Halperin, “is she goes for it. She fights for what she believes in.”

To explain why she’s so committed to promoting such alternative narratives, Smaker says, “Imagine you’re on a boat, and someone yells ‘whale!’ Everyone runs to the side of the boat and takes pictures of the whale. There are lots of beautiful pictures, but it’s the same old whale. I like to hang out on the other side of the boat. Maybe I see nothing, maybe I see an orca shagging a mermaid . . . . I’d like to have more people on that side of the boat with me.” ◆