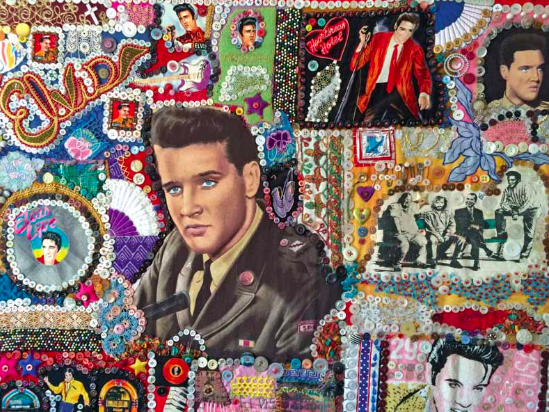 Not content with casual fandom, two alumnae elevate their interest in the rock’n’roll icon to become internationally recognized experts on his lasting cultural influence.

Two alumnae are experts on the “king of rock’n’roll”—and aficionados of the people who adore him.

Is there such a thing as the “average Elvis fan”? Is it Paul MacLeod, who filled his two-story antebellum home in Holly Springs, Misssissippi, with a hoard of Elvis Presley memorabilia and dubbed it “Graceland Too”? Perhaps it’s Phyllis Presley, who changed her name in the King’s honor and receives regular visits from the ghost of Elvis—a ghost who leaves the toilet seat up.

M’Liz Hancock Hinds ’67 and Marjorie Montgomery Wilkinson ’67 have met countless Elvis fans of every stripe in their 20 years attending the annual Elvis Week gathering and celebration at Elvis’ mansion in Memphis, Tennessee. As it turns out, the “average fan” might be as elusive as the ghost of the King himself.

Hinds admits to falling for Elvis when she was 11 years old, “on a Sunday night in September” when he appeared on The Ed Sullivan Show. When she met Wilkinson, they were undergraduates living in Olney Hall. They both loved rock and roll, but they didn’t indulge their mutual Elvis fandom until much later.

By 1993, Hinds was communications director for a member of Congress (she is currently retired from the Los Angeles Unified School District), and Wilkinson was a probate and estate planning paralegal—“really serious jobs,” Hinds recalls. Making the pilgrimage to Graceland for Elvis Week, the friends decided, would be fun and different; something they could both check off their bucket list.

That one-time fling turned into a life-long affection for Elvis—and for his fans, a diverse group that includes academics and celebrities as well as eccentrics and outsider artists.

“We just fell in love with the Elvis world,” Hinds says.

Wilkinson agrees. “August in Memphis is like a family reunion for us,” she says. It also provides her with the chance to bring home a little piece of the Elvis mystique: over time, she has amassed a collection of handmade, heartfelt Elvis tributes by untrained artists, including a three-dimensional needlepoint of Elvis and Priscilla’s wedding cake.

“People’s first words upon entering my home are usually, ‘Oh, you are an Elvis fan?’” Wilkinson says. Surprisingly, the answer is no. “I’m really a fan of Elvis fans. They are a fascinating and diverse group of people who defy any attempt to categorize them.”

Elvis, she says, provides something for everyone, and that’s part of his enduring appeal.

“Elvis is alive and well in academia and is being used as a gateway for studying American culture, race, class, sex, religion, and life. He was a catalyst for change,” says Wilkinson. “Elvis had a huge impact on music, of course, but he also influenced so many other aspects of our lives, more so than any other musician. You don’t know what kind of sandwich Frank Sinatra liked or what Roy Orbison’s house was named or what kind of car Mick Jagger drives, do you?”

After Presley died in 1977, at the young age of 42, it became even easier to mythologize him. By now, he has pervaded the American consciousness to such an extent that well over a thousand books have been written about him. In order to document the breadth of his influence, Hinds herself authored Infinite Elvis, an annotated bibliography that includes doctoral dissertations, classroom curricula, and even novels in which Elvis is a fictional character.

A historian by training—she majored in American civilization at Mills—Hinds has long been interested in the idea of how and why Elvis became such an icon. “The thesis of my book is that you can measure the influence of a celebrity on a culture by looking at what was written about him,” she says. When you look at the myriad of areas Presley influenced, she says, you begin to understand why he was so famous.

Of course, to truly document the Elvis phenomenon, one must go beyond the talent and down-to-earth charm of the man himself and touch on the deeper cultural and sociological roots of his popularity.

In other words, studying the impact of Elvis also means getting to know his fans. studies in Japan, the religion correspondent for the BBC, the last person to make it over the Berlin Wall who had been jailed by the Stasi for his love of Elvis, a professor in Finland who translated Elvis songs into Latin, Condoleezza Rice’s press secretary…and Prince Mongo of the Planet Zambodia, who actually used to play racquetball with Elvis and who runs (alas unsuccessfully) for mayor of Memphis in every election,” Wilkinson says.

Not only has Elvis scholarship facilitated some unexpected friendships for Hinds and Wilkinson, it has brought them into the limelight as Elvis experts: they have been featured in news stories, documentaries, and conferences, and have served as Elvis consultants for news outlets ranging from NBC to the BBC as well as to the Smithsonian Institution.

Ultimately, though, Elvis Presley’s appeal is more than just academic.

“He was a crossover figure for bringing African American music into the mainstream,” Hinds points out. “He brought young people of all races together without even realizing the importance of what he was doing. And he became one of the first truly American pop icons in an era of profound change.

“He was like a bridge, and we crossed it.”