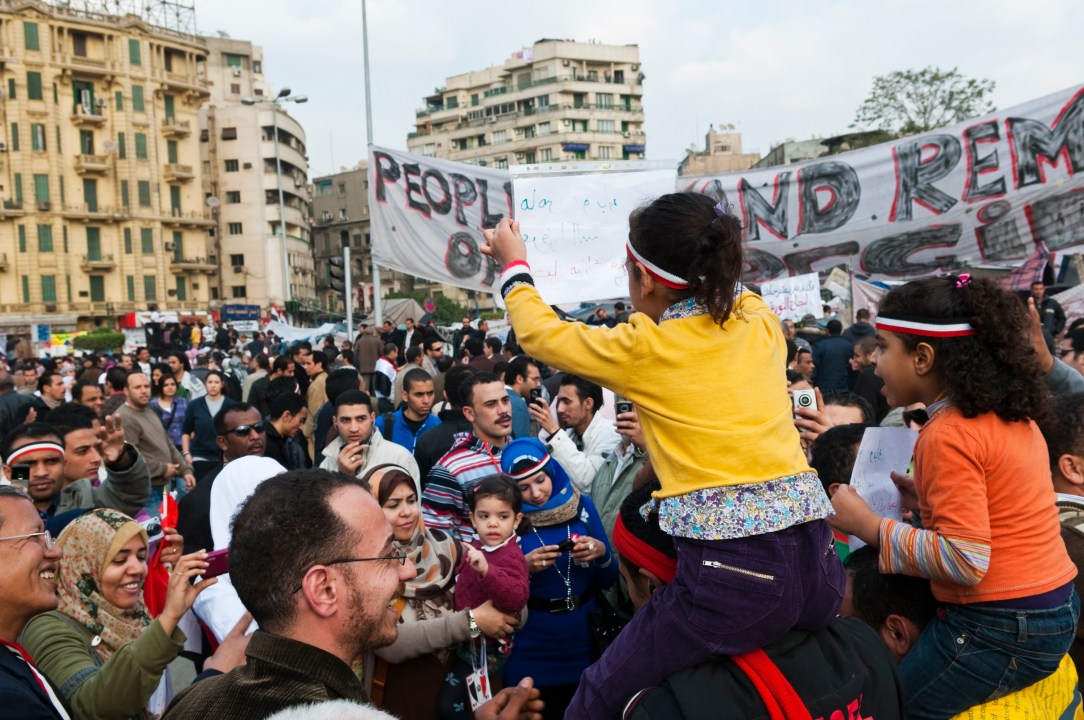 Evolution of a revolution

When civil protest deposed Egyptian President Hosni Mubarak in February, the world watched in amazement. A Mills alumna and Cairo resident shares her perspective of those riveting events and thoughts on the future of her country.

My own experience is that on January 25, young people organized protests against widespread police brutality. But as their requests for change were neglected, the demonstrations and demands increased. Eventually, the police were pulled away and the army deployed to the streets. Unrest grew stronger and looters began to attack shops, hotels, and residences. We watched a large mall across the river from us get burned down. On television, they showed young men with stolen television sets, computers, clothing, and shoes, as well as other young people who caught them and brought them to the authorities. Citizens took it upon themselves to protect their homes, streets, and neighborhoods. The next day they met with each other and started dividing responsibilities. This happened all over Egypt and, for a few days, our country was protected by its young men.

Meanwhile, crowds converged in Tahrir Square—now known as Liberation Square. Demands began to be heard for President Hosni Mubarak, who had ruled the country since 1981, to step down from office. Local television news kept saying that things were under control and aired regular programs in spite of the fact that tens of thousands were assembling. Throughout Egypt, the authorities cut off the Internet and mobile phones, which were essential tools in organizing the protests.

We learned that the atmosphere of the Square was peaceful and orderly. It is remarkable how these young people organized bathrooms, sleeping areas, food, drink, prayers, and protection from opposing forces. We heard of old women bringing meals and of nearby stores contributing food and blankets. Christians protected Moslems when they had their Friday prayers and the Moslems did the same for the Christians when they wanted to pray on Sunday.

The military refused to use force against the demonstrators and the atmosphere turned festive, with music and entertainment at night. Mothers wanting to protect their daughters went with them to the Square only to like the spirit there and decide to stay. Fathers went in search and joined their families.

When pro-Mubarak groups went to disturb the demonstrators, it turned into a nasty, violent rampage. I am sure they were hired thugs, very different than the mostly educated young people who were leading these demonstrations. From that time on, it was everyone’s wish that Mubarak leave office.

By February 12, Mubarak had to give in and leave. The Square began to return to normal. My granddaughter’s 16th birthday was spent on Liberation Square cleaning up with the protestors who decided to leave no debris. (I only hope that seeing these young people pick things up will provide an example to others. Feeling responsible for one’s behavior, the environment, and the cleanliness of the city is not a given here.)

The organization of this revolution is of great interest. It had no real leaders but several savvy people who used Facebook, Twitter, and other technological means to organize their protests. The young people on the streets were educated and many spoke foreign languages. They knew how the rest of the world lived, and this knowledge spurred their call for democracy and freedom. These youngsters on the streets made us very proud.

In the past weeks, investigations have uncovered a Pandora’s box of corruption that seems to have no end. Every day we hear more about fiscal gluttony and the misuses of power; every day there is more scandal and disturbance. Ordinary people are flabbergasted by the news. I sometimes feel like the poor woman who sat next to the guillotine in the French Revolution and kept on knitting and was entertained by the rolling of the heads. It’s an awful feeling.

Government ministers, heads of corporations, parliamentarians, and many others are in jail. The Mubarak family and their cronies are under arrest. As we get closer to a court appearance by Mubarak himself, he gets sicker. He fears the court and it damages his health. After all, he is 82.

The vast allegations of corruption and greed have wiped away any good memories of Mubarak. This is a very poor country, with millions living in poverty. Young men can’t find jobs and so can’t get homes or get married. Health is a big issue; many people I know have died of cancer, hepatitis C, or kidney failure. Education is lousy, there is no research and very little development. Many foreign companies have taken over local businesses. All the while, the government elite were making millions at the expense of the country. That is why there is so much anger at Mubarak and his cronies.

I must say that Mrs. Mubarak was a real force in helping women and children’s causes, but she too is accused of abusing her position. I would hate for the good that she was responsible for to be lost.

Previously outlawed fundamentalist religious groups, who the authorities fear are one step away from al-Qaida, have been allowed to express their ideas. They are all over the media and scaring a lot of us. Hopefully women will protest if the religious fundamentalists attempt to remove some of the benefits that women have achieved.

There are still demonstrations—for jobs and higher pay or for housing. In one particular case, protestors have occupied the rail track between Cairo and Aswan, putting the government in a quandary: if they send troops, it looks like a brutal crackdown; if they leave the protestors alone, there is no transportation and no work. Either way, the protestors’ behavior is a result of the confidence they received in the revolution. They now know they can make a difference.

We all want our constitution to be changed. We want the period of the presidency to be limited. We want the army to protect the country, not rule it. We want higher allocations for health, education, services, research, infrastructure, and other areas benefiting the common man. We want a fair government where all citizens have the same rights and opportunities. We want the freedoms that are in your US Bill of Rights (except for the gun part). We do not want security forces checking our telephones and mail or a police state arresting people at dawn.

Often it is said that others have captured the revolution from those original young protestors. The fundamentalist religious groups have stepped in and their efforts are in the papers every day. Where are the revolutionaries? They have immortalized their revolution in countless songs, videos, jokes, and writings, but it is feared that their messages will be lost among the millions of issues coming up. We hope they don’t get lost. They are wonderful.

About the author: Nadia Mostafa Saleh ’59, a lifelong resident of Cairo, Egypt, enrolled at Mills on the recommendation of a family friend. She majored in child development and completed a secondary degree in anthropology. After returning to Egypt, Nadia began working in the family business, Nimos Engineering and Agricultural Development Company, and became chairperson in the mid-1970s. Nimos is one of very few female-run businesses in Egypt.