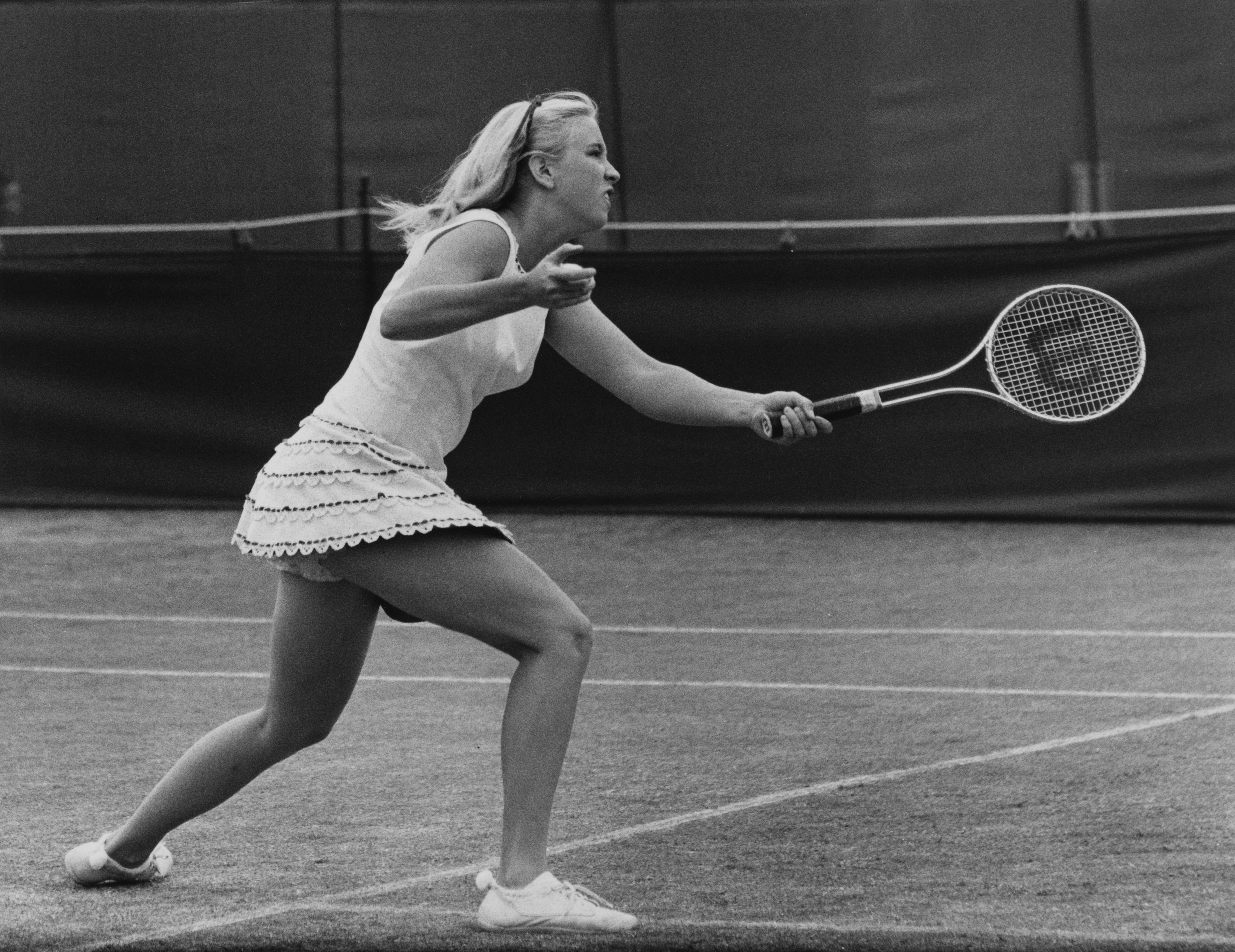 Kristy Pigeon ’73 was a top tennis player in the world–and, in a move of bold defiance, helped pave the way for equal pay for male and female competitors in her sport.

Growing up as an athletic, horse-crazy teenager in Danville, California, Kristy Pigeon ’73 never imagined she’d find herself on a Hollywood red carpet. But she was one of nine women, including multiple Wimbledon winner Billie Jean King and her doubles and Tennis Hall of Fame partner Rosie Casals, who broke away from the US Tennis Association in 1970 to form their own tennis tournament circuit in pursuit of equitable pay for female players. And she couldn’t resist the invitation to attend the September 2017 premiere of the movie Battle of Sexes, based on their early days of women’s professional tennis and featuring the historic showdown match between King and Bobby Riggs.

“I almost didn’t go because I’m not the type of person who wants to be in the middle of all that, but I enjoyed it,” Pigeon says. “All but one of us were there; we have a strong bond, and it was good to see each other.” Those “Original Nine” changed the course of sports history, paving the way for tennis to become the only sport that compensates men and women equally.

Yet it was almost by chance that Pigeon had picked up a tennis racquet. In the early 1960s, she was training as a competitive swimmer when she saw an announcement for an end-of-summer recreational tennis tournament. “I thought that might be kind of fun, so when I got out of the pool, I signed up,” she says. She won that tournament, and decided: “I really liked tennis.” She exchanged free lessons for working in the pro shop at the local country club and soon was tearing her way through increasingly competitive tournaments. In 1968, the year she graduated from high school, she won the US Tennis Association National Junior Championships and the girls’ singles championship at Wimbledon. She was the number one under-21 player in the world.

But she was also determined to attend college, choosing Mills for its small liberal arts environment and for the opportunity to study art with Ralph DuCasse. Since very few athletic scholarships were available for women students, Pigeon had turned pro, in part, to pay for college. At Mills, she split the academic year between her studies and playing the circuit, traveling as far as South Africa to compete. “It was very difficult both to play tennis and go to college,” she says. “Most other players didn’t do that: they just played.”

During this period, the popularity of professional tennis was on the rise. So too were the prize purses for tournament winners—at least if those winners were male. By 1970, men were earning as much as 12 times what women players were, and tournament organizers had no interest in hearing any appeals about equity.

So Pigeon and eight other top players teamed up with Gladys Heldman, the well-connected publisher of World Tennis magazine, to boycott the existing tournament series and create one of their own. “I knew I was taking a risk and could be banned from playing but, if we got suspended, I figured I always had school to fall back on, and we could just work it out later,” she says. The nine players signed symbolic one-dollar contracts and enlisted corporate backing from the Philip Morris Company, which was marketing Virginia Slims cigarettes to newly “liberated” women. “A cigarette and beer company!” she says, laughing. “As ironic as it was, they provided press packets and publicity that really helped us along the way. And—they didn’t show this in the movie—after our matches there would be cigarettes and a big bowl of Miller High Life beer on ice in the locker room for us.”

Although women’s opportunities were changing, the players still faced an uphill battle. “Our audiences weren’t big at first, I can tell you that” Pigeon says. “We worked like dogs to promote ourselves. We’d pass out free tickets or give free tennis clinics to the local country club women. We’d do radio talk shows at 6 in the morning.”

The time was right for women to take a stand “I was very aware of the larger women’s movement, especially because of my time at Mills,” says Pigeon. While she was a student, she was impressed by campus speakers like Betty Friedan and Stephanie Mills ’69, who made headlines with her outspoken feminist views on population control. “But I don’t think the women who were burning bras during my day had the best approach,” she adds. “Our tennis group overcame the outdated attitude that ‘women belong in the kitchen’ by proving that we were good and that we were as interesting to watch as men.”

Audiences grew as the new women’s tournaments offered top-notch play on the courts, plenty of bold characters, and exciting rivalries. Billie Jean King, the top woman player of the time, was an opinionated spokesperson for the group and for women’s equality. Gladys Heldman was a very capable promoter and built more lucrative prizes. Within a year, the “original nine” had expanded to include 40 women athletes signed up to play the circuit, which eventually formed the basis for today’s worldwide professional women’s tennis tour.

For most people, revolutionizing a sport would be a lifetime’s crowning achievement, but for Pigeon it was only the first of many. She played pro tennis for a few years after graduating from Mills, and then moved to Sun Valley, Idaho, to pursue other outdoor activities she loves—horseback riding, hunting, fishing, and mountain biking. She ran a tennis resort and was a ski instructor for 11 years. Then she had an “epiphany” about enabling people with disabilities to experience otherwise inaccessible wilderness on horseback. After volunteering with a therapeutic riding facility in the Bay Area and seeing directly how riding can improve physical, cognitive, and emotional well-being, she expanded her vision and built the Sagebrush Equine Training Center for the Handicapped (SETCH) in Idaho. “In certain forms of equine assisted therapy, the movement of the horse serves to balance and strengthen you; the horse’s gait actually simulates the walking action of a person, so many kids with different conditions can learn to walk later,” she says. For 20 years, she served as executive director for the program, which continues to provide free sessions for people with conditions from Parkinson’s disease to cerebral palsy, as well as for at-risk kids.

“I just dove into that head first and never came up for air,” she says. “That’s kind of how I do everything, until the next thing comes along.”

Pigeon retired from SETCH in 2010, and now spends most of her time restoring wetlands at her ranch in southern Idaho. She has plans to take up art again, as another way of celebrating the beauty she sees in the natural world.

Attending the Battle of the Sexes premiere prompted her to reflect on the many milestones of her life, she says, and on the ongoing battle for equal opportunity and respect. “Now, not only are women out there working and bringing home a paycheck—although it’s smaller than it should be—but they’re also doing the laundry and cooking. Culture still needs to change. We still need to push harder.”