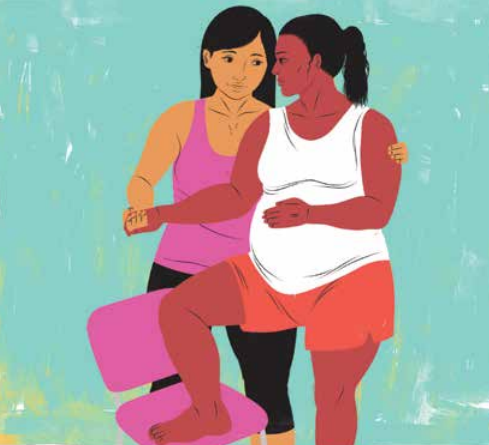 A spring semester offering since 2020, the Full Spectrum Doula Training course at Mills remains the only known doula class offered for college credit in an undergraduate program, and it became reality thanks to one student’s initiative. Tess Waxman ’22 first became interested in birth justice and doula training when she did her senior thesis in high school on the state of birth in the United States. “I just think [reproduction] is the most important part of life. It’s literally creating the next generation, and yet we don’t talk about it in school,” Waxman says.

In the world of reproductive health, doulas provide physical and emotional support to clients during pregnancy, childbirth, and the postpartum period. Yet, affordable doula training is rarely accessible in California, and it is almost never taught at the higher education level. When Waxman discovered that she couldn’t afford any of the online options, she turned to former Mills public health professor Karen Scott for suggestions. Scott then connected Waxman with other prominent experts in the birth work community—including Nickie Tilsner ’16, who co-founded Oakland-based Cornerstone Doula Trainings. “We do charge market rate in the Bay Area for doula training, which is hard for a lot of people to access,” Tilsner explains.

With the additional help from Scott, Assistant Adjunct Professor of Public Health and Public Health and Health Equity Program Head Catrina Jaime—and Health Sciences Coordinator Vala Burnett on the administrative end—Waxman pushed the groundbreaking idea for an equitable doula training course at Mills: not only would it offer college credit to students regardless of their major, but it would also give students access to financial aid to pay for the course. According to Tilsner, Mills participants were then charged 25 percent below the market rate, in addition to being covered by financial aid. Cornerstone has also provided two full scholarships to BIPOC students in each cohort.

“Students were able to access financial aid by us making it a class,” Jaime says. “So it’s very structurally important that we added it as a way for them to both get graduation credits [and financial support]. It’s the core of what our program is offering: being more equitable and accessible to a specific population that is our students.” Alumnae also provided financial support through several fundraising initiatives.

This plan helped students who wanted the training without becoming a nurse or doctor—especially first-generation students of color, who made up the majority—and it also provided research and internship opportunities through the public health and health equity (PHE) program. “These students would actually reduce disparities in their communities,” Jaime adds. “And we know that from [public health] literature and doula services, especially for women and birthing people of color.”

Under the guidance of the administration (including former Provost Chinyere Oparah and former Associate Provost for Curriculum Development Elisabeth Wade), Scott, and Jaime, community partners like Tilsner were brought on for the course. The first class was a huge success, and since then, the course continues to be packed with students interested in health equity and reproductive justice. “It’s knowledge that everybody needs to have, regardless of whether people want to become doctors or not,” Waxman says.