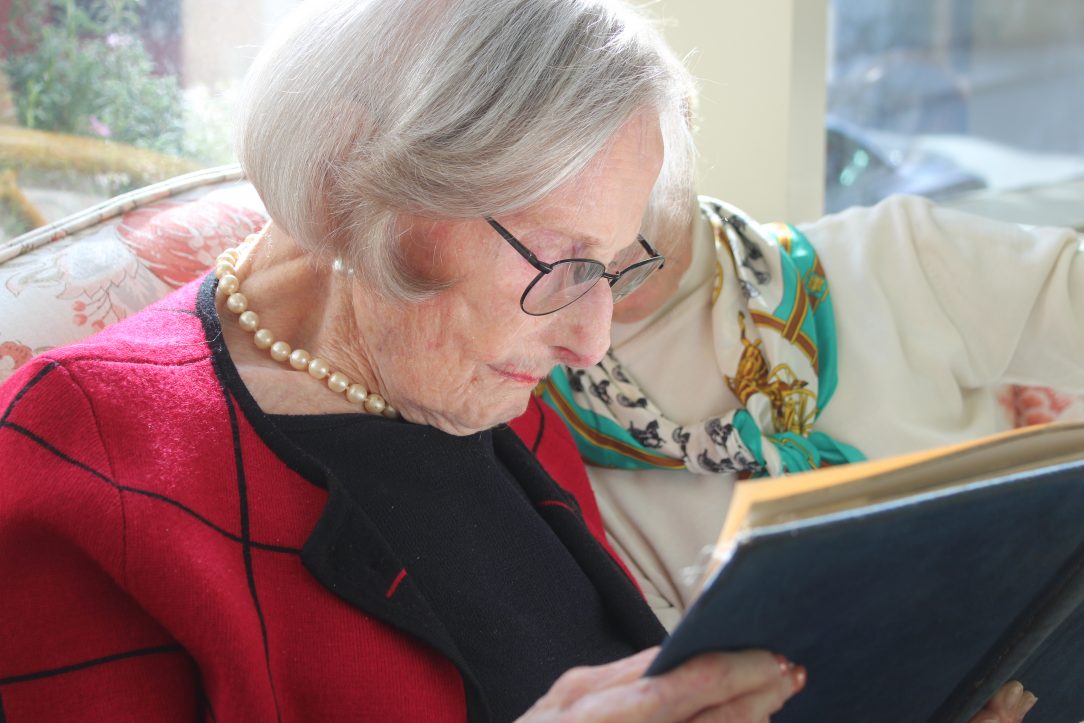 When Theresa “Terry” Loewy Breyer enrolled at Mills in 1933, she was carrying on a family legacy that also saw her mother and aunt attend the College when it was still known as the Young Ladies Seminary. But when she collected her diploma four years later, it was her father who cried. He had never gone to college himself, but he married a Mills alumna and sent two daughters there. (Breyer’s sister Hazel-Clair Loewy Dwoskin graduated in 1943.)

Fast-forward more than 80 years, and Terry Breyer still shares her father’s pride in her Mills degree. In the apartment where she lives mostly on her own, among decades of family photographs, her diploma always sits on a special stand—and not just when a Mills-related visitor is coming by. “Of course I’m proud of it,” she says. “I’ve taken good care of it.”

At Mills, Breyer lived in Orchard Meadow and majored in economics, particularly enjoying classes with Professor Glenn Hoover. “Terry has always had an affinity for numbers,” says her daughter, Barbara Baker.

Despite her family legacy, Breyer did not grow up in the Bay Area—she was born in Stockton, but she spent her childhood in Seattle. Ever since meeting and marrying the late Stan Breyer, a graduate of UC Berkeley and a San Francisco native, she has lived in Northern California. The two wed not long after Breyer’s graduation from Mills and moved to San Francisco, later relocating to Kentfield in Marin County with their three children. There, she co-managed and volunteered at Laurel House Antiques, the consignment store at the Ross Art & Garden Center, for several decades, pairing her economics degree with her love of decorating and helping others find hidden gems for their homes. “Not only did she know her stuff, but we got to furnish our house!” Baker says. “Antiques Roadshow is still one of her favorite shows.”

“I made a good thing out of [Laurel House], and I had lots of fun doing it,” Breyer adds. She’s even given lectures on antiques at San Francisco Towers, the retirement community where she has lived since the facility opened 23 years ago.

At 104, Breyer still shows off her style—she dresses in cardigans and pearls, and the walls of her apartment are decorated with prints from Laurel House. She enjoys playing bridge with other residents and reading the newspaper, and relatives come by frequently; she’s known as Gigi to her seven grandchildren and 10 great-grandchildren. A recent visit from the newest great-grandchild, at 8 months old, was a popular attraction for many of Breyer’s neighbors.

While neither of Breyer’s two daughters went to Mills—Baker “considered it,” she says—the family connection to the College has lived on. Breyer’s aunt, Rose Loewy Coleman, had a son named Clarence who married Joan Feldman, the daughter of Florence Bloch Feldman ’21. Clarence and Joan sent their two daughters, Barbara Coleman Frey ’68 and Elinor Coleman ’71, to Mills, and several grandchildren attended the Mills Children’s School. And that strong Mills connection came entirely through her proud papa.

This is the second in a series of stories celebrating the lives of Mills alumnae who have reached the century mark. Are you (or do you know of) someone who we should feature? Tell us about the centenarian Mills graduates in your life at quarterly@mills.edu or 510.430.3312.