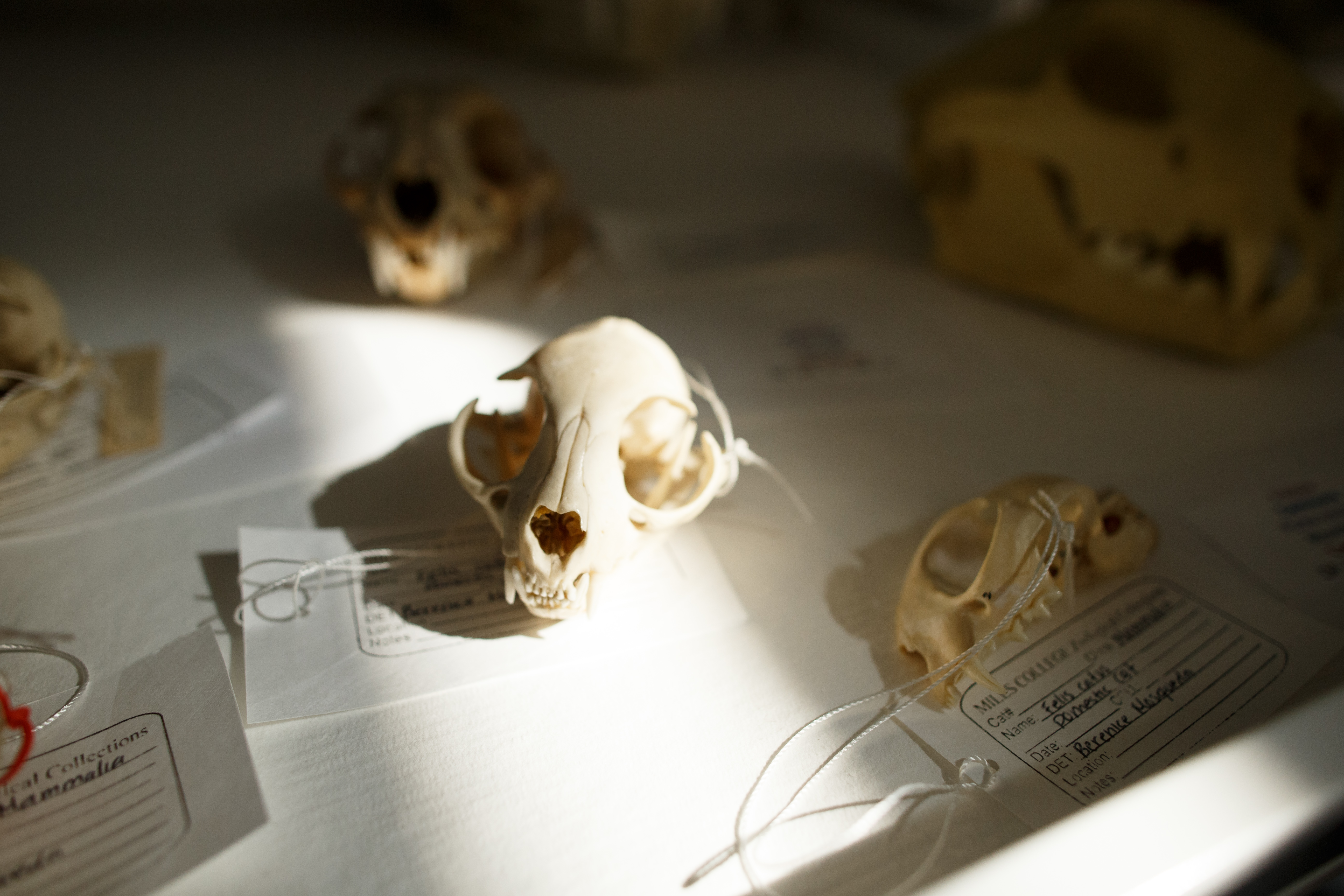 A look at the origins, care, and uses of the fascinating collection of specimens in the Mills biology department.

Possums and parrots. Egrets and eels. Moles and voles and orioles. These are just a few of the hundreds of biological specimens in the Mills natural science collection, which ranges from simple, spineless sea creatures to complex organisms at the top of the evolutionary tree. In these days of limitless online resources and simulations, this library of bones may seem anachronistic but, like a well-stocked shelf of reference books, it is an indispensable aid to teaching and learning.

“Digital reproductions just don’t provide that much of a connection to wildlife,” says Professor of Biology Jenn Smith, a primary caretaker of the collection. “Looking at a screen is very different from holding an animal that used to be alive right in your hands. You can investigate what it really feels like, what it really looks like, and come away with a much deeper understanding.”

John Harris, professor of biology from 1986 to 2013, explains how hands-on experience gives students a chance to look at something up close that they might not otherwise notice. “If you see a bird outdoors, you may get just a fleeting glimpse, or at a great distance. In my bird classes, I would put out a selection of specimens so students could understand how different bill shapes correspond with feeding habits, or what it means to have different toe patterns, webbing, and other adaptations.”

Faculty members in biology use the collection extensively to illustrate a variety of ecological and evolutionary concepts. “In looking at these examples, students learn the characteristics of each animal and what makes it unique,” says Smith. “The physical structures of related species illustrate their shared evolutionary origins, and different adaptations show how animals have developed specialized traits for feeding, locomotion, and reproduction. You can look at a stuffed possum and a possum skull to see different layers of the organism and learn how they cope with their world.”

All of this provides a useful supplement to textbook learning and field observations. “It’s one thing to see a picture, and another thing to see an animal live from a distance—but it’s entirely different to see it close and understand all the structural things or to notice the differences between species in real life,” says Lauren Burke, a senior double-majoring in biology and economics. “Having the real thing just hits the point home.”

Collections also allow for real quantitative studies, some of which hadn’t even been imagined when the original sample was collected. “You can get a DNA sample from a feather and do important genetic research on a species by using something taken from a specimen rather than going out to the field and collecting a live animal,” says Harris. “You can look at things that are extinct or very rare by accessing a specimen or assess changes in species and populations over time.”

And the power of these specimens to spark enthusiasm cannot be overestimated. “The hawks and falcons—all the raptors—are really cool. I love how gnarly their feet are and how sharp their bills are,” says Burke. “The kingfishers and hummingbirds have the most beautiful colors, their plumage is just incredible. And the pelican… well, you don’t think about how funny looking a pelican is until you stare at it for a while!”

“Of course, everyone coming into the Vertebrate Lab, where the collection is housed, is intrigued by the diverse array of specimens out on display,” adds Smith. “Everywhere you turn there’s something fun and interesting and distracting.”

The origins of the collection date back to the earliest days of the College. Professor of Natural History Josiah Keep, who taught from 1885 until 1911, was a deeply religious man who found divine handiwork in studying the marvels of nature. He wrote and illustrated several volumes on the mollusks of the Pacific and collected thousands of seashells over his lifetime. After his death, the bulk of his personal collection was distributed to Tohoku University in Japan, UC Berkeley, and other institutions, but many remained at Mills.

Along with Keep’s marine invertebrates, the collection currently includes a wide variety of insects, reptiles, and amphibians, along with 74 different mammal species and nearly 400 species of birds—which are one of the strong points of the collection. Harris estimates that nearly half of the birds were collected and prepared by Howard Cogswell, who taught at Mills through the 1950s while completing his doctorate at UC Berkeley. Cogswell went on to teach at California State University, Hayward; was elected director of the East Bay Regional Parks District; and was an important figure in the restoration and protection of salt marshes and shorelines in San Francisco Bay. His book, Water Birds of California, is still considered the standard field guide for water birds in the state.

A more peculiar contributor was Ralph Ellis, a son of wealthy socialites who was prone to mysterious illnesses and violent outbursts. Ellis began collecting animal specimens from family estates in Long Island, South Carolina, and Maine when he was barely a teen, and moved with his family to Berkeley in the early 1920s. He befriended many notable zoologists of the early 20th century and spent much of his fortune and time on scientific expeditions and in amassing a remarkable collection of thousands of rare natural history books. It is unclear how his specimens came to Mills; nevertheless, they provide a valuable geographic variety.

“Much of what is in the collection was collected at a time when the science was in a different place, so to speak,” says Harris, who points out that the ethics of science have changed significantly over the past century, as have the ecology and landscape that biologists study. “The days of people going out to shoot birds to make a museum collection are pretty much long gone. At no time while I was at Mills did we actively go out and try to collect animals.”

That doesn’t mean the collection is static, however. “When I first got to Mills, I saw a few rare species here and thought they really should be in a collection where they would be more scientifically useful,” says Harris. Mills held two specimens of Swainson’s hawk, collected from California’s central valley in the 1950s. Since that time, significant declines in the bird’s population have been linked to eating a diet of pesticideladen insects in their wintering grounds in Argentina, and the species has been listed as a threatened by the California Department of Fish and Game since 1983. Harris traded the hawks to the Museum of Wildlife and Fish Biology at UC Davis, a major research center. “I got a set of caribou antlers in return to help round out our mammal specimens,” he says—an appropriate swap for a teaching institution.

More recent additions typically find their way into the lab after an unfortunate encounter with a window or a car or a predator. Such animals may be prepared for keeping by lab manager Heather Pearl, who uses a colony of dermestid beetles to clean the bones. Others may be prepared by a student who is interested in learning the skills of taxidermy to preserve a more complete animal. Lauren Kong ’13, now a graduate student studying crayfish at Nicholls State University in Louisiana, recalls finding a dead dove while she was a student. “My lab partner and I thought it’d be cool if we could add to the collection ourselves,” she says. “Professor Harris helped us identify the bird, and gave us tips for taxidermy and how to preserve it. It was a really unique experience.”

“We are always updating the collection,” says Smith. More unusual species or those not found locally arrive as “bone clones”—cast resin replicas that painstakingly reproduce an animal’s original structural details, texture, and color. To provide a diversity of different shapes, and to reflect her own interests, Smith has added manufactured examples of koala, hyena, and lion, among others. She enthusiastically points out an African elephant tooth, explaining its similarity to the teeth of other hoofed herbivores, then picks up the skull of a rock hyrax, a small rodent-like mammal. “This is actually very closely related to elephants,” she says. “You wouldn’t imagine that!”

As with any extensive library, the items in this collection require special care to ensure that they remain in good condition. Sunlight can cause serious bleaching and degradation of feathers and skin, humidity can lead to bacterial growth, and insect infestations can reduce a specimen to powder. Many items are quite old and fragile, and must be handled with care. Recent improvements to storage and preservation, made possible by a generous grant from the Joseph and Vera Long Foundation, include moving the specimens into more airtight cabinets and coating the lab windows with a film that blocks damaging ultraviolet rays.

Even keeping such a working collection organized presents a challenge. Over the past years, several students have been involved in the task of documenting and cataloging every specimen, a necessary project after a series of lab renovations and the construction of the Moore Natural Sciences Building in 2007, during which time the collection was moved several times.

Kong, Susan Anthony ’13, and Chelsea Satterwhite ’13 worked together on many of the specimens. They consulted with the Museum of Vertebrate Zoology at UC Berkeley to learn how to retain color in bottled specimens and how to clean delicate anatomies, using small brushes to carefully remove dust. They also rewrote all of the bird labels—many of which were missing, broken, or illegible— including details of the species, date and place of collection, and the history of the specimen over time, and entered all the specimens into a master list.

“All of us had different knowledge of different taxa, so we collaborated to get the job done,” says Kong. “I’m more knowledgeable in dealing with reptiles and amphibians, for example, while Susan is more familiar with birds. At the end of the day, I learned a lot.”

Lauren Burke continued their work, painstakingly photographing each bird over the course of 18 months, correlating its tag number with a drawer location, and entering all the information into a database. “Everything now has a place, and everything is in its place,” she says. Smith is well on the way towards her goal of completing an electronic database of the entire vertebrate collection as well as a digital image library of all the specimens, so that students can study and refer to pieces in the collection outside of the classroom as well.

“Studying and working with the specimen collection gave me an even greater appreciation for biodiversity,” says Kong. “It’s all really cool stuff. There is something for everyone there.” ◆