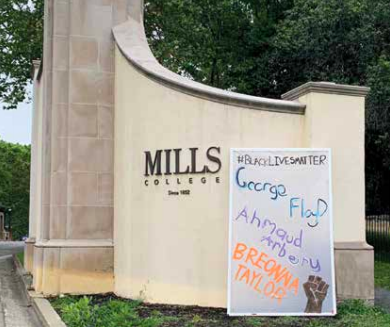 On June 10, President Elizabeth L. Hillman sent an email to the Mills community about the Black Lives Matter movement. In it, she said, “Mills stands in solidarity with the members of our Black students, staff, and faculty and their allies against anti-Black racism, police violence, and racial injustice. In response to the rising Movement for Black Lives Matter (BLM), it is incumbent upon Mills to lead at this critical moment and fulfill our commitment to pursue gender and racial justice. It is essential that our actions have lasting impact and are integral to the fabric of Mills College.”

She also acknowledged that it was a mistake to wait so long to speak out. For some, it was an insufficient response to the resurgent outpouring of grief and anger over racism and police brutality around the world in the wake of the killings of George Floyd, Breonna Taylor, and other Black Americans. As a result, and after meetings with Black faculty, students, and alumnae—including the Alumnae of Color Committee of the Alumnae Association of Mills College—the college officers at Mills are working on a plan to make the College an anti-racist institution.

There have already been a number of immediate changes, including the
official recognition of Juneteenth as a Mills holiday, and the appointment of Associate Vice President for Human Resources Kamala Green to the new position of special assistant to the president for equity and inclusion. But much of the work will be ongoing, including:

• Improving the classroom experience and school support for Black students

• Creating new systems for complaints about racial discrimination on campus

At Mills, 10 percent of undergraduate students and 17 percent of graduate students are Black (compared to four percent on both counts at similar institutions), while 13 percent of faculty and 15 percent of staff are Black (versus four and eight percent, respectively). There are a number of
student-led groups, including the Black Student Collective and Black MBA
Students Group, who have been offering extensive input on the process to make the Mills experience more just and accessible for that population.

The Black student experience played a part in a day of action on Friday,
August 28—the 57th anniversary of Martin Luther King, Jr.’s “I Have a
Dream” speech. Non-essential staff were given the day off and classes were
cancelled after 12:00 noon to give the Mills community a chance to reflect and learn about anti-racism and how it can manifest in the classroom. One
virtual workshop, “The Necessity of Abolitionist Teaching in These Times,”
brought together professors from the School of Education and the Ethnic
Studies Department with Bettina L. Love, the author of We Want to Do More
Than Survive: Abolitionist Teaching and the Pursuit of Educational Freedom.

In the second session, “Generation Z and Racism in Higher Education,”
Associate Provost for Recruitment and Student Success Maggie Hunter offered ways to reframe some common classroom interactions that have prompted student complaints to her office. They included adding context to insensitive racial terms that were once commonly used and acknowledging the racist roots of many fields of study, such as art history and world languages.

Indeed, student activism at Mills has driven much of the College’s recent work, just like it has in other areas in the past. Immediately following Floyd’s death, students who were sheltering on campus erected a scrim at Richards Gate (pictured) that featured the names of Floyd, Taylor, and Ahmaud Arbery. Columns at the gate now boast artwork from alumnae artists of color that tie the College’s continuing efforts in anti-racism to its surrounding East Oakland neighborhoods. The artwork, created by Yétundé Olagbaju, MFA ’20, and Cristine Blanco, MFA ’20, uses the visuals of invasive
and non-invasive plants to symbolize white supremacy in higher education.

If fundraising goals for the project are met, the installation will rotate different creative takes on Black Lives Matter throughout the 2020–21 school year. To support the art project, use the enclosed envelope or visit alumnae.mills.edu/give to make a gift, and add “Front Gate Art Project” to the alternate designation field.

Stay up to date on anti-racist actions at Mills by visiting mills.edu/blacklivesmatter.