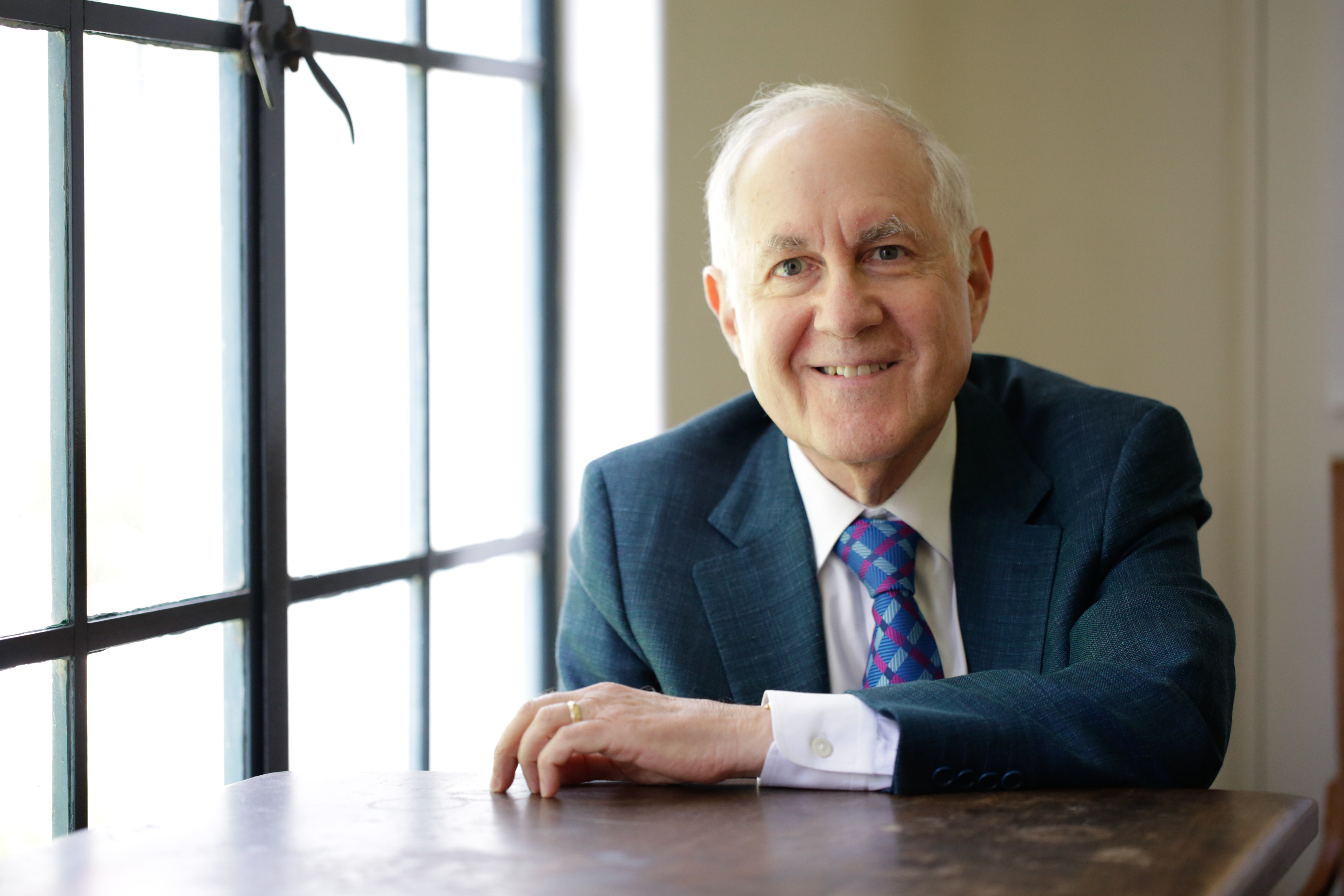 Over nearly half a century as a faculty member, Professor Bert Gordon has made an indelible impression as a knowledgeable and enthusiastic teacher, an experienced and witty colleague, and a great friend and mentor.

Curiosity and enthusiasm have always driven Bert Gordon’s exceptional teaching and wide-ranging research interests. In his long career at Mills, he has sought to convey these qualities to his students in order to give them deeper, richer lives.

“It’s hard for me to imagine Mills without Bert,” says Professor Marianne Sheldon, who joined Bert Gordon as a friend and colleague in the history department in 1975. She has known him not only as a deep source of knowledge, both historical and institutional, but also as a wellspring of wry humor. Thousands of Mills students can share Sheldon’s sentiments: in the nearly half-century since his arrival, in 1969, Gordon has led generations of students through the intricacies of European history. In theory, he could have taught a granddaughter of one of his earliest students, sharing his appreciation for the multifaceted, interrelated, and above all, human forces that have shaped the course of the world. He retired this spring as the longest-serving member of the Mills faculty.

Gordon’s life as a historian seems to have been inevitable. “As far back as I can remember, I was always interested in history,” he says. “When my childhood friends were busy cheering on the local sports teams in New York City, where I grew up, I was reading books on the histories of the teams. As a child I devoured our family copy of the World Book Encyclopedia, reading article after article with my father before going to sleep each night.”

As a young man, Gordon found himself drawn to European history, especially that of Central Europe and France, natural areas of attention in the post–World War II era. He was further influenced by his secondary school teachers who had emigrated from France and spoke of their earlier lives there, as well as by European students he met after enrolling at Brooklyn College in 1959.

When one of his undergraduate professors focused on the conflicts citizens experienced during England’s 17th-century civil war, he saw a parallel in his father’s desire to support a New York teacher’s strike in 1962 but not to partake in illegal strike activities. “In her class I learned about the often complex struggles people undergo in making political choices, and I also saw how an excellent professor can make history relevant to her students,” Gordon says.

He learned, too, that conveying the complexities of history often boils down to a matter of selection. “What makes history perpetually interesting,” he says today, “is that the historian’s necessary process of selection itself changes over time. A history of any topic written now must be different from a history written 50 or 100 years ago; the telling of history always reflects the time and place and background of the teller. Consequently, it’s always a process of whittling out and trying to focus on a few themes in order to determine what makes it all meaningful.”

“I grew up in a family whose political views ranged from moderate to quite liberal, and I came of age during the 1960s, when many of my student associates were involved in the political Left,” says Gordon. The academic embrace of the Left, as an ideology and a focus of study, piqued his curiosity about the ‘other side’: the Right, and particularly the fascist movements of the 20th century. “I wanted to try to discover patterns of authority and their attraction for followers, which I saw as deeply ingrained in both American and European society.”

He enrolled in graduate studies at Rutgers University based on his desire to work with Professor Robert Kann, an expert on the Habsburg Empire and a refugee from the Nazi regime; completed his doctorate with a Fulbright scholarship to conduct research in Vienna; and examined the role of the lower middle classes, or petite bourgeoisie, in radical revolutionary movements.

Gordon’s interest in the hard-right fascists eventually led him to focus on the World War II French “collaborationists,” those who were ideologically aligned with Nazi philosophy, rather than those who cooperated with German forces as a matter of economic benefit, self-preservation, or social convenience. During several research trips to France, he interviewed some three dozen people who had been involved with collaborationist groups. The result was his book, Collaborationism in France During the Second World War, published by Cornell University Press in 1980.

“I sought to study the personalities of the collaborationists and how their innate characteristics emerged in times of crisis during the interwar and wartime years. I wanted to profile the ‘other,’ the true believer,” he says. What he found was both disturbing and perplexing. “I was treated very kindly by virtually all of my interviewees,” says Gordon, yet anti-Semitism and anti-Communism were constant topics of discussion, and none of his subjects expressed any regret about the atrocities of war. Moreover, several interviewees were eager to talk about their wartime experiences in hopes that their stories would become more believable if told by an American too young to have been involved in the war.

“I learned that lining up personality types with political convictions was more complex than I had originally thought,” he says. “Years later, I still struggle to reconcile their gracious behavior toward me with their wartime actions.”

Gordon’s research and scholarship is marked by an innate curiosity and a willingness to follow any line of inquiry wherever it may lead. His secondary research focus, though one for which he is perhaps equally well known, is the study of food history. He first encountered the notion when studying at Rutgers with Professor Traian Stoianovich, a proponent of analyzing history from a broad social and cultural perspective. “Stoianovich opened my eyes to the fact that the story of the human past is far richer than only its political history,” says Gordon. “I came to appreciate the significance of meals and their preparation, religion and food taboos, and gender and social status in the preparation and consumption of meals.” What and how people eat reflects economic patterns, political power, and social attitudes. And, he says simply, “It’s interesting!”

A growing awareness of the role of the everyday would orient all of Gordon’s subsequent work. His paper on California cuisine, published in 1986 by the Revue Française d’Études Américaines, shows his wide-ranging grasp: he cites sources including conference speakers, cookbooks and restaurant menus, display ads in telephone books, in addition to academic papers and economic reports.

At Mills, Gordon’s teaching has kept pace with his eclectic research. Although hired initially to teach German history, over time his course offerings have expanded to include general European history, along with the history of France, Spain, England, and Russia. “You’d imagine that someone who has taught for 49 years might just recycle their old yellowed notes—but not Bert,” says Sheldon. “One of the things that’s most impressed me is his willingness to adapt, to change, to use new technology. He’s been creative and responsive to student needs, and has evolved his thinking over time.”

Gordon has also led classes on cuisine history, Marxism, travel and tourism, and the history of Mills College itself—a course that then-President Janet Holmgren requested he develop to mark the College’s sesquicentennial in 2002.

And yet he missed the event that defines the modern history of Mills: Gordon was on sabbatical in Europe during the 1990 Strike. In those pre-Internet days, he heard about the anti-coeducation protests from Shlomo Ben-Ami, a historian on fascism who was then serving as the Israeli ambassador to Spain (and later became Israel’s foreign minister). Gordon recalls feeling that things had changed when he returned to Mills for the fall semester. “There was a heightened awareness that this wasn’t just a first-rate college, but a first-rate women’s college,” he says. “It made me work harder to make sure my courses covered gender history. And it affected not just how I teach, but how I think. I became much more aware of women’s issues—though I hate to call it that, because they’re really everybody’s issues.”

Though Gordon has officially retired from the College, he will maintain an active involvement with Mills. He plans to teach his food history course next spring, and will continue to be an advisor to Phi Alpha Theta, the national history honor society, and to other students as an academic advisor.

He also will be able to spend more time with his wife, Suzanne Perkins, who is an accomplished artist. His new book, tentatively titled “War Tourism: Second World War France from Defeat and Occupation to the Creation of Heritage,” is scheduled for publication by Cornell University Press in November. And he will continue to lead Osher Lifelong Learning classes, as he has for many years, and to be active with the tourism studies working group at UC Berkeley and the International Commission for the History of Travel and Tourism.

Looking back at his long campus career, he says: “How can you not fall in love with the Mills campus? It’s gorgeous, like a botanical garden.” He points out that he has been present though the enormous changes in the social composition of the College over the past half century—its increase in ethnic diversity, the greater number of resumer students, and significantly larger percentage of first-generation students—all of which, he believes, have deeply enriched the college experience for everybody, teacher and student alike.

His students over the decades have been grateful: “Professor Gordon was my favorite at Mills,” said one. “He’s extremely kind, helpful, funny, engaging, and really cares about his students.” A history major who took 9 of his classes said she “loved every one. He’s is on top in his field and knows more about history than any other person I’ve met.”

The last word belongs to Bert Gordon: “It’s hard to express the joy of interacting with colleagues and, especially, students.” he says. “It’s been nearly half a century and the students continue to be fantastic—not just their academic quality, but their quality of character. They are bright, industrious, motivated, and serious about their work. And the ongoing value of Mills is that we do a great job of educating students from all kinds of different backgrounds so that they can have deeper, richer lives.”