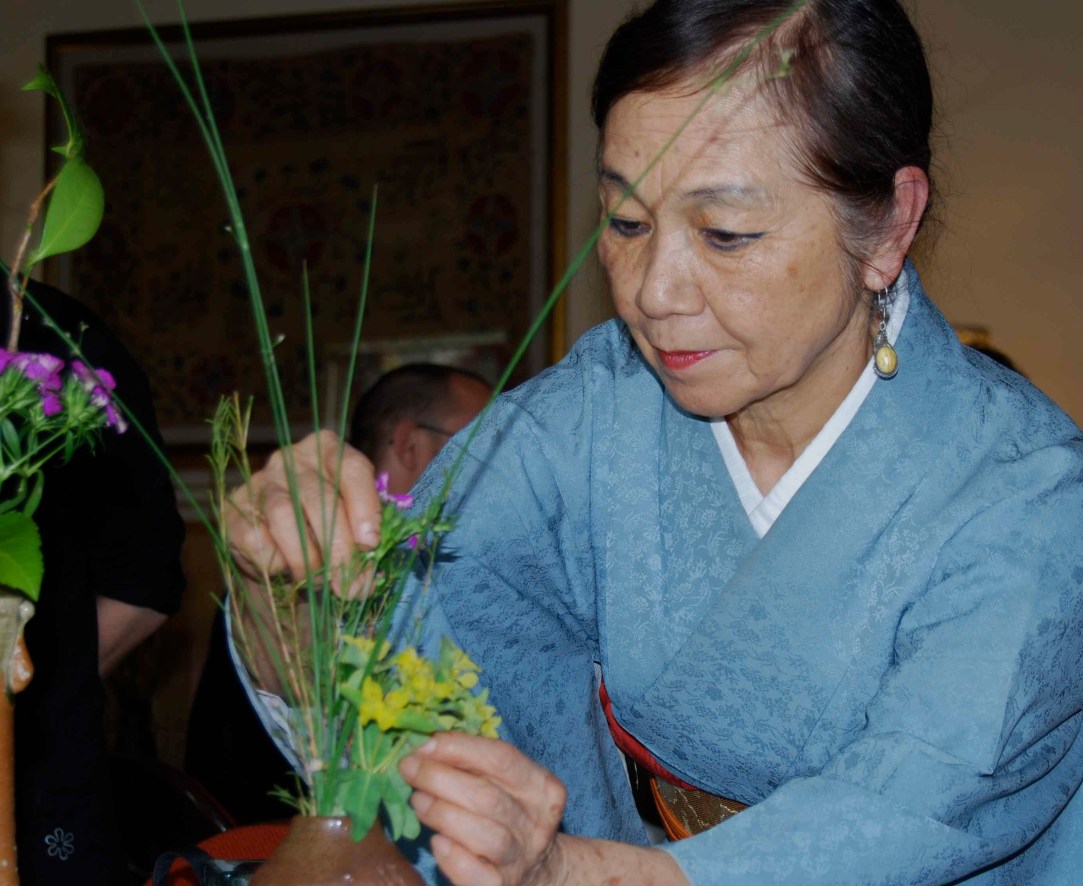 “We were college students who needed to earn money. We thought that if we started a restaurant, at least we would have enough to eat,” jokes Yoshie Akiba, MFA ’76, about the founding of Yoshi’s Jazz Club and Japanese Restaurant with friends Kaz Kajimura and Hiroyuki Hori.

Surrounded by the lush flowers of her Rockridge garden, the lithe, diminutive dancer peers out from beneath a white cowboy hat that shades her eyes from the afternoon sun as she recalls the restaurant’s earliest days in 1973.

“Kaz was a journalism grad student, working for UPI [United Press International]. Hiro was an art student, and I was studying painting at Berkeley,” she says. “We opened a small place in the back corner of a food court just north of the UC campus: Hiro cooked, I waited tables, and Kaz would come back from his job in the city to wash dishes and clean up.” The three owners decided that most patrons would find it easier to pronounce “Yo-shi,” and so left the final “e” off of their restaurant’s name, she explains.

I can only image how exhausting it must be to run a restaurant while taking college courses. Not for Akiba, who, after a full day of work and study, would head to San Francisco with her friends. “We were big fans of jazz. Often after closing we would drive over to North Beach to catch the act playing at the Keystone Korner.”

It’s not at all surprising that the art student would also be a jazz aficionado—in fact, Akiba’s life has long been saturated with arts of all varieties. She holds a master’s degree in dance from Mills (and still performs regularly) and is skilled in ikebana flower arranging, calligraphy, and tea ceremony.

When the restaurant moved, expanded, and evolved in 1977, Yoshie and Hiro decorated the building’s exterior with an eyecatching mural of purple irises. “Someone suggested there was a building available on the corner of College and Claremont in north Oakland. I went over to check it out and thought, ‘This is it— this is the place!’ So we moved, put in a sushi bar downstairs and a dance floor upstairs. That way I could take time off from work and go listen to the music,” Akiba remembers. Live Latin bands provided an upbeat soundtrack for dancing at the restaurant.

Whether as a result of the irises, the dancing, or Hiro’s masterful cooking, Yoshi’s on Claremont quickly became a victim of its own success. As its popularity grew, neighbors disgruntled by the crowds and parking problems convinced the authorities to revoke the club’s invaluable liquor license. Faced with potential financial ruin from loss of liquor revenues, not to mention a decline in customers, Akiba thought up a bold plan to bring in a new set of clients.

Reformatting the restaurant’s floor plan, she and her partners created a music venue, hired an experienced booking manager from Chicago, and started bringing in world-class jazz bands. Within a short time, some of the biggest names in jazz were showing up to play at the modest Rockridge sushi bar. By the time the restaurant’s liquor license was restored, it had become known as one of the most desirable spots in the country to both perform in and listen to quality jazz.

“So how did you become interested in jazz in the first place?” I ask. Yoshie squints quizzically from beneath the cowboy hat. “I mean, how did someone growing up in post-war Japan become a fan of American culture, American music?”

“You have to understand,” Akiba begins. “Japanese women benefited from the American occupation. Women had always been kept at home and, for the first time, were being offered not only new educational opportunities, but actual jobs working for the military.”

Apparently, Americans also introduced their culture directly into the foster home where Yoshie resided. Shortly after the end of World War II, her widowed mother had placed the five-year-old Yoshie in a facility run by the daughter of a wealthy businessman. “There wasn’t very much food available after the war,” Akiba continues, “so I had to go down to the seashore to collect edible seaweed to sell in the marketplace.”

To raise money for the home, some of the teachers at her school had organized a dance hall for the wives and officers living at a nearby American naval base. “The single men, of course, liked to come and dance with the teachers, who were all very intelligent, educated women. That was in the evening,” says Yoshie. “But before the dancing started they had me get up and entertain. I would sing songs like ‘Come On-a My House’ [Rosemary Clooney’s first hit tune] and improvise dances. The sailors would give me candies and chocolates and chewing gum. I learned all the popular American tunes.”

Yoshie was exposed to more than just pop culture. One of her instructors taught contemporary modern dance; their troupe performed at the local high school. Then, while studying Japanese tea ceremony near Tokyo, she met the American brother of one of her classmates, a classically trained pianist fulfilling his military service as a naval officer. She won his heart, the two married, and he brought her back to the States.

“I made him promise that he would let me study dance if I came to America,” Akiba says. With her husband on the faculty at Peabody Conservatory in Baltimore, she learned music and dance from some of the best teachers on the East Coast.

But Yoshie was too free-spirited for a conventional marriage. “A friend told me about what was happening in Berkeley,” she says, and the lure was irresistible. In time, she packed her bags and fled to the Bay Area.

She found work as a seamstress for a local designer, then enrolled in painting and dance classes, first at Merritt College, then at UC Berkeley. And while her artistic talents helped make the restaurant a success, it did not fully satisfy her need to perform. So in 1975, she enrolled in Mills’ graduate dance program, earning her MFA in 1976.

During her Berkeley days, Akiba had become re-acquainted with the values of her Japanese heritage, ironically, through the writings of Sausalito-based Alan Watts. Her tea master from Japan had also moved to northern California, and they were able to reconnect.

Today she lives at a Zen meditation center in Rockridge with her Zen-master husband, Gengo Akiba. The teachings of Zen Buddhism permeate her philosophy on life and business: “We believe in certain values: goodness, truth, generosity, and beauty,” she says, and those values clearly underlie every aspect of the way that both customers and performers are hosted. No wonder Yoshi’s (now with two locations in Oakland’s Jack London Square and the Fillmore District in San Francisco) has come to be considered among the most desirable performance venues for world-class jazz musicians.

And as one of the Bay Area’s favorite gathering spots, Yoshi’s has unintentionally given rise to something even more valuable. In a world filled with discord, people of every ethnicity and persuasion check their differences at the restaurant’s door, and crowd around the bar’s tables to nibble sushi and drink in the jazz. Akiba demures, “We didn’t think in terms of improving race relations when we started the club. We just wanted everyone to enjoy the music.”

Nina Egert, MA ’80, has her photo exhibit, Yone Noguchi in California: A Japanese Poet Among Oakland’s Famous Writers, on view through January at the Oakland Asian Cultural Center