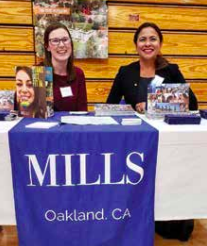 Mills College’s Office of Admissions and the AAMC have launched a program that enables alumnae volunteers to play a key role in recruiting undergraduate students across the country. Since the program’s debut in fall 2019, 19 alumnae volunteers have represented Mills at 18 different college fairs in California and Massachusetts. They have spoken with dozens of prospective students about their time at Mills and their professional accomplishments after college.

Julia Almanzan ’92, president of Los Angeles Mills College Alumnae, is one of these volunteers. She believes that “more alumnae involvement ultimately results in better recruitment of students and better retention,” she says. “Students who really know what to expect are more likely to want to stay.” Alumnae make excellent recruiters, Julia adds, because “Mills alumnae have the enthusiasm and a passion that cannot be bought or faked. Mills alumnae truly love the school, and that love is infectious.”

Los Angeles–area Mills alumnae courted Julia as a prospective student in the late 1980s. Julia says these alumnae are now like family to her, and she went on to recruit prospective students herself starting in 1997 as a participant in the Alumnae Admissions Representative
Program (AAR), designed by Diana Odermatt ’60. Mills has a history of engaging alumnae to recruit prospective students that goes way back to the early days of the College, but its first formal program started in 1932. Mills hired Diana in 1977 to overhaul the existing program
and give it more structure. What was originally a six-month hire turned into a 10-year tenure for Diana. She eventually became dean of admissions.

The AAR Program sought to create and maintain a network of informed alumnae to assist the College in recruiting and retaining successful Mills students. It worked to improve the visibility and image of Mills College among high school students and college counselors, and to provide feedback to the Office of Admissions on the concerns of prospective applicants and their parents.