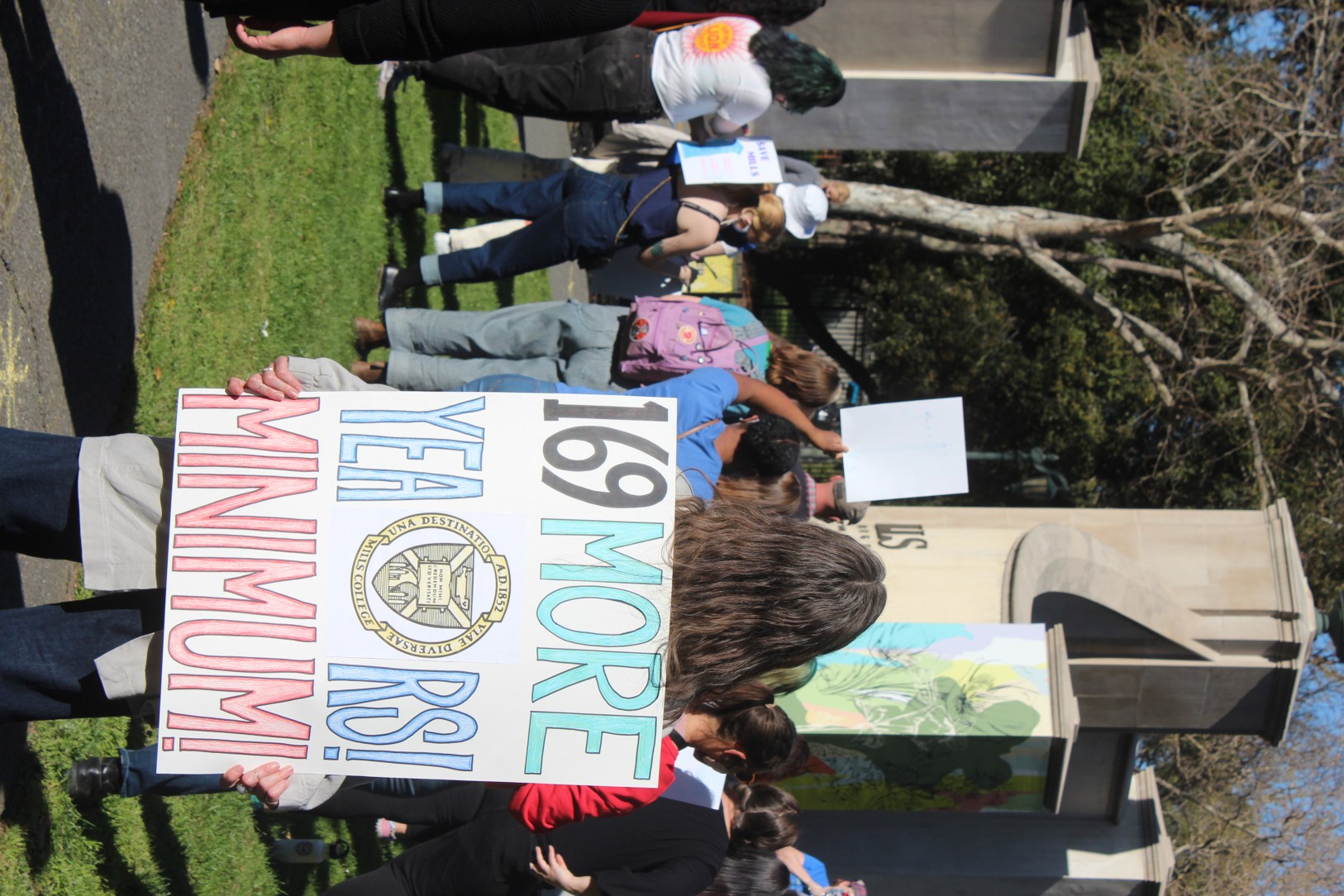 Alumnae fight to save Mills

Note: This story was written before the June 17 announcement of a potential partnership with Northeastern University.

On March 17, Mills College President Elizabeth Hillman announced, on behalf of the College’s Board of Trustees, that this fall’s first-year undergraduate class would be the last to enroll at Mills and that the College was beginning a transition into a heretofore undefined Mills Institute that would not have any degree programs. The email announcement also declared that Mills would likely confer its final degrees in the spring of 2023.

For many alumnae, students, faculty, and staff, this was a startling revelation. That Mills has endured financial difficulty in recent years was not news. Enrollment has significantly decreased over the last seven years, and the College announced a Financial Stabilization Plan in 2017, which included laying off tenured faculty. Last year, the College sold a 1623 Shakespeare First Folio to reduce its budget deficit, but the COVID-19 pandemic exacerbated financial and enrollment hardships. Nevertheless, the possibility that Mills College’s doors might close for good did not seem imminent to the Mills community before March 17.

Of course, Mills has a history of students and alumnae organizing to reverse a Board of Trustees decision. The 1990 Strike in response to the decision to go co-ed looms large in the minds of Mills community members now as they mobilize once again to save the College.

Is Partnership a Way Forward?

The closure announcement was especially surprising because it made no mention of the “expanded partnership with UC Berkeley” President Hillman had been talking about for almost a year leading up to the announcement. On June 25, 2020, Hillman mentioned the potential partnership during a videoconference with a large group of alumnae donors. The videoconference instigated several alumnae-led efforts to share information about the College’s plans.

The Board of Governors of the Alumnae Association of Mills College (AAMC)—an independent nonprofit representing all 26,000 alumnae—immediately began contacting alumnae leaders to apprise them of the partnership news and plan a virtual town hall, held on September 17, 2020, to elicit more details from the president. During the town hall, President Hillman emphasized that negotiations with UC Berkeley were in the early stages, but hinted they could result in a merger that would preserve the College’s educational mission. No mention was made of Mills closing its doors. While no further word on the status of this partnership has come from the College, representatives from UC Berkeley have toured the campus several times this academic year, and UC Berkeley Chancellor Carol Christ mentioned the possibility of a partnership agreement at a recent meeting of the University of California Board of Regents, which would need to approve it.

Around time of the June 25 videoconference, Jennifer Gallison ’97 realized that many of her peers were less than informed about what was happening with Mills. Gallison, Lisa Kremer ’90, and other friends launched a Facebook group, Strong Proud All Mills–Mills Alum Network (SPAM), on June 30, 2020. It grew like wildfire and now comprises 2,500 members.

SPAM’s primary objective is to keep Mills alums informed, in real time, about everything pertaining to the College and its future. “We’ve tried to encourage all points of view, though it’s difficult to find anyone to speak up for the institute concept,” Gallison said.

The AAMC Reacts to the Institute Concept

The March 17 closure announcement spurred alumnae efforts into high gear. The AAMC held another virtual town hall on March 24, attended by more than 600 Mills alumnae, and fielded an email survey to gauge alumnae reactions to the announcement. Based on the feedback received, the AAMC Board of Governors sent a letter to the College’s Board of Trustees on April 2 with several demands, including:

• An immediate halt to the transition into an institute

• Exploration of alternative paths to save Mills

In the letter, the governors stated: “We reject the conclusion that the financial challenges Mills faces—although profound and persistent—require the College to be dismantled and transformed into an institute.”

The AAMC has urged alumnae to make pledges to support the College contingent upon it remaining a degree-granting institution. It has also engaged a legal team to explore means of saving Mills.

Over the years, Mills College has come to serve an increasingly diverse population. Students of color now account for 65 percent of undergraduates and 55 percent of graduate students. The AAMC recently adopted an antiracism statement supporting diversity, equity, and inclusion as fundamental principles for the organization. As a standing AAMC committee for more than 30 years, the Alumnae of Color Committee (AOCC) has mentored and supported students, alumnae, faculty, and staff of color; created an endowed scholarship fund; and consistently intervened in a long history of racism and discrimination at Mills.

In April, the AAOC queried its membership and found that memories of microaggressions and systemic discrimination still sting for many alumnae, and views vary about how Mills should move forward. However, there was broad consensus that a Mills degree has value, and that the Board of Trustees must: 1) take the time necessary to explore all options for a fiscally sound, degree-granting, antiracist educational institution; 2) ensure that all current students can graduate by 2024; and 3) support faculty and staff in the transitions ahead. Any new model must be grounded in antiracist principles and best practices. AOCC Co-Chair Gwen Jackson Foster ’67 said, “We’re ready to work hard for an improved Mills.”

Another group that is re-envisioning a sustainable Mills is the Save Mills College Coalition, started the very day of the College’s closure announcement. Paige Chamblin, MBA/MPP ’21, a brand-new Mills graduate and alumna of Sweet Briar College who participated in the successful campaign to save that school from closure in 2015, formed the Save Mills Facebook group “to organize current students and alums to reverse the decision.” The Coalition grew from there, now claiming 1,900 members in its Facebook group and 300 active volunteers.

The Coalition’s mission? “To stop the proposed closure of Mills College and investigate all appropriate options that could continue it as a degree-granting college, prioritizing options that maintain Mills as a college for women, non-binary, and transgender students.” A rally at the Mills gates on March 26 was the Coalition’s first public action, drawing in community supporters and press coverage.

The Coalition includes current students, alumnae, current and former tenured and adjunct faculty, staff, family members, and other friends of the College. The group has reached out to elected officials, Mills trustees, and UC Regents, and it has coordinated social media campaigns, video campaigns, and public comment at open meetings.

The Coalition has also taken steps on the legal front, raising funds online to engage a law firm. On April 23, the Coalition’s lawyers sent a memo to the California attorney general asking for an investigation into what they determined was an unlawful decision to close the College.

While many feel strongly that Mills should remain a private college, others are developing a model for keeping the College alive as UC Mills. “The concept of UC Mills is not related to UC Berkeley in any way,” said Julia Almanzan ’92, one of the organizers behind the campaign. UC Mills would be owned by the state under the UC Regents umbrella while being a standalone, self-governing institution. A UC Mills would also no longer be a women’s college (public colleges must be open to all), but rather a “poly-ed” institution. Inspired by UC Hastings College of the Law, UC Mills would have specialized admissions, allowing UC Mills to focus on underrepresented populations and preserve what keeps Mills special while being a public school. “In a world that is now embracing the spectrum of gender expression, even the term ‘co-ed’ no longer applies. By opening admission for all genders and fostering inclusion, diversity, equity, and social justice, UC Mills can forge a new ‘poly-ed’ path,” Cherlene Sprague Wright ’92 says.

Almanzan and Wright are among several dozen UC Mills Campaign organizers—including alumnae, former College trustees, and current and former AAMC governors—who are lobbying UC regents and other leaders to consider a UC Mills. Organizers say a UC Mills could help the UC system include more diversity in its student population. The UC Mills website states: “UC Mills will be able to introduce a new kind of college to the UC system. With high numbers of BIPOC, LGBTQ+, and disabled students, Mills gives the UC system something it is currently criticized for not having: representation.” Mills would, in turn, benefit from the UC infrastructure: databases and technology; healthcare options for faculty, staff, and students; a large applicant pool; and student outreach.

Alumnae Won’t Take “No” for an Answer

Although they propose different solutions, the UC Mills Campaign and Save Mills College Coalition concur with the AAMC on a basic set of goals resembling the key demands in the governors’ April 2 letter to trustees. The three groups came together around these goals in a joint letter sent to the Board of Trustees on April 13. A month later, at the board’s May 14 meeting, the AAMC presented proposals created by the Save Mills College Coalition and the UC Mills Campaign to make Mills financially sustainable as a college.

One central truth all mobilized alumnae agree on is that many of those with the most to lose and with valuable insights into Mills’ financial and enrollment problems have been shut out of College trustees’ discussions around how to address these problems. Pleas for transparency and collaboration have thus far gone unanswered.

On May 3, Mills faculty announced that 73 percent of its voting members approved a resolution of no confidence in College leadership. Unions for staff and adjunct faculty, backed by the Service Employees International Union, continue negotiating fair compensation for long overworked and underpaid staff and for adjuncts at risk of losing their classes.

As this article goes to press, staff, faculty, and alumnae are still seeking information on the College’s partnership negotiations with UC Berkeley and the place of a Mills Institute in such a partnership. During a UC Regents meeting in May, several Mills alumnae spoke during the public comments segment, asking the regents to cease negotiations with Mills. UC Berkeley Chancellor Christ noted that if an agreement were reached between the regents and Mills College, it would be addressed at the July 21–22 UC Regents meeting.

Mills College has inspired its alumnae and the wider community to mobilize and act in this moment, and they will not back down without a fight.

–Thank you to Jennifer Gallison ’97 and Lisa Kremer ’90 for their input.