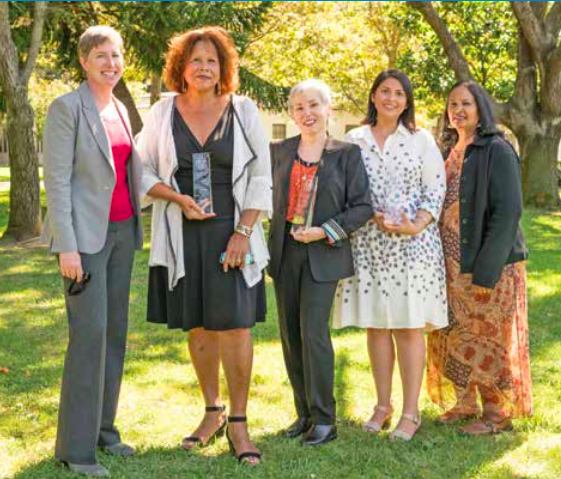 Outstanding Volunteer Award: Pierre Loving ’77 has been serving the AAMC since 2011. As Nominating Committee chair, she overhauled and streamlined the process of selecting governors and alumnae trustees, including initiating online voting. Pierre has spear-headed multiple successful fundraisers for the AAMC and the College, usually incorporating her deep love of jazz. She essentially single-handedly oversaw every detail of the renovation of the Reinhardt Alumnae House kitchen, and in her honor, the AAMC named it the Loving Kitchen. Alongside these projects, Pierre diligently oversaw the financial health of the AAMC endowment while serving on the Finance Committee, managed the Executive Committee, and recognized the work of others on the Awards Committee. Pierre states, “Receiving the 2019 Outstanding Volunteer Award from the AAMC was not as much of an honor for me as serving the College as a member of the Board of Governors along with so many other outstanding alumnae.” Her service cannot be fully illuminated by the number of years she’s been making con-tributions nor by the numerous committees on which she’s served. Pierre’s impact goes far beyond mere metrics, and the AAMC thanks her for her tireless dedication.

Recent Graduate Award: Daisy Gonzales ’07, as president of the Associated Students of Mills College, helped other students understand the power of their voices through student government. A former foster child, Daisy not only defied the odds against foster youth by graduating from college (only 10 percent do) but also went a step beyond, completing a PhD in sociology at UC Santa Barbara. While earning her doctor-ate, Daisy helped high school foster youth create an advocacy club to break down the stereotypes they face. Daisy has served as vice president of the Santa Barbara Women’s Political Committee and co-founded the Santa Barbara Latina Leaders Network. She became deputy chancellor of the California Community College system in 2018. In that role, she’s developed a new online college option, CalBright, a timely response to California’s labor challenges. Daisy has clearly demonstrated her commitment to providing educational access to historically underserved communities. She possesses the ability to build teams and communities to create positive change. A Mills education is all about discovering how you can improve the world, and Daisy is an accomplished example of that.

Distinguished Achievement Award: Lauren Speeth ’81—author, filmmaker, educator, and social entrepreneur—has a lifetime of experience with companies ranging from startup to Fortune 500 levels. Lauren was named one of 40 Women of Influence by Saint Mary’s College in 2010 and has received two honorary doctorates. She’s earned degrees ranging from an MBA to doctorates in business and ministry, in addition to completing training and certifications in homeopathy, computer security, philanthropy, clinical pastoral education, and college teaching. Through her company Elfenworks Productions, Lauren has created critically acclaimed films, books, music, and multimedia, becoming much sought-after as a public speaker. At the heart of Elfenworks’ mission is a drive to uplift and engage students in their efforts to speak out and act for a better and more hopeful tomorrow. Lauren’s accomplishments reveal an unquenchable curiosity about the world and an unmatched depth of empathy for the beings in it. She says, “As I add receiving this award to my internal memory chest, I find myself thinking about how enriched my life has been because of Mills: treasured moments, cherished friends, and an education that prepared me for the many unexpected turns in my career path.” In light of the ripples she makes, impacting all who know her, the AAMC is proud to honor Lauren with this year’s Distinguished Achievement Award.