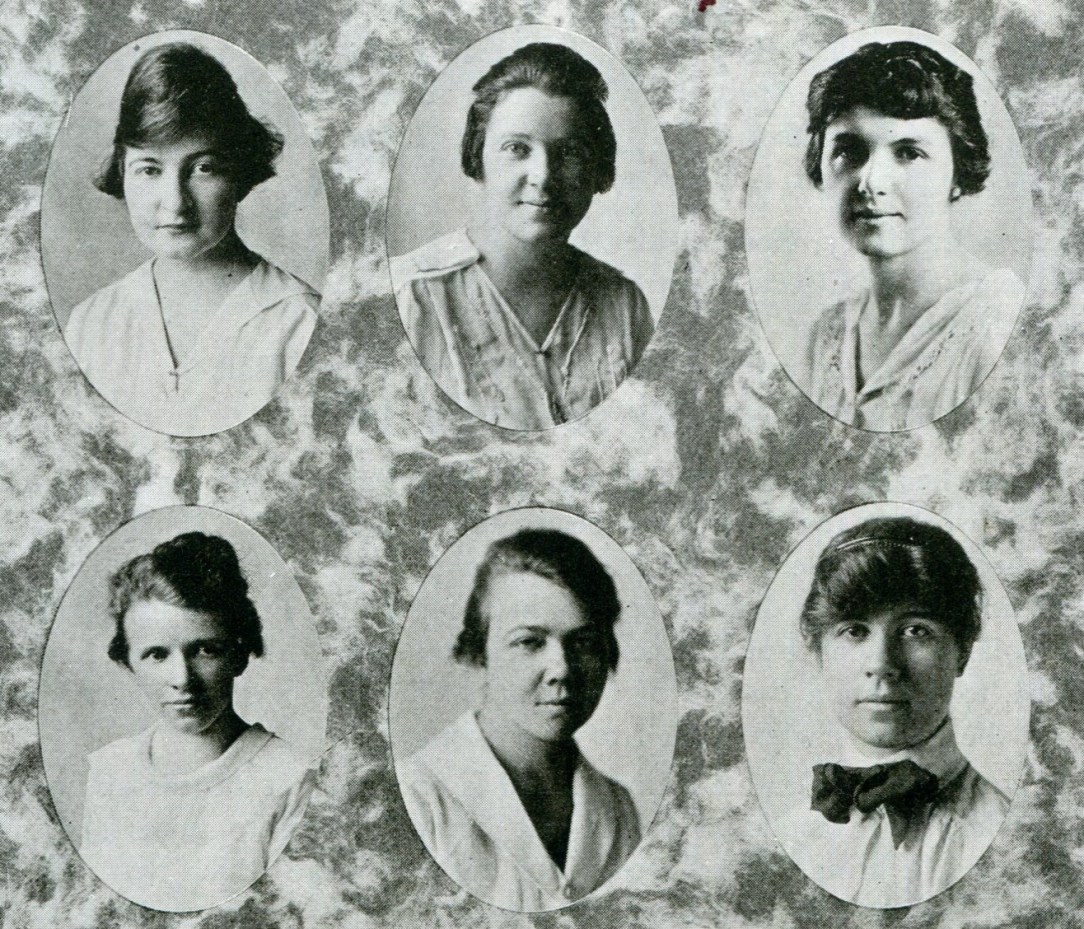 Mills Weekly, Mills Stream, The Campanil—they all trace their roots back to the fall of 1917.

To celebrate one of the oldest student publications in Mills history, the Quarterly takes a look at the notable changes and advancements in the century-long history of The Campanil.

Beginning in the fall of 1917, as the leaves changed colors and the weather grew colder, Mills College also bustled with change: The first-year Class of 1921 had just arrived on campus, new classrooms in Mills Hall opened their doors for the first time, and College Hall boasted a fresh coat of paint and upgraded conveniences. But amidst all these changes, a humble newspaper made its own debut. Before it was The Campanil as we know it now, the first issue of the Mills College Weekly was published on September 4, 1917, overseen by chair and editor Hilda Clute (Class of 1918) and a small team of nine student managers—some of whom are pictured above.

This four-page paper sprung up in response to the rapid growth of the campus. Registration had increased, new departments were added, and even a new dormitory had been built. Mills was expanding, and so too did the distance between different aspects of campus life. When the 1919 yearbook, The Mills Chimes, reflected on these times, it noted: “The College family became a little broken up so that each no longer knew what the other was doing.”

The previous student publication, Mills College Magazine—a literary magazine that began in 1909—had recently been discontinued, which meant that the campus now lacked a means to convey campus news. But Mills didn’t need another literary magazine; it needed a publication to unite the larger campus body.

Thus, the Weekly was born.

As its first introduction, the front page of the newspaper gladly greeted new readers with a personal welcome from President Aurelia Reinhardt to the incoming students. In the editorial meanwhile, the board of managers proudly expressed its excitement and bold visions for this paper, even declaring: “We are going to endeavor to be so fine and strong that Dr. Criticism need never do more than Watch us Grow.” (Emphasis in original.)

What clearly set the Weekly apart from other local newspapers at the time was its spunky but genuine voice—a light-hearted element that would continue to persist in the attitudes of future staff members for years to come.

One of the student managers, Dorothy Calef (Class of 1920)— who would later become the main editor in 1919–20—wrote in the first alumnae-helmed issue of the Quarterly, published in April 1918: “By reporting college affairs […] the Weekly hopes to keep the Alumnae, Faculty, and Student Body informed of campus doings and thus help bring them together.”

Bolstered by the efforts of these students, the newspaper rapidly grew. By 1922, the newspaper had enlarged in size and upgraded the quality of its paper, and the staff had grown to “20 staff members, 10 reporters, and four assistants,” according to an October Weekly article that same year. Advertising was also introduced to the newspaper in September 1921 to help pay for expenses. In 1923, the newspaper began to report on outside affairs in hopes to bring together the interests of the expanded Mills community, especially as the alum body grew.

Despite this decision, the editorial team continued to largely focus on college stories, aiming to uphold Mills ideals to the best of its ability. By then, the newspaper had cemented its own place in Mills’ legacy.

Over the next few decades, the newspaper staff continued to build upon the foundations established by the original members, and they even developed their own traditions and charming quirks. One article in 1941 described how every Weekly dinner had a checkerboard cake as a necessary feature, and that the staff would present awards to outstanding members at the college picnic in June.

But not every newspaper tradition would last (such as the checkerboard cake, regrettably), and even the most rock-steady attributes of the paper weren’t safe from change. After all, the newspaper was dedicated to being true to the spirit of Mills, even if that meant shaking things up.

In 1958, the new editor, Tanya Wood ’60, and her team made the decision to rename the paper to The Mills Stream. In her editorial letter, Wood described how previous editors had been eager to rename the paper to something less misleading—by this point, the newspaper had changed to a bi-weekly schedule. Of the 50 suggestions submitted by board members, two were the finalists: El Campanil and The Mills Stream. The latter was selected. “The Mills Stream contained more meaning pertinent to the students, faculty, alumnae, trustees, and administration,” Wood wrote.

Yet, the change wouldn’t stick—in January 1986, the name was changed back to the Weekly. According to Cheryl Reid-Simons ’87, who was the student editor at the time, the newspaper team believed they had enough news and staff members to switch back to a weekly publication. “We opted for [Mills College Weekly] both as a nod to tradition and, frankly, a way to ensure that at least medium-term, no one could take us back to a bi-weekly publication,” she says.

Additionally, the staff itself underwent some major upgrades that same year. Its members obtained their first computers to use for the newspaper, and the team moved offices from an annex at the back of Mills Hall into the Cowell Center. “Despite finally getting computers, we still had to get [the newspaper] typeset, which involved dropping a copy off with a lovely woman just down MacArthur Boulevard,” Reid-Simons recalls. “The paper had tremendous support from [the ASMC]–we asked for funding for a new light table to do layout, and to our surprise they gave us more than we asked for. So we got two light tables and scads of border tape.”

Of course, not every upgrade was work-related. The staff still had their moments of fun, just as their predecessors did. “Our unofficial motto, printed on sweatshirts, was: ‘I like it. It’s original. Let’s go with it.’” Reid-Simons mentions fondly. “I have no idea, in hindsight, why we thought that was so funny, but we did.”

The newspaper made its last move, to Rothwell Center, in the 1990s, and its last name change in 2007. On September 4—coincidentally, the same day the very first issue was published 90 years earlier—The Campanil welcomed the new fall semester with its new name. “We are retooling ourselves to have a stronger and more meaningful presence on campus,” the editorial announced.

The name wasn’t the only significant transition the newspaper went through in the past century—the technology advanced too. In an article in the spring 2012 Quarterly, Jessica Langlois, MFA ’10, wrote how the staff evolved from using “photo-sizing wheels, exacto knives, and waxers to lay out the newspaper by hand” to utilizing modern desktop publishing software. This transition was overseen by then-faculty adviser, Professor of English Sarah Pollock. Additionally, The Campanil website has seen significant growth since its inception in 2003.

It’s not surprising then that the student staff of editors and reporters have received tremendous praise for their efforts. By 2015, The Campanil had won more than 20 different awards for its reporting and website, and the newspaper has been recognized at multiple conferences hosted by the California College Media Association and the Associated Collegiate Press.

Today, The Campanil continues its time-honored promise to report campus news and student stories. “Although The Campanil is funded by the ASMC and has a faculty adviser, it is an independent, student-run newspaper that represents the Mills students’ voice,” wrote Emily Burian ’18 for The Campanil’s 100th anniversary article in May 2016. The current header of The Campanil newspaper proudly echoes these sentiments: “Keeping in time with the Mills Community since 1917.”

While the newspaper has undergone large and small transformations over the years, including name changes, the transfer to a digital platform, and even the start and end of treasured staff traditions, some core aspects would never change. Namely, the stories and voices of the student body remain at the heart of the newspaper, thanks to the tireless work accomplished by generations of reporters and staff members.