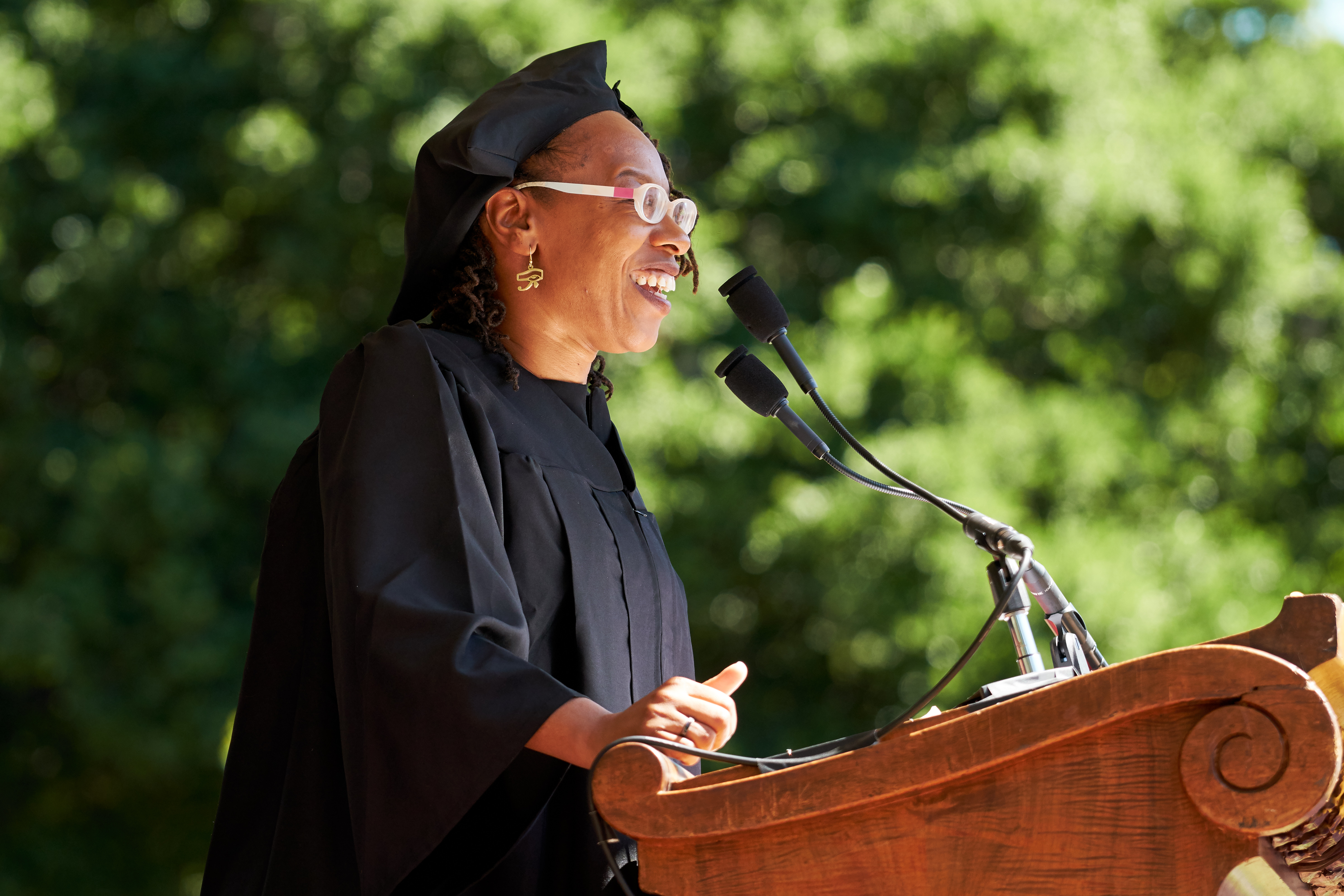 A Lexicon of Justice

Before she ever enrolled at Mills, Lateefah Simon ’17 had helped hundreds of people escape poverty and incarceration through her work as an advocate and organizational leader. Her time on campus gave her the language and the knowledge to effect even greater systemic change.

“When I was 18, the last thing I was thinking about was going to college,” says Lateefah Simon ’17, a nationally recognized advocate for civil rights, racial justice, and criminal justice reform. “I wanted to be a revolutionary; I wanted to figure out how to change the social conditions for everyone around me.”

It was 1995 and, at the time, Simon was deeply involved with the Center for Young Women’s Development in San Francisco, a non-profit that delivers peer education and advocacy training that helps high-risk young women become positively engaged in their communities. Simon, a teen mother who grew up in low-income housing in the City’s Western Addition, had begun slipping into truancy and minor scrapes with the law. Through the Center, she found purpose in conducting STD education and outreach to the homeless, prostitutes, and drug dealers. A year later, she was named executive director of the organization and, at only 26 years of age, received a MacArthur “Genius” Fellowship for her effective leadership there.

She went on to work under Kamala Harris in the San Francisco District Attorney’s office, where she created a successful reentry program to help non-violent first-time low level drug offenders get jobs, enroll in school, and improve their lives. The program reduced recidivism to less than 10 percent and has been replicated across the country. This May, Simon not only graduated from Mills with her bachelor’s degree in public policy, but also delivered the College’s Commencement address.

“What got me out of trouble and onto this path of making change was that a lot of folks, at different points in my life, said, ‘Lateefah, you should try this,’” she explains. A high school teacher, recognizing her passion and facility in speech and argument, encouraged her to sign up for the debate team— a move that kept her academically engaged and, through travel to competitions throughout the state, showed her a different world. “I met affluent kids who understood how to articulate their own stories, and also the world’s,” she says.

Harris, too, was an inspiring yet demanding mentor. “She saw something in me that I didn’t see in myself as a young organizer. She rarely smiled at me but loved me at times more than I loved myself,” Simon says. “Great leaders impose an expectation for excellence but also, when things get hard, that person embraces you.”

Simon’s own experience, after all, could have been theirs, which gives her a deep sense of obligation to create the best possible options and outcomes for others. And the best way to do that, she has found, is to gain access to the systems that perpetuate injustice and change policies from the inside. “My responsibility is to be a voice in spaces that people who grew up like me are rarely in,” she says. “I believe in justice. I want to be in a world that is kind and that is safe, where everyone has the same opportunities. ”

“I realized that if I continue to wait for people to speak for me, I’m going to be just waiting. At some point, we have to realize, ‘Hey, it actually might be me who can do this.’ Are the people in positions of power smarter than I am? No. So, I’m not going to stand outside their office with a bullhorn. I’m going to take their job.”

To get that job, however, she knew that a college degree would be a great advantage, even given her previous record of achievement. And she had seen the difference that education made for hundreds of girls who had gone on to college after being involved in the programs she was running—they were now doctors, attorneys, civic leaders, bankers.

The transition to the college environment wasn’t easy, she says. She chose Mills for its focus on social change and women’s empowerment, and for its strong sense of community. Despite already having led a major nonprofit organization, in her first semester Simon felt both intimidated by the academic achievements of her classmates and overwhelmed by the array of resources available on campus. The measured pace of college study also was a jarring change from the immediacy of her advocacy work, where daily decisions could literally be a matter of life and death. But she came to treasure the luxury of reflection. “One of the things I love most at Mills was being able to stop for a moment, to just sit and listen to a lecture,” she says. “I want to hear and I want to understand. That’s how I learn.”

Still, Simon’s expertise and interests led to multiple detours along her college path. In 2008, she left school mid-semester after being recruited to serve as executive director of the San Francisco Lawyers’ Committee for Civil Rights, where she refocused the organization’s activities on criminal justice services. “I did not have a law degree and I did not have a college degree,” she says with a laugh. “But the Lawyer’s Committee was doing mostly poverty-centered work, and I didn’t think it was living up to its mission.” Under her leadership, the organization implemented community-based initiatives, including the Second Chance Legal Services Clinic, which helps clients overcome barriers to employment and housing due to past arrest and conviction records. But she soon returned to Mills, which she had come to think of both as an intellectual home and a personally supportive community. It was Mills professors who fostered her scholarly development. It was Mills women who comforted her after the death of her husband, journalist Kevin Weston, in 2005, and who remain her closest friends. And it was the institution itself that would not allow her to fail. “My Mills experience is all about people trying to figure out how to make it work for me,” she says. “Even in my darkest days, I never thought that Mills would give up on me. They keep after you, right?”

It’s an experience she sees as integral in the quest for a more equitable society. “College allows you an opportunity for exploration that poverty denies. I want that for every young girl, for every young person,” she says, adding: “A gendered education, in particular, is critical in these times.” While government policies and social attitudes affect women’s health and earning capacity, human rights for queer and trans people, and educational access for all children, she argues, women’s colleges have a unique ability to develop principled leadership grounded in deep knowledge and awareness.

Most important, she says, “Mills gave me a lexicon—it gave me the language to understand and express a lot of things that I was experiencing in my life. Such knowledge shifts narrative and shifts people’s realities. ”

Now with a Mills degree added to her arsenal of tools and experience, Simon currently juggles three jobs: she is president of the Akonadi Foundation, an Oakland organization that funds racial justice efforts and cultural expression; is serving a term as trustee of the California State University system; and, in November, was elected to the BART Board of Directors. (Simon, who is visually impaired, has never driven and relies on public transportation.) The range of issues she’s addressing may seem disparate but, in Simon’s view, they’re inextricably related.

“My focus and my priority is for us all to be free,” she says. “I am a woman, a black woman, a woman with a disability. I am a mother, a widow, an aunt, an educator. My life is intersectional, as is everyone’s. So I cannot do work in housing, education, and criminal justice without understanding the rights of LGBTQ people, for example. Working in Oakland, I have to consider gentrification, disability rights, transit. Whether I’m in a BART board meeting or discussing policies at Cal State University, all of these things are different parts of the same story.”

This comprehensive view took root early in Simon’s life, when she saw the commonalities between the young women she was working with, regardless of their race or circumstance. It came into clearer focus at Mills, when she learned about theories of social stratification in Bruce Williams’ sociology class—which she had already seen in action in her advocacy work—and when she traveled with Professor of History Wah Cheng to do fieldwork on organizations supporting disadvantaged female workers in Hong Kong and China.

“It was amazing to realize that the issues of poverty and redevelopment and gentrification and displacement happening in Beijing were the same as what was happening in the neighborhood where I grew up,” she says. “Across communities, even across countries, our lives are so different and yet so much the same. We need to understand each person’s journey—their social, political, historical, and economic story. We need to see their humanity. ”

In the 22 years since she forged her revolutionary resolve, Simon has achieved much in improving social conditions for some of the most marginalized people and has been rewarded for her work. She was a 2014 Social Entrepreneurs-in-Residence Fellow at Stanford University, and her efforts have been recognized with the Jefferson Award for outstanding public service, the Levi Strauss Pioneer Activist Fellowship, the New Frontier Award from the John F. Kennedy Presidential Library, and inclusion on the Chronicle of Philanthropy’s 40 under 40 list, as well as accolades from the Ford Foundation, the National Organization of Women, O Magazine, and Lifetime Television. “Yes, I have received awards, but people are still poor, women are still in prison,” she says. “This is not just a career; this is my life’s work. And while I have a little bit of a platform, I want to use it to complicate our conversations.

“It’s important for us to envision that another world is possible. I’m part of a movement that’s much larger than myself, this thing called justice, and there are many different paths that we can take to achieve it. Every day, we all have a job to do, and we have to be simultaneously pragmatists and visionaries as we move our society, incrementally, towards this goal.” ◆