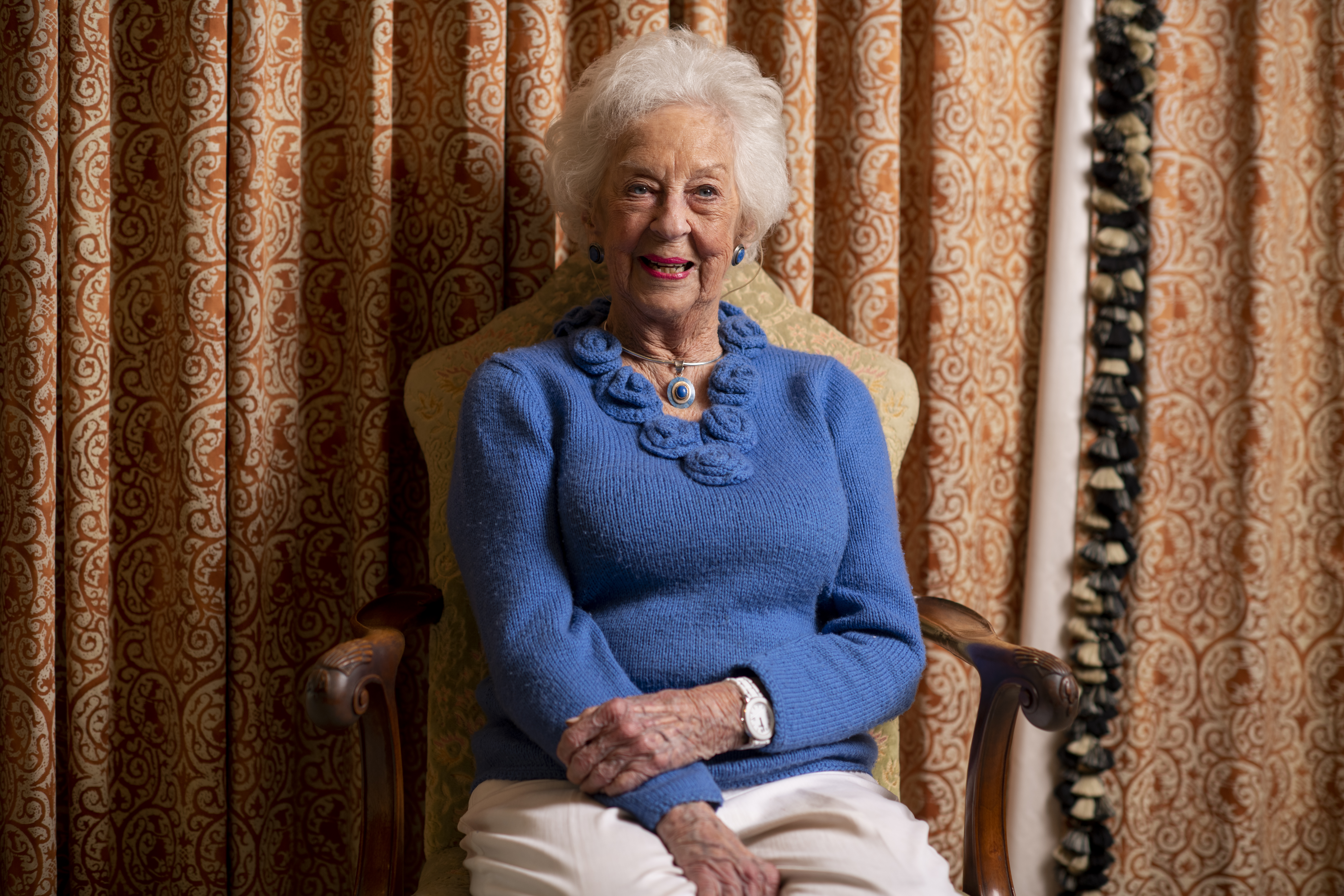 A Free-Spirited Life Launched By Dance

When Eleanor Stauffer Neely ’38 arrived at Mills College as a freshman in 1934, she had never heard of modern dance. Back in her hometown of Phoenix, she had studied ballet and danced in vaudeville-like performances in movie theaters before the main attraction.

But Mills in the 1930s was becoming a hub for a liberated, expressive dance style paired with percussion-heavy and sometimes discordant music. Neely was soon hooked on it.

“Oh, I just fell in love with it rather than ballet,” Neely said in a recent interview. “It was freer. That was the whole point of it.”

Neely is now an energetic 102-year-old with snowy hair and a sunny personality. She still has a dancer’s poise and straight back. On a recent morning at her apartment in a senior community in Scottsdale, Arizona, she described how those first modern dance classes some 85 years ago at Mills set her on course for an adventurous life.

Neely’s arrival at Mills coincided with the first year the College offered dance as a major. She studied under Tina Flade, a young German rising star in modern dance who had just begun teaching at Mills. “Tina was a wonderful, wonderful teacher,” Neely said. “She was this tiny little nervous thing.” The 1936 yearbook photo of Dance Club, from Neely’s sophomore year, shows her and four other students in matching long-sleeved tunics. They all balanced on one arm with one leg extended and the other arm shooting up to the sky. Flade lunged next to them, with her chin up and dark hair falling behind her.

One of Neely’s photo albums includes a series of black-and-white portraits of herself from that era. They show her on a grassy lawn, barefoot and smiling as she cartwheeled and vamped for the camera.

When the Bennington summer session ended, Neely did not return to Oakland to start her junior year at Mills as originally planned. Instead, she followed Holm, her instructor, to New York City to continue studying at Holm’s renowned studio.

Neely’s move to New York City did not faze her parents. “I remember my father saying, ‘We just never know what she’s going to want to do next,’” she said. Her father, Charles Stauffer, was the publisher of The Arizona Republic at the time, and her mother, Edith, prompted the newspaper society pages to keep track of Neely’s activities.

“Phoenix Girl Wins Honor” read one Arizona Republic headline in February 1937, when Neely was chosen to be part of Holm’s elite group of traveling dancers. As part of the group, she performed at college campuses all over the country. Her mother sometimes traveled from Phoenix to watch.

More than eight decades later, Neely has not forgotten the feeling of a particularly dramatic leap she mastered under Holm’s instruction. “It was just full freedom,” she said. “It was like a bird flying.”

Neely also remembers attending shows in New York City, often from the highest, cheapest seats in the theater. “The Rockettes were like little dolls. I couldn’t get much of an impression,” she said. Of course, a former Rockette is now a neighbor in her Scottsdale senior community, she quipped.

A back injury ended Neely’s burgeoning dance career sometime in the late 1930s. She underwent surgery and could not return to the dance studio, but she did return to Mills. By then, her original class had graduated, and she lived in graduate housing with other students closer to her age.

She spent most weekends in San Francisco, where her older sister Dorothy lived with her husband near Golden Gate Park. Neely remembers picnics and beach trips, followed by Sunday ferry rides back to Oakland at dusk.

Sometimes she would go on dates with Stanford men, who would invite her for walks through the eucalyptus groves on the Mills campus. One time, she remembers, she and a date were robbed at gunpoint on a road above campus.

Neely switched her major to psychology. She remembers performing at the top of her class and a professor nudging her towards graduate school.

Instead, after graduating Mills in 1941, she moved to San Francisco to look for a job. She tried out for a typist position at Bethlehem Steel, even though she did not have much typing experience. (At Mills, a friend who owned a typewriter had typed Neely’s college papers for her.)

“I typed minus 10 words a minute,” Neely said with a laugh. “And they gave me a job because they needed bodies.”

World War II had begun and Bethlehem Steel, which built ships, was expanding. She roomed at a boarding house, which is where she met her future husband, a Stanford graduate named Guy Neely. They married in Reno in 1943 while he was working as an accountant for the Navy.

The couple had four daughters and eventually moved back to Neely’s hometown of Phoenix. Her youngest daughter, Patty Flynn, remembers growing up with a mother who would pirouette from one end of the room to the other and eagerly sampled new food and experiences.

“She always said, ‘Find something new and interesting to talk about at the dinner table, always have it in reserve,’” Flynn said. “She was always on the frontier of ideas.”

Neely began practicing transcendental meditation nearly 50 years ago, long before most Americans had heard of it. She still does mindful breathing every day.

Her spirit for adventure has not faded with age, either. Neely snorkeled in the Galapagos Islands at age 89 and she traveled to China in her nineties. She has celebrated the births of 11 grandchildren and six great-grandchildren, though her husband passed away in 2006.

And hanging on her bedroom wall is one of her most treasured possessions: an ink image of her former mentor, Hanya Holm, dancing in a full skirt. It’s a daily reminder of her own foray into the cutting edge of modern dance all those years ago. ◆